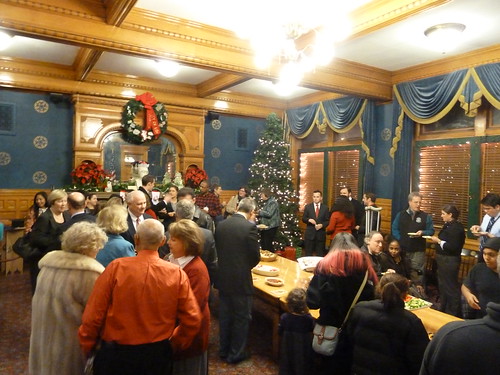 The Mayor’s Reception Room in Lowell City Hall was packed with people earlier this evening for the annual Mayor’s Christmas Party. An excellent buffet was provided by UTEC Catering; music came from a Lowell High band combo; and entertainment was provided by The Magnificent Henri, a mesmerizing magician who moonlights by day on the City Manager’s staff as Henri Marchand. Santa made a visit, of course, and nearly a ton of food (shown below) was collected for the Merrimack Valley Food Kitchen. The raffle of two Patriots tickets – you got a raffle ticket for each pound of food you contributed – was won by City Councilor John Leahy who was unfortunately absent when his name was chosen (he gets the tickets anyway).

Besides Mayor Murphy and City Manager Lynch, City Councilors Marty Lorrey, Vesna Nuon, Bill Martin, Rodney Elliot, and Joe Mendonca were there was were School Committee members Dave Conway, Kristin Ross-Sitcawich, Kim Scott and Robert Gignac. State Senator Eileen Donoghue and State Representative Kevin Murphy were also in attendance. Everyone seemed relax and in a festive mood and, when the amount of food collected is considered, the event has to be judged a great success. 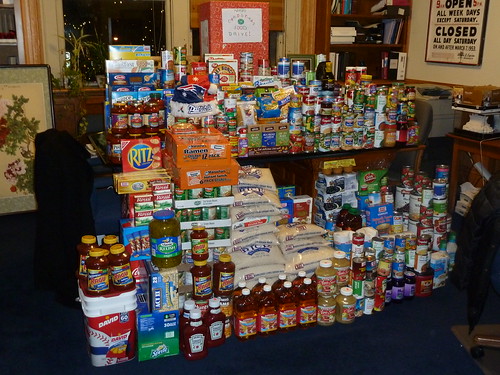 One Response to Mayor’s Christmas Party