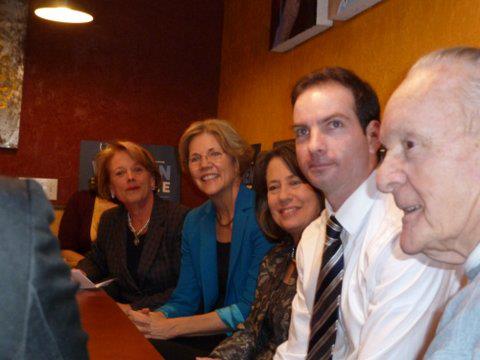 Sheila Bair, a Republican from Kansas who led the Federal Deposit Insurance Commission (FDIC) from 2006 through 2011, endorsed Elizabeth Warren’s candidacy for the US Senate yesterday. During a Business Roundtable discussion at Lowell’s Mambo Grill yesterday hosted by Congresswoman Niki Tsongas (shown above along with, from left, Elizabeth Warren, Sheila Bair, Lowell Mayor Patrick Murphy, and Arthur Ramalho), Bair spoke with great admiration for Warren’s work in Washington during the 2008 financial crisis when Warren and Bair became the most aggressive advocates for consumers and ordinary people when the rest of Washington was focused almost exclusively on Wall Street. In response to media questions about Warren’s ability or willingness to work across party lines, Bair stated unequivocally that she knows from her own experience that Warren will work with anyone who has good ideas regardless of party.

During the discussion of small businesses, both Bair and Warren were effusive in their praise for credit unions and local banks which have demonstrated a willingness to extend credit to local small businesses, particularly start-ups, who are frozen out by big national lenders. Local financial institutions, because they know intimately the people and the place and the product involved, are more willing and able to assist folks that don’t fit the one-size-fits all criteria of the national banks. Hearing from the many small business owners there yesterday, the people who open new ventures in vacant downtown storefronts, you got the clear message that their struggles are born in finding customers and credit, not in excessive regulation or taxes. These are the small businesses that drive the economy, not the multimillionaire hedge fund managers who, just because they file a Schedule C on their tax return, are sometimes misleadingly called small businesses as well.

Besides Congresswoman Tsongas and Mayor Murphy, yesterday’s event was also attended by city councilors Bill Martin and Marty Lorrey, former Mayor Jim Milinazzo, and former councilor Franky Descoteaux, who as owner of the Mambo Grill, was also the host and a participant in the discussion.