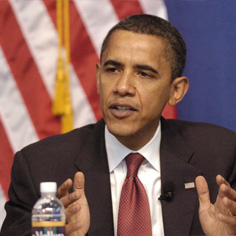 For the past couple of years, there has been a political critique in the air that was especially favored by national Republicans. The charge was (is) that the economy is lagging because of deep “uncertainty” in the “business community” about what to expect in the areas of taxation, regulation, monetary policy, federal spending, the whole package. To me, that was a cover story to stall for time until November 2012. Anyone watching closely had a pretty good idea of what President Obama was already doing and would like to do if Congress would back him up. The uncertainty was whether his opponents would be able to tip him over in the 2012 election, and he is looking like a better bet this week.

But there is another kind of uncertainty that hasn’t had a lot of play. I wonder if independent or unenrolled voters are quietly moving toward the president because this may not be the time to shake everything up with a change in administrations. The political uncertainty brought about by a new president and that person’s team is a valid concern. Top that with a new dynamic in Congress if the Democrats and their independent friend Sen. Bernie Sanders of Vermont maintain a majority in the Senate and also chip away at the GOP majority in the US House (the Dems are not likely to take back the House this time around). The events this week showed the benefits of steady leadership in foreign affairs with President Obama keeping both hands on the wheel of state at the White House while in the parking lot across the street Mitt Romney was peeling out and doing donuts to impress his posse.

Even people who do not agree with President Obama all the time may be looking closely at the political options, stock market trend lines, Federal Reserve actions, unpredictable global scene, and expressed domestic policies of Obama—and deciding to stay the course. There’s a cartoon being Shared on Facebook that shows Presidents George W. Bush and Barack Obama. The caption says it took one guy eight years to make the mess, so the other guy should get eight years to clean it up. More people may be thinking this way.