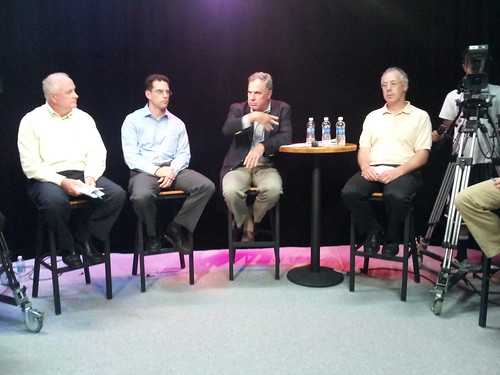 On the occasion of the sixth anniversary of his hiring as Lowell City Manager, Bernie Lynch invited members of the media, mainstream and new, to appear with him for 90 minutes on Lowell Telecommunications last evening and discuss the issues of the day. Joining the manager from City Hall were Tom Moses (finance), Adam Baacke (planning) and Ralph Snow (public works). From the media were Lyle Moran and Chris Scott of the Lowell Sun, Ted Panos of WCAP and local bloggers Corey Sciuto, Jack Mitchell, Gerry Nutter, Mimi Parseghian and me.

The program began with a brief overview by the manager of his administration’s accomplishments. He cited finances as a big one, saying that he “didn’t realize the scope of the budgetary issues” he had inherited. Today, he said, the city is in the best financial shape it’s been in for at least twelve years; we’ve held the line on taxes; and we’ve done it in a way that’s sustainable. Economic development has been a good experience. We need to do more with infrastructure although much has been done with water, sewer and road projects. Lynch said that he’s promoted partnerships with neighborhood groups and that he’s brought more accountability and professionalism to City Hall as well as a team approach that cuts across departmental boundaries to get things done.

The media members then had the opportunity to ask questions. I have many notes and I won’t try to provide a transcript, but here are some of the highlights of what was said:

Mimi from Left in Lowell asked the first question which was about the makeup of city boards and whether they are reflective of the city’s population. The manager said he’s tried to diversify various boards with women making up 56% of his appointees; a number of appointees have been Southeast Asian however the number of Latinos he has been able to report has been “lagging.” He said the real issue was civic engagement and he cited the annual “public matters” leadership training program as perhaps increasing that. Chris Scott asked a related question about the number of vacancies and hold-over appointees on city boards. Lynch said he didn’t know the number “off the top of my head” although he did say he’d soon be announcing a new appointment to the planning board and that a number of hold-overs would soon be resolved. Scott followed-up with a question specifically about the License Commission, suggesting that everyone but them was “on the same team” and asking the manager to comment on recent actions of that board. Lynch began by saying “I have to be careful because those actions are still under review but I am disappointed by the failure of the License Commission to act.” When pressed by Scott about the possibility of asking for the resignation of the Commission members, Lynch said “everything is on the table.”

Gerry Nutter asked the manager to cite three “mulligans” he would take on past decision. Lynch said he could have done a better job of communicating with the council, particularly on Lowell Housing Authority issues and he also said there were some “job hires” he regretted without naming names. He said there were plenty of other things he would have done differently but he couldn’t single any one of them out as a third reply to Gerry. In reply to a follow-up question, Lynch said that “the reorganization of the Inspectional Services Department has been one of my top accomplishments.”

In response to a question about perceived delays in the Hamilton Canal District development, Lynch handed the microphone to Adam Baacke who shared some good news. The Freudenberg building, now known as 110 Canal Street, will be ready for occupancy next June and the new Judicial Center will go out to bid in 2013 and will be ready for occupancy in 2016. The extension of Jackson Street, which will impact the intersection of Dutton, Thorndike, Fletcher and the Lord Overpass is more complicated. Overall it is a $7 million project. While the city searches for federal funding to help with that, portions of the plan will be done incrementally in conjunction with the construction of the court. Because of these events, Trinity, the city’s developer of the site, has now commenced design of two new residential buildings for the site as well as a new commercial building that will be constructed adjacent to the Judicial Center. Baacke stressed the importance of this because while the city has become a national leader in the re-use of old mill buildings, there have not been many new commercial buildings undertaken here or elsewhere since the collapse of the real estate market.

One final note. In the midst of an extended discussion of employment statistics, Lynch said that he soon will be announcing plans of a major regional employer that is now located in a neighboring community to relocate within Lowell’s boundaries. As I said, many other issues were discussed but space and time keeps me from sharing them here. When I get the replay schedule of the program from LTC, I’ll do a post with that info. 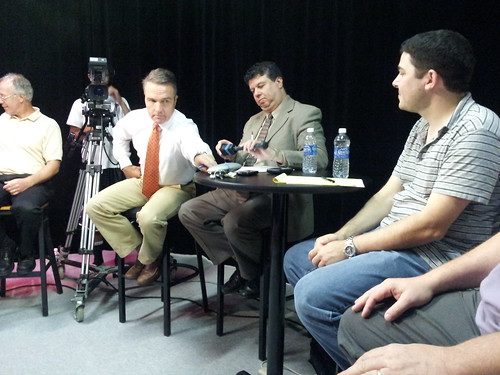 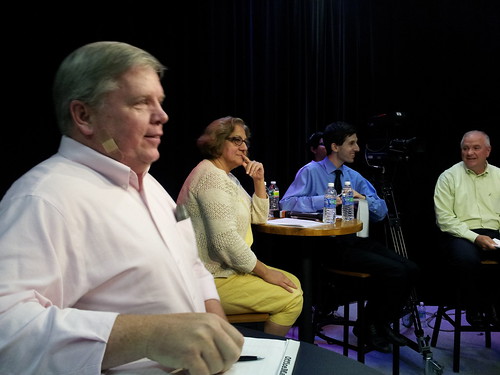 5 Responses to City Manager meets the media on LTC