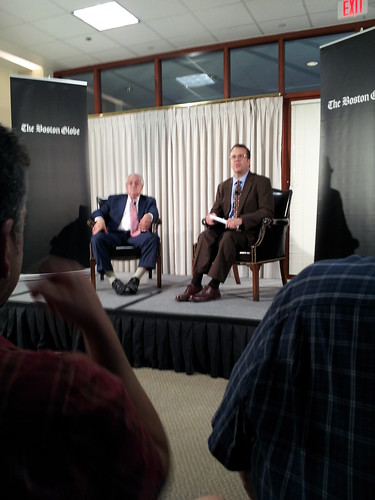 About a month ago I opened the Sunday Boston Globe and saw an ad for an event that would feature Globe political reporter Glen Johnson (who used to work at the Lowell Sun) interviewing outgoing Congressman Barney Frank. While attending would require traveling to Morrissey Boulevard and the Globe’s headquarters, it was also free so I signed up. The journey was easy thanks to public transportation: Commuter rail from Lowell to North Station and then a couple of short subway rides and a 5 minute walk was all it took. The nearly 200 people in attendance were treated to 90+ minutes of Barney’s analysis and philosophizing in response to Glen’s prompts as they sat in two easy chairs on a small riser at the front of a long, narrow room on the third floor of the Globe’s building (as shown in my fuzzy cellphone photo above).

Here are some of the points made by Congressman Frank:

Same Sex Marriage. He was somewhat critical of the LGBT community for being too ambitious in its legal strategy regarding same sex marriage. “Being right is a necessary condition for winning but it is not sufficient by itself,” he said. He had great praise for Attorney Mary Bonauto who, among other accomplishments, was the lead lawyer in the Goodrich case that established same sex marriage in Massachusetts back in 2003. Frank called her the “Thurgood Marshall” of the same sex marriage movement, saying that the LGBT community should study and adopt the strategy and tactics employed by Marshall while head of the NAACP in its pursuit of voting rights. Frank was very optimistic, however, stating that “within 10 years a majority of Americans will live in jurisdictions that recognize same sex marriage.”

Kevin White. Glen asked Congressman Frank to assess Kevin White, who as mayor of Boston was Frank’s first political employer. Here’s Frank’s assessment: Kevin White was elected in 1967 when Boston was very divided on race and that forcing the city to acknowledge that racism had been built into the operation of city government was very painful to acknowledge. White did this and he also hired many very capable women into very important positions in his administration. Another major accomplishment of Kevin White was blocking Interstate 95 from going directly through downtown Boston (that’s why Route 95 piggyback’s onto Route 128 for a good portion of that road’s existence). White was the first big city mayor to see that putting a super highway through the middle of your community was not a good thing.

But in the 1970s, White “became very angry.” The first factor in that was his non-selection as vice president by George McGovern. In Frank’s telling, McGovern had all but announced White as his selection, but the Massachusetts delegation to the Democratic National Convention protested because White had supported Muskie in the primaries and not McGovern. McGovern relented and hurriedly selected Missouri Senator Thomas Eagleton without fully vetting him. Within hours it became known that Eagleton had undergone electroshock therapy for depression which led McGovern to drop Eagleton and select Sargent Shriver. In all, it was a damaging fiasco. Next came busing in Boston to achieve racial integration in the schools with all the disruption that entailed. Then White and his administration became the subject of an aggressive (and ultimately futile) corruption investigation. Finally, in 1975 he only narrowly won re-election versus Joe Timilty. In Frank’s view, all of these things combined to make White very angry and he focused on consolidating his political power to the detriment of other things. Viewing White’s career it it’s entirety, Frank said Kevin White was a very positive figure, having integrated and humanized Boston.

Congressman Frank also spoke at length about the financial collapse and “the Tea Party Summer”. Check back tomorrow for my report on those comments.