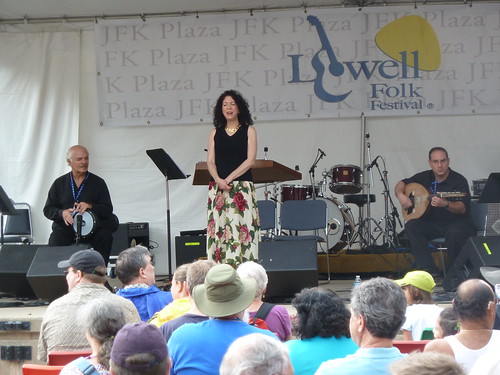 The 2012 Lowell Folk Festival ended several hours ago and I want to record my observations before they fade. My vantage point was different this year. I had volunteered to staff the Elizabeth Warren information table in the Free Speech area in front of Lowell City Hall. I was there Friday night, all day Saturday (or at least until the heavy rain came) and all day Sunday. Although that spot wasn’t on a heavily traveled route, it was a great place to see people who passed by so I enjoyed it very much. When relieved of duty occasionally, I ventured forth to other corners of the Festival, feasting on Armenian and Polish cuisine with Heritage chocolate ice cream for dessert. Although the crowds didn’t seem huge by past standards, several ethnic food vendors told me they exceeded their income from last year. While the weather often looked ominous, only late on Saturday afternoon did it rain. I’m sure there were some glitches but from everything I saw, it was another very successful Lowell Folk Festival.

Regarding the Free Speech zone, next year is a municipal election and candidates for those offices would probably do better roaming through the crowd than hanging in one spot. But I do think the space in front of City Hall has great potential as a temporary gathering spot for those who want to temporarily step away from the music and discuss politics, perhaps while enjoying a pierogi. Maybe next year we can set up a “blogger’s table” in the Free Speech zone as a way of promoting Lowell’s blogosphere. Bloggers are experts at speaking freely, so it would be a perfect spot for them (us). Something to consider. 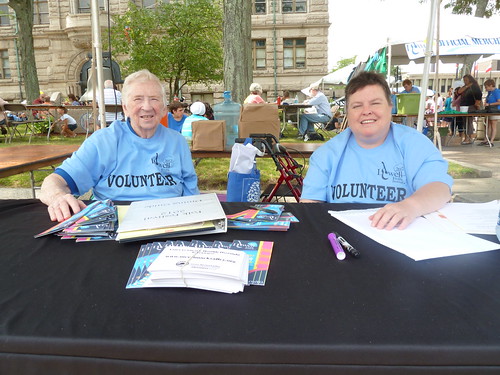