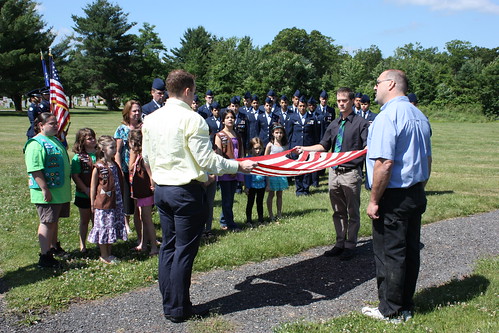 The Global War Veterans of Greater Lowell conducted a Flag Retirement Ceremony today at Lowell’s Westlawn Ceremony. Shown above are three members of the Global War Vets (from left, Greg Page, Eric LaMarche and Thayer Eastman) with members of the Lowell High School Junior Air Force ROTC detachment and a local Girl Scout/Brownie troop also participating in the ceremony along with members of the Greater Lowell Veterans Council. In the above photo, a tattered flag is being inspected by the officer in charge of the ceremony. That flag is run up a flagpole, saluted with the Pledge of Allegiance and then run down the pole. The blue field containing the 50 white stars is then cut from the rest of the flag and is treated separately, symbolizing the inseparability of the states. The flag and others in like condition are then laid atop a fire pit and burned as everyone respectfully looks on. The Global War Veterans conduct this ceremony several times each year.