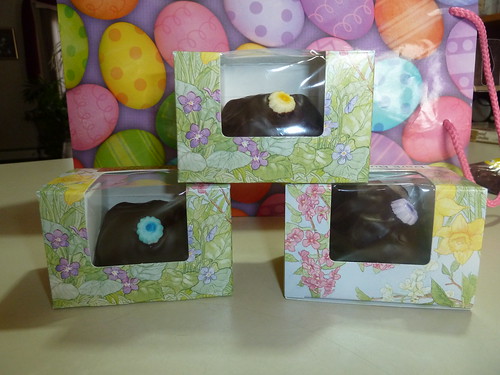 The Easter Bunny delivered three dark chocolate butter cream eggs to my basket overnight. In doing so, he – why we assume the Easter Bunny is male is another matter – sought to teach a lesson in comparison shopping. The three eggs appeared identical. Each one weighed 4 ounces, contained the exact same ingredients and was packaged in an identical box. But each had a different price tag. The one on the left in the above photo was from Colonial Candies of Bolton, Massachusetts – formerly known as Hebert’s. That one was least expensive at $5.95. The one on the right was from Van Otis Chocolates of Manchester, New Hampshire. It cost $6.00. The one in the middle was from Mrs. Nelson’s in Chelmsford. It cost $7.95.

Given the current cost of gasoline and the relative distance of the three vendors from Lowell, Mrs. Nelson’s might turn out to have been the best bargain if someone from Lowell had been the purchaser. But the eggs came from the Easter Bunny and there’s no telling what method of transportation he uses.

3 Responses to Comparison shopping with the Easter Bunny