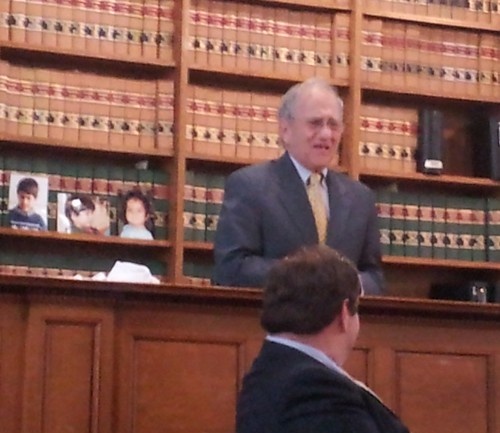 The Greater Lowell Bar Association held a retirement celebration for the Honorable Paul Chernoff today at the Lowell Superior Court. Judge Chernoff, who has sat at the Lowell courthouse more than perhaps any other Superior Court judge over the past decade, had officially retired several years ago upon reaching age 70 but had been recalled to duty due to a heavy caseload and personnel shortages. Judge Chernoff was presented with proclamations by retired Supreme Judicial Court justice Judith Cowin on behalf of Congresswoman Niki Tsongas and by Superior Court Chief Justice Barbara Rouse on behalf of State Senator Eileen Donoghue. State Representative Kevin Murphy and Lowell City Councilor Kevin Broderick, both practicing attorneys, were present with citations from their respective bodies.

In his farewell remarks, Judge Chernoff spoke eloquently and affectionately about Lowell. He said that with his seniority he could have opted out of sitting in Lowell for at least the last two decades but that he always chose to come here because of the lure of the staff and attorneys who populate the Lowell Superior Courthouse. He always felt like part of a family when he was in Lowell. He called the late Brian Dunigan, Michael Brennan and Joe Mahoney (all of the clerk’s office here) his three Irish brothers and went on to compliment judicial secretary Bonnie Dineen.

Judge Chernoff said that the court staff and the lawyers make Lowell different than anywhere else. He’s not sure why; perhaps people in Lowell “have a better understanding of the human condition.” He also said there is a “higher level of civility here than elsewhere” which was something he learned “at the knee of Elliot Cowdrey, Cornelius Kiernan and David Williams in the Lowell District Court” (where Chernoff frequently sat from his appointment to the District Court in 1976 to his elevation to the Superior Court in 1984).

As his final day of service neared, Judge Chernoff said the court officers frequently said he couldn’t leave because there were still too many cases to be disposed of. To that sentiment, Judge Chernoff turned to Robert Frost for a response, reading the first few lines of Frost’s poem, “After apple picking”:

My long two-pointed ladder’s sticking through a tree
Toward heaven still,
And there’s a barrel that I didn’t fill
Beside it, and there may be two or three
Apples I didn’t pick upon some bough.
But I am done with apple-picking now.

As for his decision to leave now, Judge Chernoff said he had concluded he should leave before he started feeling burned out and before other people thought he was becoming burned out. He closed with a portion of another Frost poem which he said should be in the mind of all judges. The poem was “Fear of God”:

If you should rise from Nowhere up to Somewhere,
From being No one up to being Someone,
Be sure to keep repeating to yourself
You owe it to an arbitrary god
Whose mercy to you rather than to others
Won’t bear to critical examination.

As a fellow occupant of the courthouse, I can say that Judge Chernoff will truly be missed. His demeanor was always cheerful no matter what the circumstances and he was in some ways affectionately unpredictable. Summer mornings before the building opened to the public, I was often startled by the sight of Judge Chernoff clad in shorts and protective helmet wheeling his bicycle through the metal detector after having ridden it here from his home in Concord. I understand he once came via the Concord River in a canoe. But my favorite Judge Chernoff story comes from years ago, back when I was practicing law. Opposing council and I both ventured into the Judge’s chambers for some type of pretrial conference. It wasn’t a very contentious case nor a busy day and the topic of summer vacations came up. Judge Chernoff remarked that his most interesting summer vacation was the year he and his wife both volunteered to spend a month on active duty with the Israeli Army. When they first arrived, the assignment officer began quizzing them. Mrs. Chernoff was a dental technician so she was immediately assigned to the base infirmary. The officer than turned and asked “what do you do in civilian life, Mr. Chernoff?” – “I’m a judge.” – “Do you have any useful skills?” – Judge Chernoff spent the summer in the motor pool and he clearly relished sharing the story which I think illustrates what a special person Paul Chernoff is. 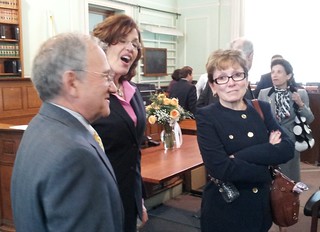