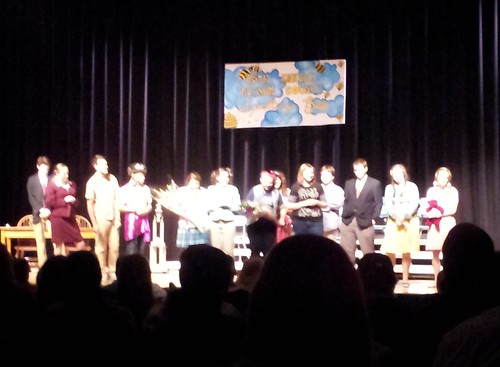 The Lowell High School Fine Arts Department gave the community another outstanding stage performance this evening, presenting The 25th Annual Putnam County Spelling Bee to a crowded Cyrus W. Irish Auditorium. The crowd which included many LHS staff members and School Committee members Jim Leary and Kim Scott was especially impressive because the play had also been performed Thursday night and last night. The student performers were amazing, especially considering that many of them were familiar from the late January LHS performance of The Crucible. For them to have shifted gears from that intense drama to this fun musical in so short a period of time is testament to their talent and dedication. All of the student actors exhibited remarkable talent and stage presence and the pit band accompanying them was terrific.

A special treat tonight was the presence on stage of celebrity spellers. They included LHS staff members Michael Arwe and Steve Gervais but the star of that group was Lowell City Councilor Rita Mercier who correctly spelled “atheist” after proclaiming that she had “never been one” but succumbed to a word that sounded like “thaposes” but which was incomprehensible never mind spellable so there was no shame in her early exit. While on the stage, Rita demonstrated some fancy dance moves and some amusing physical comedy (she tried to swipe the trophy as she was ushered off stage after misspelling her word). My only regret is that we didn’t get to hear her sing which truly would have made it a historic night.

So congratulations to all for another excellent LHS performance.