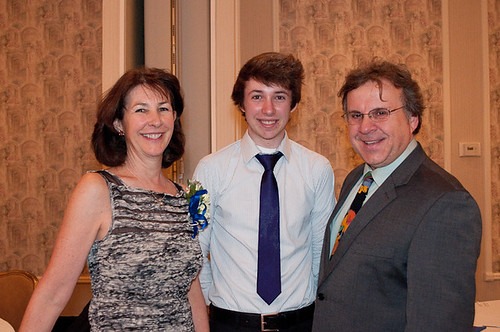 Fellow blogger Paul Marion was presented the Tom Kelakos Community Spirit Award last evening by the Kiwanis Club of Greater Lowell. Here are the remarks Paul made in accepting the award:

. . . . Tonight, I am receiving an award that I accept not only for my efforts but also on behalf of the groups and organizations that I have had the good fortune to be part of in the past 35 years— from my brother Richard’s art gallery on Hurd Street, Gallery 21, to the Human Services Corporation founded by Patrick Mogan and friends … from the Lowell Historic Preservation Commission, US Department of the Interior to the Flowering City Committee and Lowell Heritage Partnership … from the Cultural Organization of Lowell, COOL, to today’s UMass Lowell, which is loaded with talent and now riding Chancellor Marty Meehan’s rocket to the stars …. In all these cases I was part of a team of people who worked together to make Lowell a better community. In some situations I had opportunities to introduce ideas and manage projects to the point of completion.

We’re standing in Dracut at this address. Everyone thinks this is Lowell, but it isn’t. Intervale Park is back there, where my brother David, who is five years older than me, hit a double in Dracut Little League and broke his bat. What I remember most vividly is that the coach let him take the broken bat home as a trophy. We nailed and taped it and used that bat until it split apart. So, Dracut. I would be remiss not to say that my experience in public service began here, when I ran for school committee as an 18 year old senior in high school. My parents encouraged this surprising and somewhat “self-involved” decision. I was younger than Robert Gignac of today’s Lowell School Committee. It’s great to see young office-holders.

At a candidates’ night I quoted the ancient Greek statesman Pericles, who is said to have said, “A man who takes no part in public affairs some call quiet; we Athenians call him useless.” I believed that, and believed President Kennedy when he said, “Ask what you can do for your country.” I was late in organizing, like Newt Gingrich in the Virginia Republican primary, so I missed being on the ballot in 1972 and had to run on stickers. My school friends stood at polling places with stacks of mimeographed slips of paper telling people how to stick the sticker on the ballot so they could vote for me. We lost to the incumbent Bernard Bettencourt, 4000 to 400, but the earnest attempt led two selectmen to call me and offer me an appointment to the town Recreation Committee, which I took happily. I figured the next step was to run for Congress.

The concept of community has engaged me intellectually and emotionally since my college days studying political science. I see it as the foundation of the democratic process. If a person does not recognize that his or her interests are connected to the interests of his or her neighbor (near and far), then the system breaks down. Actually, it never coheres. In that scenario, we all become independent contractors who are determined to cut in line in front of the next person. How to make the social glue that sticks us together is the challenge that I’ve grappled with all these years. I think you can do a lot of good through action in a cultural context: arts and humanities and interpretive sciences, as the Mass Cultural Council frames the expressive disciplines. It’s education in the broadest sense, education toward enlightened thought and action.

I want to make a final point about the Lowell Reclamation Project that has fed my curiosity and fulfilled me in many ways since the 1970s. The book I’m writing this year for the National Park Service has a subtitle: Reclaiming Lowell’s Place and Story. Count yourself fortunate if you find a cause larger than yourself that draws you in and fuels your passion. The idea of recycling a city instead of kicking it into a ditch seemed a task worth signing up for. Paul Tsongas talked about generational responsibility. Patrick Mogan talked about shaping a positive sense of the future. Both men turned ideas into action. Everything they did required the help of partners, funders, collaborators, planners, builders, and stewards. As US Senate candidate Elizabeth Warren says in her speech that has gone viral on the web: Nobody becomes a success alone, not really. We’re all in this thing together.

Here’s what the poet Gary Snyder says about community: “Communities strong in their sense of place, proud and aware of local and special qualities, creating to some extent their own cultural forms, not humble and subservient in the face of some high cultural over-funded art form or set of values, are in fact what one healthy side of the original American vision was about. They are also, now, critical to ecological survival. No amount of well-meaning environmental legislation will halt the biological holocaust without people who live where they are and work with their neighbors taking responsibility for their place, and seeing to it: to be inhabitants, and not to retreat.”

It is remarkable to look back and see what has happened. Lowell is a work in progress, but a lot of the hardest work of rebuilding has been done. River cleaned up. Hundreds of structures improved. Population increased. New schools built. Culture invigorated. Medical and educational institutions expanded. Neighborhood activism strengthened. Purpose restored. The city has come a long way since 1970. Fortune Magazine and the National Science Foundation say we are in the middle of the sixth geekiest employment region in the United States. Inventors once, inventors forever, I guess.

There still are serious challenges in job creation, student success, social harmony, outdoor cleanliness, and other areas. That’s what makes it worth the effort. If you apply yourself to solve problems, you can see the results of your work. I think the city today is an appealing place for newcomers because there are miles to go before we sleep, and anyone new can make a difference in a city this size. The help is needed and welcomed.

That is a heck of a lot of community organizing and effective leadership, especially in the 1970s and ‘80s—a vast amount of collective action that set up the city’s advancement for decades to come. Prior to the 1970s, in the cultural sector just to pick an area, we had the Memorial Auditorium presenting shows, the Whistler House and Lowell Art Association promoting the visual arts, the Moses Greeley Parker Lectures on Sunday afternoons, and the Lowell Historical Society keeping the heritage flame alive, not to mention activities based around churches, temples, and ethnic and social clubs. Compare that landscape to what Lowell presents to the world now.

The New Lowell is less than 40 years old. Think of what happened in Lowell from 1822 to 1862. That’s the period that put Lowell in the history books. Some day historians will describe our time as equally historic. Many of you in this room, along with others not with us tonight, are responsible for making Lowell a better place to live and work and pursue happiness. It has been a pleasure and my good fortune to be in your company and to count you as friends and colleagues and co-conspirators. Thank you for this attention tonight. I will remember you.

I’m going to close with a poem. I don’t know when I’ll have 200 people in front of me again for a literary audience. It’s a prose poem about the idea of America. The poem was written in 2004 after a family visit to Washington, D.C.
“Checking the Property”
My nine-year-old son says, “I’m going to read the ‘Gettysburg Address’”—on the other side is the lesser-known second inaugural speech. What’s the Lincoln shorthand? Freed the slaves; saved the union. People crowd the marble steps at dusk. A sign asks for silence. When he sees my wife lining up a snapshot, a guy in a straw cowboy hat offers to take a picture of my brother’s family, my wife, son, and me in the glow of the civic temple. Climbing the steps, I caught sight of the figure set behind the columns, and then lost him because of the steep ascent, only to come upon the sculpture again near the top, where visitors gaze at the huge seated president, whose massive square-toed boot juts out, looking as if it could kick Jeff Davis’ football the length of the Reflecting Pool and onto the white spike of the Washington Monument, which, in the after-supper hour reflects sun along its narrow western face, a mighty glo-stik on the national common, a staunch obelisk, a big white numeral standing for the first president, who set the constitutional republic in motion, the stone blocks a different shade on the top half, marking a stop in work and resumption, the monument telling its own story, one in which protesters rolled cut stones into the drink, foreshadowing later protests and rallies and comings together, like the 1963 March on Washington that brought Martin Luther King to these same steps to declare his dream of a nation at last free for all, the same steps where Joan Baez and Bob Dylan sang for justice and where Dylan returned to sing for Bill Clinton’s booming inaugural, the same steps movie-land Vietnam vet Forrest Gump spoke from and from which he spotted his life-long love and source of ache splashing toward him, the same pool in which the spaceship crashed in the Planet of the Apes remake, this electric stretch of public land without timber or copper, a wide open space in which to make a verb of America—to recall and celebrate and to do democratic research and development in this red clay-lined lab, bordered and crowded with evidence of the ongoing experiment, and bearing key formulas and equations inscribed in stone.