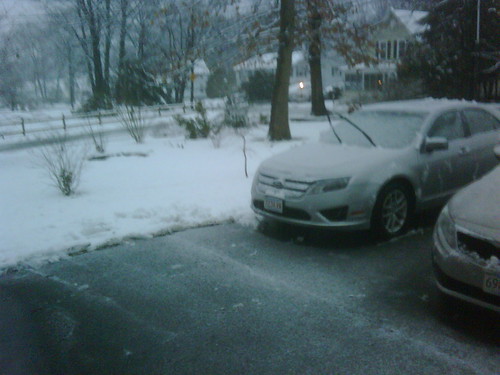 All winter long I’ve said we got all the snow I wanted this year before Halloween, a reference to the October 30, 2011 snowfall that knocked down trees and knocked out power for many days (five for me). Unless a whole lot more snow falls in the next few hours, this Leap Year storm will not amount to much. It began yesterday in Lowell at 1245 pm but even by 430 pm the snow was not yet sticking to the roads. The forecasters this morning almost apologetically explained that we did get a good amount of snow but that it was so heavy and the temperature was so warm (relatively speaking) that it rapidly compressed as it fell, leaving the impression that not much had fallen. That was confirmed for me when I went out to shovel and found less than an inch of slush in the driveway. Despite the relative lack of snow, the robocall from the city of Lowell announcing no school today was welcome. I still have to go to work, but the traffic will be much lighter.