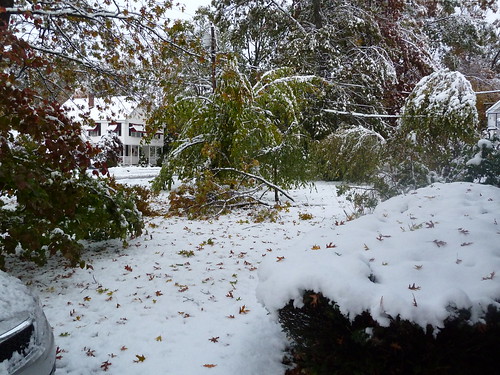 Somehow I thought the moment of power restoration would be more dramatic. Instead, I received a hurried phone call at work. “National Grid trucks are on our street now.” I hopped in my car with its “collision wrapped” rear window (see below) and zipped home, happy that all the traffic lights en route were functioning. Flipping the switch in the front hall, the ceiling light came on, a signal that our 106 hours of primitive living had come to an end.

The observations and lessons-learned from this episode are many and will be the subject of a later post. For now, a few words about electrical service. Power outages are nothing new around here. What I found is new is the unreasonably long time it takes to restore power. My sense is that in year’s past, electricity was usually restored well within 24 hours. If it went 48 it was a very unusual event. But then came the ice storm of December 2008. People here in the Highlands who lost power during that event went without for several days, not a handful of hours. Earlier this year, neighbors who had power knocked out during Hurricane Irene waited four days to have it restored. This time, we lost power at 1:12 am on Sunday, October 30 and had it restored five days later on Thursday, November 3.

Why does it take so long to restore power to so many people? My suspicion is that National Grid has pared back its workforce to such an extent that it has insufficient resources to effectively respond to completely predictable regional outages. The company has made a cost/benefit calculation that it is more profitable to incur the fleeting wrath of those who lost power than to maintain a workforce adequate to handle the task in a timely manner. In this the company is engaging in a type of bureaucratic rope-a-dope.

Rope-a-dope is a boxing tactic made famous by Muhammad Ali in his 1974 fight against George Foreman. Early in the fight, Ali simply covered up and leaned back against the ropes, letting Foreman pound away without mounting an active defense. Protected from the damaging blows by the flexibility of the ropes and his own forearms, Ali endured the early rounds unharmed. Not so Foreman. His early flurry of punches left him exhausted and, when Ali finally shifted to the attack, Foreman lacked the energy to defend himself and Ali won the fight.

It’s ironic that as we become more dependent on electricity for so many things that are critical to safe, not to mention comfortable living, our electrical service has become less and less reliable. We’re at the point where having generator back-up for your home is the new norm of life in the 21st century. That’s the reality. That’s also absurd. The technology of electricity hasn’t eroded but the service has. 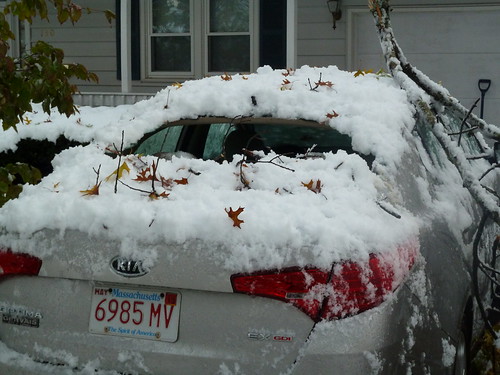 5 Responses to Electricity restored! Why did it take so long?