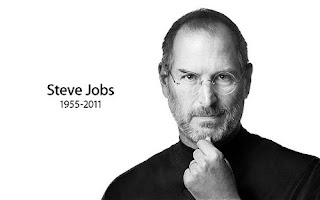 Last month when Steve Jobs resigned as CEO of Apple I wanted to write something about him and what he accomplished.
I didn’t.

Truthfully, I never felt confident enough that my meager writing ability could do Steve Jobs and his accomplishments justice.
I feel the same today as I try to digest his death.

I am not an Apple fanatic. In fact I own and have owned Windows PC’s all my life.
But Apple’s accomplishments are undeniable and Steve Jobs was the catalyst.
He was a game changer and the game he changed, altered the world.

Last night around 8:00PM I got a breaking news alert informing me of Steve Jobs’ passing on my iPhone 4.
I was stunned. Sure, I knew he was failing. Sure I knew it was only a matter of time…but every time I thought of Job’s inevitable death I thought maybe next month or maybe next week or maybe even tomorrow, but I never thought today. He could never die today. Jobs lived in the future.

As the media world grabbed the story of his death, I watched several shows celebrating the life of Jobs. More than once I heard him compared to another genius, Thomas Edison.
I disagree.

Edison was a scientist. He took electricity and made it light.
Steve Jobs was a time technician. He took tomorrow and made it today.

My favorite Jobs story occurred in 1983. Apple was emerging as a major computer company and Jobs needed someone to take care of the day to day business. He set his sights on Pepsi CEO John Scully. During their meeting Scully resisted Jobs’ offer to take over Apple. Scully told Jobs he knew nothing about computers. But the persistent Jobs knew what he wanted, and he wanted Scully. Here is how John Scully tells the story:

Steve was dressed in his mock turtleneck, blue jeans and running shoes. In those days, he had very dark hair and deep brown piercing eyes. He looks at his running shoes a long time. Then he said, ‘Do you really want to sell sugar water for the rest of your life, or do you want to come with me and change the world?’

And change the world he did! 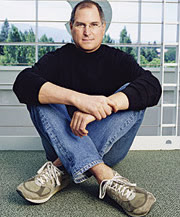