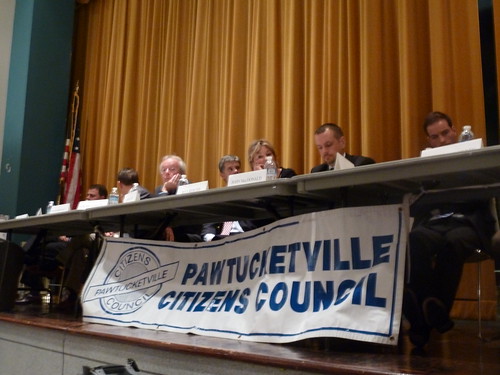 The Lowell Citywide Neighborhood Council presented its third City Council Candidate Forum tonight at the Wang Middle School. Set in the school auditorium, candidates sat on the stage behind a row of tables while organizers and audience members occupied the auditorium seats. The topic for this evening was “Finances, Taxes & the Budget.” In a two minute opening, each candidate was asked to address the following three questions:

1. What is the role of a Councilor?
2. What are the major elements of a balanced budget?
3. In our current budget, what is expendable, what is not, and how would you reduce costs and raise revenue?

The second portion of the forum was questions posed by audience members. The question would be asked, an organizer would pull a candidate name from a basket, and that candidate would have one minute to answer that question. Each candidate received one question.

The final portion of the forum consisted of a one minute recap by each candidate, with emphasis on what each of them would do as a councilor regarding city finances and the budget.

The event ran smoothly and was informative and entertaining (well, as entertaining as one of these things can be). The only real excitement occurred when challenger Fred Doyle arose to make his concluding remarks and his chair went flying off the stage. It soon became clear, however, that he hadn’t hurled the chair at anyone, but had accidentally pushed it off the side of the stage as he stood to speak. But all candidates were on their best behavior and the event was well-organized and well-run.

As was the case with the two previous forums, I video-recorded the opening and closing remarks of each candidate and will post them on YouTube with a link from this site. Due to some other commitments (namely, tomorrow night’s US Senate debate), the video clips from tonight probably won’t be online until Wednesday. In the meantime, if you want to see videos of the candidates at past forums, check out our 2011 City Council Election page which is located HERE.