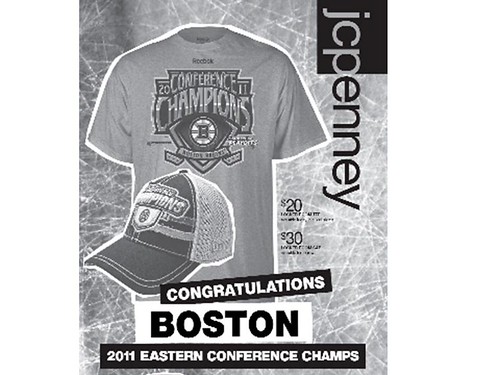 Superstitious Bruins fans were startled to spot the above JC Penney ad on page 11 of today’s Lowell Sun. The ad congratulates the B’s for winning the 2011 Eastern Conference Championship. The problem is that the Bruins haven’t yet won that championship. They could have done so last night, but they lost to Tampa, 5-4, which evened the series at three games and forced a Game 7 in Boston tomorrow night. Hopefully the Bruins will win. We wouldn’t want all those championship hats and t-shirts going to waste.

3 Responses to A bold prediction or an unfortunate jinx?