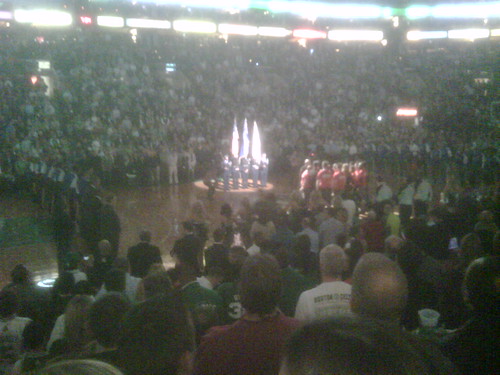 This past Monday night I traveled to the TD Garden to see the Boston Celtics play the Houston Rockets. The last time I had seen the Celtics in person, the starting lineup consisted of Larry Bird, Kevin McHale, Robert Parrish, Danny Ainge and DJ Johnson, so my pattern of going to a Celtics game once each era continues. Prior visits allowed me to see Dave Cowens, John Havlicek and even Bill Russell, the latter from a seat in the balcony that had decreased visibility in the second half due to the large amount of cigarette smoke that accumulated in the building as the game progressed.

All aspects of my 2011 trip were excellent except for the price of the ticket which was hugely expensive even though it was purchased directly from the Celtics and not from a reseller. And the ticket price for a game versus the lowly Rockets was only half the price of a ticket to see the Heat or the Lakers. The evening began at Lowell’s Gallagher Terminal where Andrew and I caught the 5:45 pm train to Boston. The train works great for events at the Garden. You pay $5 to park in Lowell, $13.50 for round trip train fare, and 55 minutes later, you step off the train and onto an escalator and then you’re inside the Garden ready for the game. (The 7:30 pm Celtics game finished at about 10 pm in plenty of time to catch the 10:40 pm train back to Lowell).

A bonus of Monday’s game was that we got to see the Lowell High School Jr Air Force ROTC color guard present the flag at center court for the playing of the National Anthem (pictured above with my grainy cell phone camera). Once the game began, it was great to see Shaq and Rondo and Pierce and Allen and all the others – except Kevin Garnett who was still injured – in Celtics uniforms. But the Rockets were fast and aggressive and the Celtics seemed old and slow. Every time the Celtics created some momentum, the Rockets raced down court and would sink a jump shot. It seemed the Rockets couldn’t miss, although afterwards I read comments by Celtics coach Doc Rivers that this game was the worst defensive effort by the Celtics in three years, which might account for the Rockets high shooting percentage. In the end, the Rockets prevailed, 108-102. It was a fun night. Perhaps I won’t wait 20 years to go to my next game. 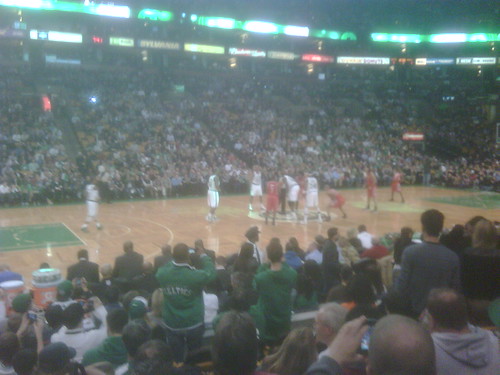