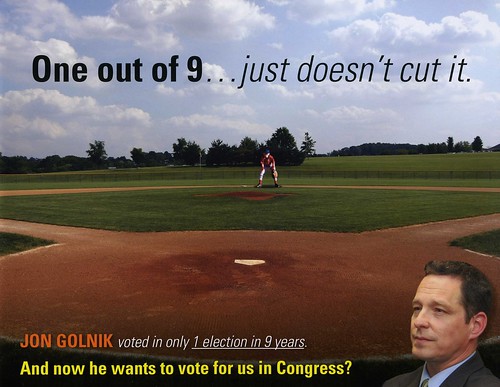 Today’s mail brought a flier from the Massachusetts Democratic Party attacking Republican Congressional candidate Jon Golnik for voting in only one election in nine years. The front of the piece (shown above) has a picture of a solitary player on an otherwise empty baseball diamond with the caption “One out of 9 . . . just doesn’t cut it.” followed by “Jon Golnik voted in only 1 election in 9 years. And now he wants to vote for us in Congress?”

The inside of the four-sided mailer (shown below in part) says “Jon Golnik didn’t bother to vote. But, now, he’s asking for our vote?” along with the following text:

When someone’s elected to Congress, they’re responsible for casting votes on our behalf. The last person you’d hire for that job is someone who doesn’t bother to vote. After moving here in 2001, Jon Golnik voted only once in 9 years. And now he’s asking us to let him vote for us in Congress.

If Jon Golnik knew our community better, he’d know how important Social Security is to us. But, Golnik supports privatization of Social Security, a scheme that would hand over our retirement savings to Wall Street traders whose risky practices wrecked our economy. 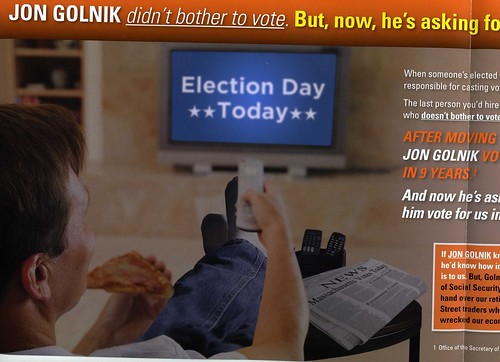 22 Responses to MassDems hit Golnik for not voting