The entry below is being cross posted from local Playwright Jack Neary’s own blog, Shards

A couple of months ago, I introduced you to Eddie and Timmy. I had just moved in with them and my brother and sister-in-law in Derry, NH, where I set up my man cave and began perpetrating whatever it is I do on society from there. Let me reacquaint you with the boys. 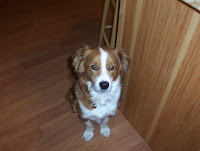 This is Eddie. Eddie is the shaggier of the brothers. A little lankier, a little longer than Timmy. If the two brothers walked into a doggie saloon, Eddie would be the one the girl doggies would slobber over. He’d lope up to the bar, casually order a Milk Bone (which he wouldn’t have to pay for), and fake chew on it as he eyed the doggettes up and down the bar to select which he would grace with his charm for the rest of the evening. 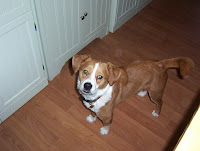 And this is Timmy. Timmy’s the stockier one, the fireplug. Timmy would be Eddie’s wing man as they ambled into the doggie saloon. Timmy would not be concerned that the doggettes were slobbering over his smoother-looking brother, because Timmy knows, 1. He’s the brains of the outfit and 2. Eddie’s hand-me-downs are gonna be just fine for his purposes

Eddie and Timmy, after about four months of allowing me to share their domicile, have adjusted to my presence. That is to say, they know my place in the household. I am the guy who tosses doggie treats at them all hours of the day and night. I am the guy who, when preparing his dinner in the kitchen, brings a little can of PikNik Original Shoestring Potatoes with him and who, as he stirs his soup or manages the franks in his George Foreman Grill, will sprinkle PikNik Original Shoestring Potatoes on the floor near the stove to keep Eddie and Timmy occupied while dinner is being prepared. I am the guy who, after he eats his breakfast in his man cave, will be very careless with the toast crumbs and the New Kellogg’s “Simply Cinnamon” Corn Flakes (free with rebate for a limited time), so that the carpet in the man cave is replete with bits and pieces of toast and flakes ready for the little doggie vacuums to consume.

There are advantages to being Uncle Crumbs. For one, it means the dogs like me. True, it’s kind of pathetic to be appreciated for your food scraps, but one takes what one can get in this life. Yes, I know that when Timmy scratches on my door mid-morning (Eddie never does the scratching. That’s the wing man’s job.), I know he’s not visiting to shoot the breeze or catch up on the latest reading of one of my plays, but rather it’s to see whether I’ve gone back to Lightly Sweetened Multi-Grain Cheerios, which he and Eddie find inferior to the new Cinnamon Corn Flakes. I mean, they will eat the discarded Cheerios, but, come on (they think), not only do the Flakes taste better, there’s the damn rebate! But it does mean they visit, which is a good thing. I fear that if I cleaned up my act and stopped spilling my breakfast on the floor, I’d never see them again. But that won’t happen. I’m something of a slob. They know it. They’ll always be back.