The entry below is being cross posted from local actor and playwright Jack Neary’s own blog, Shards.

About a year ago, I was called in by CP Casting to read for an upcoming film to be directed by, co-written by, and starring Ben Affleck. As I recall, I initially read for the role of a Charlestown gangster leader whose flower shop fronted for his operation. I read the scene and was called back another time to read it again. Eventually, I was called in to read for another part, Arnold Washton, one of the guys guarding the stash of concessions cash collected at Fenway Park after a four-game series with the Yankees. In other words, if I got the part, I would be guarding a lot of fake Hollywood dough. My first few auditions were for the CP folks, my last one–a callback for “Arnold,” was for Ben Affleck. I remember I walked into the audition room and stepped boldly to the table where Ben was sitting. I held out my hand, and it occurred to me that Ben was not expecting this. It also occurred to me that his not expecting this meant that he was going to consider me an asshole and not consider me for the part. I went through with the handshake, though, even though Ben’s ball point pen stayed clumsily in his hand as he shook mine. Never ambush a movie star who’s wielding a ballpoint pen. It’s just not done.

Anyway, I read the scene for Ben, and I thought the reading went less successfully than the reading I did for the CP people but…that’s the way it goes. As I walked out of the room, the woman who runs CP asked me if I would be available for a table read. A bunch of folks were going to sit around and read the script, see how it sounds. I said sure, of course, but that table read never came to pass for me. I was to read the part of the Charlestown gangster, a major supporting role, and, as it turned out, they didn’t need me. But it was fun to be asked.

Anyway, I do get the part of “Arnold,” and I do the shoot, which lasts two days and I think I covered all this in an earlier blog entry. Fast forward to last night, Tuesday, September 14, 2010, when the finished film is to be given its Boston premiere at Fenway Park, which is the location of the final heist of the film. I was amazed that they planned this. It’s outdoors, in mid-September, and it’s not a football game. It’s a movie. Could it be anything but cold, uncomfortable, and possibly even wet?

Turns out, none of the above. A beautiful late summer day turned into a gorgeous late summer evening. My friend Sandra and I got into town early (I am a huge traffic beater, whenever I can swing it), and planned to have dinner before the premiere. We parked in the main Fenway Lot (FREE PARKING PASS!!!!!! ANYBODY WHO’S BEEN TO FENWAY KNOWS WHAT THIS MEANS.) and I looked across the street to the Cask and Flagon. Now, again, anybody who has gone to a Red Sox game knows that you just don’t go to the Cask and Flagon before the game. Mainly because you can’t get in there. To paraphrase Yogi–“Nobody goes there. It’s too crowded.” But I could see that there was plenty of room inside, and even though the C&F ain’t the height of New England elegance, I thought we’d give it a shot, because I’d never get in there again. We found a table near the window which looked out on to Gate E, which happened to be the Gate those of us folks privileged to be invited to the premiere were supposed to use. We figured we could sit and watch the stars go by.

Well, we did sit and we did watch, but no stars went by. Unless you consider Jerry Kissel a star. I actually do. I think he’s one of the best actors in Boston. But when you’re looking for Jennifer Garner, Jerry Kissel just doesn’t cut it. Still, it was fun to anticipate things that never happened. Eventually, we left the Cask and Flagon and became just another couple of non-stars waiting to get into the park. Finally, Gate E opened and we stepped inside, only to be greeted by scanners and pat downs and all kinds of “keep the terrorists away from the movie people” security. No big deal, but I did have a lot of change (I never go to Boston without dozens of quarters), and it was embarrassing filling up the plate that was whisked through the scanner. Took me twenty minutes to get everything back in my pocket. But I did, and we followed the throng up the ramp to Section 26, which overlooks the third base line. 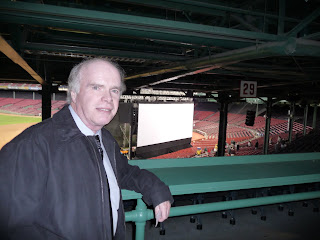 Walking into Fenway, no matter how many times you’ve done it, or how old you are, is a thrilling experience. It is just one, big, damn, beautiful place. (To look at, not to sit in, but that’s another story.) But rarely does one walk into an essentially empty Fenway, to see a mammoth motion picture screen mounted on scaffolding, and spanning the entire third base line.

There seemed to be a Red Carpet rolled along the stands next to the Red Sox dugout on the first base side, with a group of movie posters lined up with the carpet. The folks were pokily making their way to their seats, which were mostly in Section 26, handily tucked between two posts so that everybody could see the screen. Ultimately, people sat in Sections 25 and 27, but only where the posts wouldn’t interfere. Sandra and I took our seats in Row 6, #s 8 and 9. As we did, we were handed an official THE TOWN blanket, which Warner Bros. provided gratis, in case autumn stealthily intruded during the screening. The blanket was black, and had “The Town” sewn into it, in red. Things did not get under way according to the schedule, and there was a lot of sitting around and “Howayahs!” shared by the folks in the stands, many of whom, it seemed, knew each other. Now that everybody and his brother is making gangster movies in Boston, the need for gangster types among the local thespian crowd has grown precipitously. They were all having a hell of a time. Sandra became very deft at taking photos without looking into the lens.

Finally, at about 8:40, all the stars had arrived and taken their seats, and Fenway suddenly went black. That’s quite an experience if, as I am, you’re used to the place in stunning brightness. Then, just as suddenly, a spotlight hit Ben Affleck, who stood in front of the screen and graciously thanked the Boston film community for the good experience he had working in Charlestown and thereabouts shooting the movie. He didn’t introduce the stars with him (it was just too dark), but did let us know that Jeremy Renner, Blake Lively, Rebecca Hall, Chris Cooper and Jon Hamm were present, as was Ben’s friend Matt Damon. Alas, no Jennifer. (I’ve been a big fan since ALIAS.)

At the conclusion of his really terrific speech, the film began. At first, it seemed like it was simply going to be an evening of people recognizing themselves and their friends on screen and doing the WHOOP! thing, but, though that did happen occasionally during the evening, by and large the audience watched the film with interest. It is beautifully shot, and the sound and sight systems set up for Fenway were excellent. The story may have a hole or two, but the performances, the humor, and the incredible (I use that word intentionally) special effects and action sequences make it a damn good show. I think it will do very well, and unless five other actors do bang-up work in supporting roles between now and Oscar time, I think Renner gets a nomination. If the film is a huge hit, look for Affleck, too, to get a nod, as director.

When the film ended most eveybody hung around a bit to watch the credits, and those of us with small roles were very happy when our names did appear. I had done two days on the film, and had one line as I was tied up by Affleck as he robbed Fenway. My line did not survive the cut, but ten seconds of me looking frightened in medium close-up did, and for that, I’m grateful. And there was my name. Up there on the screen. For the first time.

All in all, a truly cool evening.

And, oh, by the way, that part I had initially read for and was called back for–went to the great character actor Pete Postlethwaite. Why they’d want to use him instead of me….

And my parking space was sooooo good….I got outa town in no time.