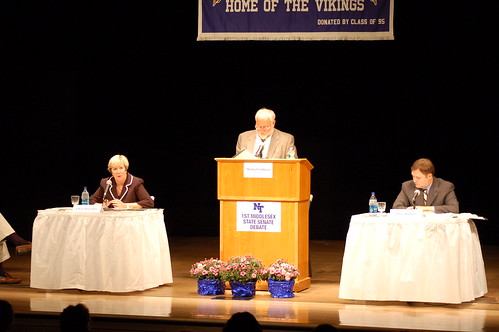 Tonight’s debate between Chris Doherty and Eileen Donoghue, the Democratic candidates for the First Middlesex State Senate seat was held at Nashoba Valley Technical High School in Westford. The candidates were seated at individual tables on the auditorium stage with moderator Michael Goldman’s large lectern separating them (and possibly even blocking their views of each other). About 100 people attended in person. Almost all were affiliated with one of the campaigns, with the school, or with the media. Elected officials I noticed (there could have been more) included Westford state representative Jim Arciero, Lowell City Councilor Patrick Murphy and Tyngsborough selectmen Elizabeth Coughlin and Ashley O’Neil.

The format used, aided by the skill of the moderator, made for good exchanges between the candidates. There were no panelists to ask questions; that was left entirely to Goldman. The format was a question to a candidate; 90 seconds to respond; a 60 second rebuttal from the other candidate; and a 30 second reply from the first. Goldman frequently exercised his discretion to modify that format, extending the time for answers, immediately asking multiple follow-up questions to the candidate answering, and giving each an equitable amount of time.

Whether it was intended or not, the layout of the stage and Goldman’s early queries on specific issues – yes or no responses required – seemed to diffuse some of the animosity that has flourished between these two candidates. While they were subsequently passionate and emphatic in their responses, visceral anger directed at the other was nowhere in evidence. Of course I could be wrong about that.