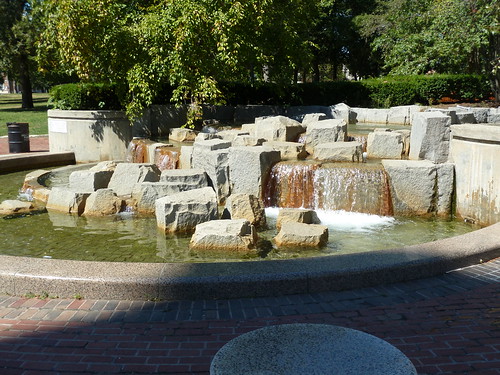 While in Lawrence today for the Bread & Roses Festival, I got my first look at the city’s Robert Frost Fountain, pictured above. This is what is written on the plaque alongside the fountain:

Robert Lee Frost, born Mach 26, 1874 was raised here in Lawrence. His first published poem appeared in the Lawrence “High School Bulletin”. He graduated as Valedictorian from Lawrence High School along with his future wife and co-valedictorian, Elinor Miriam White.

Robert Frost’s poetry received international acclaim being awarded the Pulitzer Prize for the best poetry of the year four times. He received Honorary Degrees from many universities including Harvard, Dartmouth and Yale. Robert Frost died January 29, 1963.

In the poem “Birches,” Frost wrote:

I’d like to go by climbing a birch tree,
And climb black branches up a snow-white trunk
Toward heaven, till the tree could bear no more, But dipped its top and set me down again.
That would be good both going and coming back.
One could do worse than be a swinger of birches.

The fountain in memory of Robert Lee Frost with its constructed brook, granite falls and native plants, represents the New England landscape which was o much a part of his poetry.