The entry below is being cross posted from Jack Neary’s own blog, “Shards”.

This is a Good News/Bad News thing. I saw a couple of movies this week, one in a theatre, one via Netflix Streaming. My expectations were knocked sideways with each film.

I really like Steve Carell (Wait, while I go to the Internet and check, once again, on the l’s and the r’s in his name.) Okay. Carell. I remember his earlier work on THE DAILY SHOW. And I remember how blown away I was with his performance in LITTLE MISS SUNSHINE. Who knew the guy had acting chops like that? And then there’s THE OFFICE. I am now watching a lot of OFFICE reruns. The show itself is brilliant. Brilliant in a different way from Gervais’ brilliant British version, but brilliant nonetheless. Brilliant in a decidedly American way. So the first time through these shows, it was the show–and the beautifully written and performed arc of the Jim/Pam relationship–that made the show work for me. Now, on my second time through, I’m recognizing how remarkably honest and funny Carell is in the show. Episode by episode he brings everything he’s got to the table, and that’s a lot. He is at once silly and ridiculous and pathetic and charming and…sad. Gervais does all this as well, it is true, but…Carell (and the OFFICE writers) need to be recognized for this wonderful character. Okay. All right. I love Steve Carell. I thought both he and Tina Fey were very good in DATE NIGHT, though I thought the writing let them down. Okay. All right. But the other day, in a theatre, I saw DINNER FOR SCHMUCKS.

Here’s how I think the pitch meeting for DINNER FOR SCHMUCKS went down. 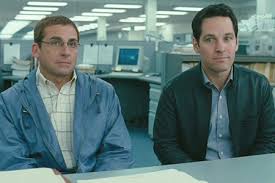 PITCHER: Are you ready? Guy wants a promotion. His boss says okay. But the guy has to bring an idiot to dinner so the boss and his cronies can make fun of the guy. DINNER FOR SCHMUCKS. Whatdya think?

PRODUCER: Are you sure this will…

And that’s where the creativity stopped. The movie is a long exercise in badly considered and executed “comic” situations and hideously unfunny jokes. I am terrible at remembering specifics about movies, so I am unable to regurgitate the jokes for you here but, trust me, the writers are sophomoric and talent-free when it comes to getting to the heart of the comic matter. And the very talented (I think) and very witty Zach Galifianakis is wasted in a stooge role that is offensively underwritten. It takes a lifetime to get to the dinner, and when we do, we are treated to more of the same lame humor and patented “guy movie” cliches we sat through to get to dinner. My question: Did Carell and Paul Rudd and Galifianakis actually read the script before committing to the movie? Or did they, like the producer, just sign on with the pitch? I’m guessing the latter. Because all of those actors are much, much, much better than the material in DINNER FOR SCHMUCKS.

And then there’s TRANSSIBERIAN.

(No matter how many times I type that title, the spell check always goes into Panic Mode, but as far as I can tell, that’s the way it’s spelled.) 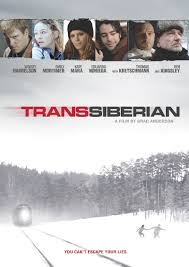 This is a thriller I don’t think anybody saw. Made in 2008 by writer/director Brad Anderson (THE MACHINIST, NEXT STOP WONDERLAND), it’s a story about an American couple (Woody Harrelson and Emily Mortimer–yeah, playing an American), who are taking the Transsiberian Express from Beijing to Moscow after doing some social work in China. Along the way, they encounter an “interesting” young couple who attracts them in varying ways, and the results are far from pleasant for Woody and Emily. The plot involves the Russian drug trade and the shady way in which the Russian police force goes about its business. Eduardo Noriega and Kate Mara play the mysterious strangers on the train, and Ben Kingsley plays a Russian detective. The Lithuanian shoot stands in for Siberia, and the film is beautifully rendered.

More than all this, though, is the fact that TRANSSIBERIAN is a terrific thriller, and terrific thrillers are hard to come by. Most of the time, the plot line in current thrillers is transparent almost from the first reel. This movie, like Polanski’s THE GHOST WRITER, is a current thriller that involves the viewer carefully, and then, about halfway through the movie, just grabs the viewer and takes him on an unexpected ride full of twists and turns that lasts until the very last frame.

TRANSSIBERIAN had the misfortune of opening the same weekend as THE DARK KNIGHT, the biggest opening in film history, and thus accounts for its relative obscurity.

But it’s still out there, available to see, and I recommend it without reservation.