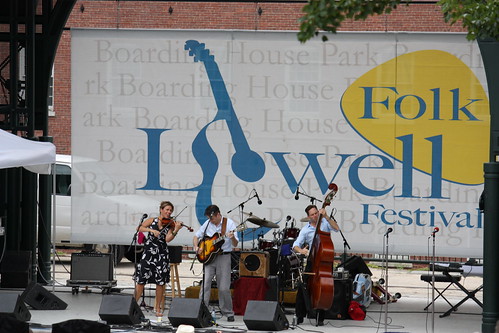 Some observations about this year’s Lowell Folk Festival from a casual observer (me) who can remember the first one many years ago:

The many performance sites – Boarding House Park, JFK Plaza, Lee Street Stage, St Anne’s, Market Street Stage and Dutton Street Dance Pavilion – make the festival more interesting for anyone who wants to wander around, catching targets of opportunity. This buffet of venues might also contribute to the “there were more people here last year” feel that one might have felt while at any one of those sites.

The “street performances” I saw at Merrimack and John Streets – the Yo Yo People on Saturday and UTEC Break Dancers on Sunday – were excellent. Both played to big, enthusiastic crowds that formed on what’s usually a busy intersection. More of these types of performances could contribute to the “street fair” atmosphere while not detracting from the main stages.

From John Street up to Dutton, Merrimack Street resembled an outdoor shopping mall with resident businesses of all types offering their wares on the sidewalk and street. This seemed to “balance the load” of pedestrian traffic between Shattuck (which was always packed in the past) and Palmer (which was more crowded than I ever remember it).

The non-local commercial businesses that set up on John Street and at the Dutton Street complex sold traditional carnival-style food and drink – lemonade, sausage, fried dough – and seemed to fit in quite well. I understand that the amounts they pay for the right to be present help cover the cost of the festival.

There were plenty of dogs visiting the festival, but I only saw one pit bull. While I firmly believe that every dog must be judged individually, at last year’s festival I saw an abundance of serious-looking dogs attached to serious-looking owners patrolling the paths on which most visitors were arriving. That wasn’t the case this year.

Seeing a live performance is a great experience but sometimes the crowd and the heat keep you from fully appreciating the talent on stage. When I arrived home late Sunday afternoon, the festival was already on the TV so I watched the last few acts from the comfort of my couch. Having the festival televised on local cable TV (thanks LTC, Lowell Educational TV, and Chelmsford Telemedia), is a terrific service to the citizens of Lowell. Too bad local cable TV is so compartmented: I’m sure local cable stations in the region would pick up the Lowell feed if it was easily available.

Politicians face a challenge from the Folk Festival: It’s good to be there and mingle with the thousands in attendance, but you can’t do anything overtly political. In the 8+ hours I was there between Saturday and Sunday, here’s what I saw: Former Mayor Bud Caulfield was omnipresent; state senate candidate Eileen Donoghue was working the crowd at JFK Plaza on Sunday; on Saturday, state auditor candidate Mike Lake had a contingent in front of City Hall. The Patrick-Murray campaign also had a big crew in lime green t-shirts, also in front of City Hall (that’s a designated “free speech” area). Republican auditor candidate Kamal Jain was spotted at the WCAP booth; Republican Congressional candidates Sam Meas was there with a crowd and candidate Jon Golnik was trailed by two supporters pulling a wagon filled with bottles of ice water. I’m sure many others were there: we just didn’t cross paths.

The people – in his post earlier in the weekend, Paul mentioned that the crowd he saw wasn’t the WGBH-type group that was so evident at earlier festivals. To me, this year’s crowd reminded me of what you’d find at a typical Lowell Spinners game, which to me is a good thing.

Although city traffic engineers might not welcome this, I’ve had several people suggest that Merrimack Street and perhaps other downtown roads should be closed off some Summer weekend nights to allow the type of outdoor street fair atmosphere to let loose on more than just the last weekend in July.

To those who made the Folk Festival possible – thank you. I can’t wait till next year.

One Response to Folk Festival – the day after