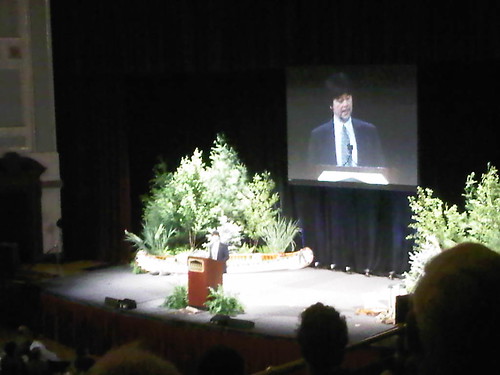 Congratulations to Middlesex Community College for tonight’s 12th MCC Celebrity Forum at the Lowell Memorial Auditorium. Ken Burns was simply outstanding. He entered from the rear of the hall, accompanied by a vintage recording of “This Land is Your Land” and quickly mounted the stage that was decorated by foliage, a canoe and a tent in recognition of his latest film, “Our National Parks: America’s Greatest Idea.” Functionally, Burns spoke from a solid wooden podium at center stage with his image projected on a large video screen to his rear.

Burns began by describing the central themes that run through all his films. Foremost is the exploration of the question “who are we?” closely followed by examinations of race and space, particularly how the sheer size of our country shaped us as a people. He spoke glowingly of our National Parks, calling them “the Declaration of Independence applied to the landscape.” Several times he returned to a point made in the 14 minute introduction to National Parks that was shown before he took the stage: That we fail to appreciate the fact that we all, as American citizens, own the most magnificent and beautiful natural spaces in our country. This was a radical notion. In the rest of the world, such spots were the sole domain of kings and nobles. Without the National Park system, Burns suggested, Yellowstone would be a gated community reserved for the wealthiest in our country.

Burns closed with a compelling personal story. His mother died of cancer when he was very young and his father was distant and stingy with his affection (which Burns readily identifies as a consequence of his mom’s illness). Once when Burns was only six years old, his dad took him on a drive and then a hike along Skyline Drive at the mouth of the Shenandoah Valley. The film maker said that this long forgotten memory, brought back to life while filming “National Parks”, reminded him that part of that story is an intensely personal one: it’s about who we see these places with and how we pass along our love of these parks to the next generation.

After his prepared remarks, Burns took questions for half an hour. When asked which film has had the biggest impact on him, he replied that since all the movies follow similar themes, whatever one he’s working on most recently would be the one, although he conceded that the amazing response to “Civil War” made that one stand out. How does he choose the subject for a film? He said “the topics choose me” and that he’s finished every project he’s began.

At one point, Burns observed that it’s often in the financial interest of many to keep us divided, so one of his goals is to identify things that bring us together. He said “nostalgia and sentimentality are the enemies of everything that’s good” but he criticized academic historians for rejecting the narrative form of history which in turn negatively influences the teaching of history. The biggest part of “history” after all is “story” and if you don’t tell a good story, no one’s going to pay much attention. He also said that too often we retreat to pure rationality, to a world where 1 plus 1 always equals 2. His objective is to take us to a higher plane, one where emotion and inspiration play a bigger role.

Audience member Paul Sheehy next asked Burns, the creator of a film called “Baseball”, to comment on any changes that should be made to baseball rules after a blown call by an umpire cost Detriot Tigers pitcher Armando Gallaraga a no hitter a few weeks ago. Burns said “the outcome was exactly right.” He said that two other pitchers have already thrown no hitters this year, but their names will soon be forgotten. Gallaraga, on the other hand, by his tremendous show of grace, class and fortitude, will forever be remembered. After all, said Burns, life is not about everything going right: it’s about loss and failure as well as success. Burns then explained that his next film, which he is doing the final editing of right now, is a sequel to “Baseball” and is called “The 10th Inning.” He said that New England fans will especially enjoy this one since the story that binds it together is the 2004 baseball season.

Ken Burns fielded a few more questions and then departed to a standing ovation after first receiving a Middlesex Community College sweatshirt from President Carole Cowan. Burns was an excellent speaker, thought provoking at so many levels. I walked out of the Auditorium determined to get onto Netflix and fill up the queue with all of his films.