How a Kid from the East Coast Became a Diamondbacks Fan

When I was a kid growing up in Kingston, New York, in the 1950s, I chose my favorite sports teams by consulting a world atlas.  My father didn’t have any strong allegiances—he cared more about golf than any team sport.  My friends were all rooting for the Yankees, Giants, and Knicks, headquartered just 90 miles down the newly- constructed New York State Thruway.  I was determined to be different, and loved maps and geography and reading The Sporting News, which I bought every week at O’Reilly’s stationery store uptown.

As my basketball team, I chose the Fort Wayne (Indiana) Pistons.   Fort Wayne sounded exotic to me; who had ever heard of the place, let alone root for its team, which actually made it to the 1955 NBA finals before losing the last game by one point?  What I didn’t know at the time was that the Fort Wayne players allegedly conspired with gamblers to shave points and throw various games during the 1953–54 and 1954–55 seasons, including that championship game. In hockey, I made a shrewder choice—the Montreal Canadiens.  Canada and Quebec seemed far away and very French. Their players had great names: Jean Beliveau, Maurice Richard (M-O-R-E-E-S   R-E-E-C-H-A-R-D, accent on the last syllable). The Canadiens were a solid, reliable team coming in first or second in the NHL throughout the 1950s.  No one ever accused them of cheating. 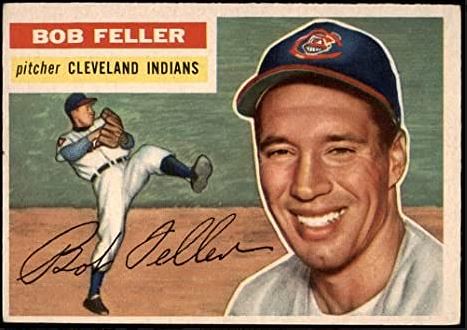 But baseball was my true love, and here my choice mattered the most.  The team I settled on was the Cleveland Indians; Cleveland was not the most thrilling place on the map but it was far away enough from my Hudson River town to count as exotic.  And the team was good—very good.  In 1954, when I was nine and in the fourth grade, the Indians won the American League Pennant with an eye-popping 111-43 record.  They had starting pitchers who were truly great–Bob Lemon, Early Wynn, Bob Feller and Mike Garcia, all 20-game winners.  Feller, who Ted Williams called “the fastest and best pitcher I ever faced” was a particular hero of mine.  I read a kids’ biography of him and years later visited the Bob Feller Museum in the pitcher’s hometown of Van Meter, Iowa (pop. 1,484), where I stared star-struck at a teenage Feller’s original contract with the Cleveland organization—a $500 signing bonus.   In 1955, Herb Score came along, a 23 year old left-hander, a strikeout whiz like Feller, and who was rookie of the year that year.  An additional Indians’ attraction was Al Rosen at third base, who was Jewish, like me.  Rosen batted .300 in that fabled 1954 season, with 24 home runs.  All in all, it was a dazzling team, who I was sure could give the Yankees a run for their money for years.  I was proud of my baseball acumen.

Still, I might have realized something was amiss when the 111-43 Indians lost the 1954 World Series to the New York Giants four games to zero.  The team was highly competitive in 1955 when it came in in second place in the AL, three games behind the Yankees.  In 1956, it was still strong, again finishing second.  Herb Score won 20 games that year and led the league in strikeouts.  Then, disaster struck.  In April, 1957, Score was hit in the face by a line drive, effectively ending his career.  That same year, the Indians finished in sixth place, 21 games behind the Yankees.

You could date the decline of the Indians from Score’s injury.  Or, as author Terry Pluto did, to the Indians’ decision three years later to trade their best hitter, Rocky Colavito,.  Pluto wrote a book which I read avidly many years later called The Curse of Rocky Colavito: A Loving look at a Thirty-Year Slump, whose title pretty much described the many losing seasons that followed.  As Pluto noted, “The franchise has been the worst funded, the worst managed… the worst of the worst.”  A few samples: in 1971, the Indians lost 102 games; in 1973, 91 games; in 1977, 90 games, in 1985, 102 games once again.  The seasons in between weren’t much better.

I kept my loyalty to the Tribe during this period, but it was hard to stay focused on a team with a such a lousy record and so few players to get excited about.  I began gradually to drift towards the Red Sox. After all, what was the reason to root for the hapless Indians while living in Boston? And I wasn’t sure I wanted to walk around town in a baseball cap emblazoned with an image of caricatured Chief Wahoo.  By the time the Indians finally got back into contention in the 2000s, I had cast my lot, albeit half-heartedly, with the Sox.

Still, the lure of the faraway—and that lingering childhood desire to be different than everyone else—persisted.  While I still counted the Red Sox number 1, I turned to the Arizona Diamondbacks as my number 2 team.  Arizona had always intrigued me.  As a kid, my great aunt who lived there sent me a subscription to Arizona Highways magazine, with its famous photography of the Southwest.  In more recent years, I’d spent some time with my husband vacationing and working on some writing projects in Tucson, where I fell in love with the desert, the landscape out of those Westerns of my childhood, the endless skies, the star-filled clear nights.   Tucson also happened to be the place where the Indians used to spend their spring training when I first started to root for them.  Admittedly, the D’backs were based in Phoenix, the city two hours to the north that is Tucson’s rival.  Although the D’backs moved their spring training site out of Tucson to the tony Phoenix suburb of Scottsdale 10 years ago, taking the Colorado Rockies with them, I tried not to hold that against them.  Many people in Tucson did, however.

I started watching the D’backs games livestreamed on MLB TV network. Rooting for the D’backs offered a chance to see some truly exciting teams, who played in the NL West—the Dodgers, Giants, the Padres, the always dangerous Colorado Rockies.   I even got to see Mookie Betts. I appreciated the NL rules—the pitcher forced to bat, the bunts, the stolen bases.  It was fun.  And, in the sharp focus of MLB TV, it offered a kind of mini-tour of Western ball parks—Denver’s Coors Field with its clear mountain air and stunning sunsets; San Francisco’s Oracle Park, where home runs seemed to soar into San Francisco Bay; Petco Park in San Diego that looked very cool even with cardboard cutouts of fans during the pandemic.  Chase Field, where the D’backs played, was nondescript but its signs advertising iconic Arizona brands—Fry’s supermarkets, Banner Health—made me feel I was still on vacation.  The D’backs had a lot of potential—they made the playoffs in 2018.  Then, there were the other NL teams the D’backs sometimes got to play against that I was unfamiliar with but were awfully good—the Milwaukee Brewers, the St. Louis Cardinals, the Cincinnati Reds, the Chicago Cubs.  I was hooked, and the Red Sox were blacked out on MLB TV anyway.  The Diamondbacks were now my number one team.

By 2021, after a year shortened by the pandemic, I was ready for the Diamondbacks season.  It was true that the D’backs were underdogs in a division with some very strong teams, true that almost any team was overmatched by the Dodgers, true that the Padres had paid a king’s ransom to field a contending ball club.  Still, the commentators said the D’backs had a fighting chance to compete at least for the wild card.  The club had players with slightly off-beat and appealing resumes:  Nick Ahmed, the environmentally-minded Golden Glove shortstop who started out on the baseball diamonds of East Longmeadow, Massachusetts; Luke Weaver, the sometimes brilliant right handed pitcher who wrote eloquent articles for an online Christian magazine; first baseman Christian Walker, who looked the part of a slugger and who meditated to an online app every game. I was hopeful.

Then, with the season barely underway I began to feel I was back in Cleveland in 1957.  Three of Arizona’s four starting pitchers—Madison “Mad Bum” Bumgarner, Zach Gallen, and Luke Weaver—were injured and were out past the All-Star game.  Merrill Kelly, their only remaining starter (until he would be out for month with Covid later in the season), would win almost every game he pitched but the team would lose all the other ones. The late-inning relievers were a disaster.  Their two major sluggers—Ketel Marte and Kole Calhoun—were also injured and out for prolonged stretches.  Christian Walker never got his bat going until the last week of the season.  The result was mind-numbing—the D’backs lost 24 consecutive games on the road, a Major League record, and 34 out of 37 total.  Defeat possessed its own inexorable rhythm.  By the end of the season, even with their starting pitchers returning, the Diamondbacks finished 55 games behind- division-leading Giants and almost as many games behind the second-place Dodgers.   You couldn’t just blame injuries; it was also sloppy fielding, it was a failure to get clutch hits, it was the curse of Paul Goldschmidt (traded at the end of the 2018 season by the D’backs to the Cardinals)…who could say?

Yet watching the Diamondbacks lose 110 games in one season was oddly compelling.  How could a ball club with so many fine players and a very astute manager perform so poorly?  It had to end, didn’t it?—even the Indians of my boyhood years hadn’t been quite that bad.  Yet there were consolations.  As the season waned, and the losses piled up, the D’backs brought up a host of prospects from the minors, some to replace injured players, others for a just a look. There was Tyler Gilbert, a 27 year old pitcher who, after knocking around the minor leagues for years, pitched a no-hitter against the Padres in his first major league appearance. There was Seth Beer, called up from D’backs triple-A Reno affiliate, who hit a home run in his first major league at bat.  (In one of those classic baseball stories, Beer was fly-fishing, waist-deep in Nevada’s Truckee River, when he got the call up to come to the majors; he slipped and found himself underwater, but he managed to retrieve his cell phone at the last moment).  There was Jake McCarthy, who looked like a long-haired rock musician and whose ability to run the bases was electrifying.  There was Daulton Varsho, another young player, who could play almost every position, including catcher, and was the team’s hottest hitter after the All-Star break; his catch of an outfield fly ball in a late-September game against the Giants provided one of the most exciting plays of the D’backs entire season.

But 2021 remained hopeless for the Diamondbacks.  Gilbert never pitched another game even close to that no-hitter; Beer was injured and out for the rest of the season a week after his dramatic home run.  I kept on watching, even as fans deserted Chase Field in droves.  Perhaps I’d built up some reserves of patience rooting for the Indians when they fell victim to the curse of Rocky Colavito or for the Red Sox in the years before the team finally eluded the curse of the Bambino.

In the very last game of the 2021 season, Josh VanMeter, a fresh-faced, Indiana-born young infielder/outfielder obtained from Cincinnati the year before, hit a walk-off home run in the ninth inning to give the D’backs a 5-4 victory over the Colorado Rockies.  It was a thrilling end to what VanMeter conceded had been an “abysmal” season. But you could see the future of the Diamondbacks in players like VanMeter, and the future looked bright indeed.  Josh VanMeter of Ossian, Indiana, and my childhood hero the great Bob Feller of Van Meter, Iowa.  Were there echoes of something glorious here? Or were the baseball gods just toying with us again?  Still, there was hope; in baseball, there is always hope.