Whether a reader concurs with Chaucer’s view of Aprille as inspirational or agrees with Eliot’s claim that it “is the cruelest month,” April is National Poetry Month in the USA and April 29, 2021, is National Poetry Day in Ireland. This week we introduce four poems by Kerry Hardie, from her latest collection, Where Now Begins. Kerry generously allowed us to use lines from this collection on our January 8th post, in the week of the attack on the United States Capitol, when we paused our usual program. We are very pleased to share the following poems, together with audio recordings by the poet, that speak eloquently of things and people observed, of the natural world, “a miracle of landscape”, “the almonds of light”, and the supernatural where, “the old saints are lepping the Samain fires, / the new saints are lepping from life.”

Only a girl in a yellow dress,

Behind her, a miracle of landscape—

a grid of grey walls, a strip of dark sea,

and, away in the distance, the smoke mountains, dreaming.

It’s one of those lark days, a small wind is stirring,

the sky’s clean and infinite,

The girl is intent on the stones,

on her graceful precarious progress,

sees only which foothold will take her next step,

the wall being long and uneven,

and knows if she looks up, she’ll fall

and she’ll be left lying here, sodden with being,

and all that fierce purpose

I am sitting in the hollow of a dune

watching a squat man stand in a glitter of water.

I think he is not a swimmer yet he wants to be there,

breaking the almonds of light, as the low wave lips and turns over.

Figures move over the strand, passing the small, fat man,

who has walked far out on these long, smooth sands,

then spread a blue towel and undressed.

It is hot and blue, he wants to be deep in the water,

he wades out and stands, his ankles lost in the wash,

of the water, running in over his feet, the joy,

as pleased and as lulled as a child who yearns

for the mystery of the water. This swimming

is a strange activity, as strange as fish and full of longing,

a man who stands alone in a brilliant sea.

The Stone at the Heart of a Pear

‘Hark, hark, the dogs do bark, the beggars are leaving the town.

Some in rags and some in jags and one in a velvet gown.’

It was only that she was happy when she was with him.

But when he left, his velvet gown swirled in the dust,

and the strung tins that fettered one ankle bounced,

they rattled and sang on the stones and he didn’t look back.

So she went home.

After a while she took the yellow pears out of a basket,

wiped them and placed them on the stone sill

of the window that faced to the south where the sun lay longest.

Nothing had happened. Nothing ever happens

when everything is happening. But something always does

when bells and rags and dogs

romp in the summer dust.

and the old saints burn for the new young saints

flaring red in the west.

The old saints roar for the new young saints

and the moon’s on her back in the sky.

The old saints and the new young saints

have danced on the blade of the knife—

the old saints are lepping the Samain fires,

the new saints are lepping from life. 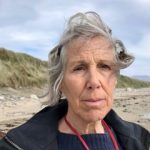 Where Now Begins, Bloodaxe Books, is Kerry Hardie’s eighth collection. Her seventh, The Zebra Stood in The Night, was shortlisted for the Irish Times Award. She has also written two novels, a radio play (RTE), and has just completed another novel. Her work has been widely translated and anthologized. Where Now Begins can be ordered in the US from these independent bookstores: https://www.indiebound.org/book/9781780375106