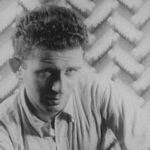 A while back, in one of my classes, I mentioned Norman Mailer. Several students chorused:  “Who’s Norman Mailer?”  Which surprised me. This is a class at the state university. I thought for a moment, and said, “He’s a thinking man’s Bukowski.” This got nods. Like a lot of their generation, the students know Bukowski.  But not Mailer.

And yet, in a real sense, Mailer made Bukowski possible; or at least paved the way for Bukowski to write whatever he pleased, and Bukowski pleased plenty.  But free, uncensored literary expression was not always an option for writers.

In the late 1940s, when Mailer was finishing his first novel, the epic naturalistic saga of World War Two, The Naked and the Dead, his editors were emphatic in forbidding him to drop the F bomb in its pages. Mailer argued that he was writing “about soldiers and combat and war and that the real obscenity isn’t language it’s . . .” and so on. But that fell on deaf ears: so, he coined the word “fug” to fill the gaps, and the guardians of decency allowed it to pass.

Mailer tells of having decided at the end of his 16th year, during his first semester at Harvard, that he wanted to make the Big Time, to become, in his words, “a major writer.”

And indeed, this became the overarching ambition (some would say the extravagant megalomania) that was the driving wheel of a career that spanned six decades.

Beginning with short stories at college, then on to The Naked and the Dead, Barbary Shore and The Deer Park, Mailer became the keeper of an ever-expanding vision. He was a man on a quest, which, as he declared in his 1959 book Advertisements for Myself, had become nothing less than seeking to foment “a revolution in the consciousness” of his times.

Mailer found himself toiling in the same monochromatic world of 1950s America that Jack Kerouac lived in. However, whereas Kerouac’s path took him on the road, Mailer, a precocious son of the Jersey Shore and Brooklyn, chose more or less to stay put in the belly of the beast, home to Madison Ave and the corporate mass media, and duke it out there.

Of Kerouac, whom he met and liked, Mailer wrote: “His literary energy is enormous, and he had enough of a wild eye to go along with his instincts and become the first figure of a new generation. His love of language had an ecstatic flux. To judge his worth, it is better to forget about him as a novelist and instead see him as an action painter or a bard.”

A pretty astute comment, still. I love Kerouac and regard him as a great artist, but frankly I’ve never considered him much of a fictionist per se, nor, for that matter, Mailer, either.

Mailer did go on to grab some brass rings—the National Book Award, the Pulitzer Prize twice—and tells a humorous story of having mistakenly thought he was tapped for the Nobel one year (instead it was French writer Andre Malraux, who was being considered, though didn’t win). However, it wasn’t Mailer’s novels which won the awards. The books were The Armies of the Night his engrossing account of a 1967 anti-war march on the Pentagon, and, later, The Executioner’s Song, a tale of convicted murderer Gary Gilmore. Despite what one chooses to call these efforts, they were (like Kerouac’s books) essentially non-fiction narratives into which Mailer had injected his iconic persona, thereby helping create what came to be called the “New Journalism.”

But I’m not going to quibble about labels; at his best, Norman Mailer was a brilliant and original wordsmith, and even when he was not at his best and just earning a paycheck to help deal with the spiraling alimony costs of the serial wedding groom—(he was married 6 times and had 9 children) he wrote riveting, breath-catching, thought-provoking prose.

His list of works is long: The White Negro; An American Dream; Miami and the Siege of Chicago; Of a Fire on the Moon; A Prisoner of Sex; Why Are We in Vietnam?. As well as psycho-biographies of figures as diverse as Marilyn Monroe, Picasso, Lee Harvey Oswald—even Jesus. And big, late career books like Ancient Evenings and Harlot’s Ghost and Castle in the Forest, (in which he returned to something more closely resembling fiction, though, in my view, not effectively). Generally, he managed, by turns, to engage and enrage and stir the pot.

Every bit as controversial as Mailer on the page was Mailer on the public stage, where he met expectations: pugnacious, challenging, funny, larger than life (though physically diminutive), and frequently brilliant in his talk. Even when his ideas strayed far beyond plausibility—his 1970’s proclamation, for instance, that good orgasms make good babies—he was nonetheless interesting.

Any writer needs a window from which to look upon the world, be it small (as is the case, necessarily, of most writers working today) or large (as was true of 19th Century giants like Tolstoy, Dickens, Melville). Of his mid-20th century contemporaries, Mailer came closest to this latter category. He wrote of a life lived on a broad scale. So, Norman Mailer, 1923–2007—Rest in Peace. We shan’t see your like again anytime soon.

Back to Bukowski for a moment, and my students’ comment. I like Bukowski, too.  He’s a true original; love him or hate him, when he was on his game, he can get you to feel something, to react.

Mailer, when he was good, he got you to feel and to think. And for a writer, that’s the Big Time, baby.