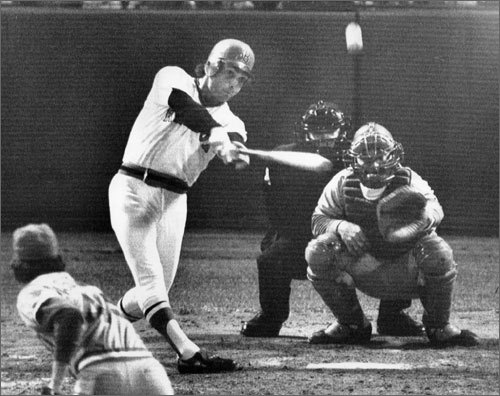 When I saw some “Why can’t we get guys like that?” comments on my Twitter feed when I awoke yesterday morning, I assumed it was Pats’ fans talking about Tom Brady. But no, it was baseball fans tweeting about former Lowell Spinner Mookie Betts who had led his Los Angeles Dodgers to a World Series championship by defeating the Tampa Bay Rays, four games to two.

I had not watched the game nor followed the series, but whenever I hear “World Series” I always think back to Tuesday, October 21, 1975, and Game 6 of that year’s World Series – which was the finest baseball game I’ve ever seen. I watched from the family room couch with my dad in the adjacent easy chair. Although most recall Carlton Fisk’s game-winning home run in the bottom of the 12th inning, my fondest memory came 45 minutes earlier with Bernie Carbo’s game-tying 3-run homer in the bottom of the 8th. My dad and I both exploded from our chairs and leaped towards the ceiling, our shared joy of the moment forming one of those memories that last a lifetime.

As the leaves fall and Halloween draws near, I’m not the only one who thinks back to the 1975 World Series. Regular contributor Michael McCormick recently shared this excellent essay about his memories of that series. While I always remember the twin homers by Carbo and Fisk, I’d forgotten all the other drama and athletic excellence that was featured in that Series. Mike’s detail-rich story has brought that all back for me and is a reminder of why baseball has such a special place in our culture.

The morning after the Red Sox eliminated the Oakland A’s in the American League Championship Series, I cut my classes at the University of Massachusetts in Amherst (UMass/ Amherst) to hitchhike a hundred miles to Fenway Park.  Boston had earned the right to face a great Cincinnati Red team (stacked with four future Hall-of Famers) in the 1975 World Series.  I wanted tickets for every home game.

Eighteen fans were already queued up for tickets by the time I arrived behind the Park’s left field wall, the Green Monster. I had a few books and peanut butter sandwiches to last me through the night. Twenty-five hundred standing room tickets, maximum of four tickets to a patron, were scheduled to go on sale at 9 am the next morning for $6.50 each.

Friends from Haverhill, Jack and Neil, and Brighton friends Eddie and Bobbie arrived a few hours later. We sat directly on the sidewalk where we passed the night talking baseball, trying to read, munching, and dozing occasionally.

When the sky lightened beyond the Prudential Building east of Fenway, we sprang to our feet. The orderly single line collapsed into a loose mingling of people two or three abreast. Newspapers later estimated that up to seven thousand people waited for tickets.

I was admiring dawn’s rosy light behind Boston’s skyline when a fist to my face sent me reeling towards the wall. My glasses flew off. Somehow I caught my balance. As I steadied myself, I saw Jack and Neil tackle the guy who had hit me into the gutter. Jack pounced on his chest screaming.

A stranger rushed towards the assailant. After pleading with Jack not to hit him, he grabbed the guy by the shirt, pulled him to his feet, spun him around, and escorted him up the street.

I never had any idea why the guy punched me.

Ten minutes after box office opened I arrived at a ticket window to buy one ticket for each of the four scheduled home games. Once I completed my purchase, I stepped away to the left.  To my surprise, I found myself standing beside another kiosk. Nobody was buying a ticket there.  Impulsively, I sidled up to the window and asked for four tickets. I handed over all the cash and coins in my pocket to the clerk. Luckily, my funds covered the purchase.

I slunk away quickly before the police or some disgruntled fan could apprehend me for my sneaky purchase. Two of my friends behind saw what I had done.  After making their initial purchases, Eddie and Neil stepped up to a second window and scored more tickets.

I gave two of my extra tickets to neighborhood friends Alex and Al.

I’ll never forget the thrill of watching the first game of a World Series with Eddie, my best friend in college, and my four best friends from Haverhill. We all met near the main Red Sox ticket office two hours before game time in order to secure standing room seats along the railing at the back of the reserved grandstands between home plate and third base. Luis Tiant pitched a complete game shut out and singled to trigger a six – run seventh inning to break open the scoreless game.

To this day Al considers the ticket one of his finest surprise gifts of a lifetime. And the Red Sox victory left Alex as charged up as I ever saw him. When we retreated to the Winner’s Circle, a sports bar in Newburyport, Alex couldn’t stop raving about how great it was to see “El Tiante” shut down Pete Rose, Johnnie Bench, Tony Perez and the rest of the ballyhooed “Big Red Machine.”

The Reds edged out the Sox in the ninth inning to win the second game 3-2. The Series then moved to Cincinnati for three games. The Sox salvaged one of three contests, 5-4, on a gutsy, 163 pitch complete game Luis Tiant win.

When the sixth game was rescheduled three times due to rain until October 21, Alex contacted me. He couldn’t attend that night because he’d promised to pick up his girlfriend at the airport.

We were astonished. We hadn’t even known Alex was seeing anyone! It turned out he was courting a Haverhill High classmate of ours who would marry the following year.  When I told Alex’s son about this forty years after his decision, he instantly remarked that his dad’s actions were just like Robin Williams’ in the movie “Good Will Hunting.”

As any serious Red Sox fan knows, the 6th game (viewed by over seventy million television fans) was one of the greatest contests of all-time. I still recall the cheers and chants of “Luis- Luis-Luis” that Red Sox fans showered Luis Tiant when he strode onto the field. We hoped that he could spin his magic again for a win that would even the Series at three victories apiece.

Perhaps because he hadn’t totally recovered from all the pitches he’d thrown in Game 4, the affable ace didn’t have his best stuff. When he was lifted for a relief pitcher after giving up an 8th inning homer that gave the Reds a 6-3 lead, I anticipated a somber two hour car ride back to Amherst.

I need not have worried.  In the bottom of the 8th inning, with two outs and two runners on base, Bernie Carbo batted as a pinch hitter. With two strikes and two balls on him, he launched a fly ball towards the deepest part of the Park. I watched the Reds centerfielder Ken Griffey run back and look up as if he were getting set for the catch. I saw the fans in centerfield rise, saw Griffey stop running, and heard a deafening roar. Home run!

The score was tied! My friends and I leaped and pounded each other with our baseball hats and fists in ecstasy. Years later, Carbo confessed he was high on mescaline when he connected.

We roared again in the 9th when the Sox loaded the bases with nobody out. But our enthusiasm crashed when second baseman Denny Doyle was tagged out at the plate trying to score on a fly ball out to left field. The Reds survived the threat and we settled in for extra innings.

In the eleventh, second baseman Joe Morgan stepped to the plate with one out and speedy center fielder Ken Griffey on first. Morgan tattooed a drive to deep right field. I saw Red Sox right fielder Dwight Evans racing back on a dead heat. I  saw him leap with an upturned arm towards the bullpen wall.  I couldn’t see the ball anymore, but the stadium exploded. Evans had improbably caught the drive. He whirled and fired the ball to the infield. The ball reached Red Sox shortstop Rick Burleson at first before Griffey could return to the base. Double play- the Sox were out of the inning!  Evans later explained later that he’d lost sight of the ball and reached his glove up in desperation to make the catch.

Two innings later with the score still tied, a few minutes after midnight as a full moon rose, Carlton Fisk pulled a pitch hard to left field. I lost sight of the ball’s  trajectory since my view was obstructed by the grandstand roof. I saw the ball bounce back onto the field and saw Fisk leap along the first base line. The explosion of happiness all over the Park told me all I needed to know.

Organist John Kiley pumped out Handel’s “ Hallelujuh Chrous. “ Thirty-five thousand plus fans wallowed in joy and hope, cheering and cheering. We stood at our seats screaming and screaming, willing the feeling to last forever.

Long into the wee hours of morning, the streets around the Park and Kenmore Square reverberated with celebration. I felt the thrill of being the part of something special, of being a witness to history, of being connected to something larger than myself. That night I lay in my bed reliving the game and dreaming of the pleasure I’d feel if the Red Sox took the Series.

As the baseball gods would have it, a championship was not to be. The Red Sox squandered a three run lead. Joe Morgan singled with two outs in the 9th inning to give the Reds a 4-3 victory and the championship.

For the next twenty-nine years, through three excruciating seven game post season losses and other seasons of dashed hope, Red Sox fans held game 6th as a talisman for how magical Red Sox baseball could be.  It represented the pinnacle of many Red Sox fans’ lives until the team’s 2004 breakthrough.

Truly, there is a sacred place in every Red Sox fans’ heart for the 2004 World Championship. And certainly each of the four 21st century championship brings deep and lasting pleasure. But yet, the ’75 Series’ sixth game continues to trigger joyful tears for those of us who remember.

One Response to The 1975 World Series remembered