In the medieval village of Tulsk, in County Roscommon is the Rathcroghan Visitor Center. The Center is located in the heart of a rich archeological landscape. This week we feature an essay by archeologist Daniel Curley who explains its connection to Halloween. 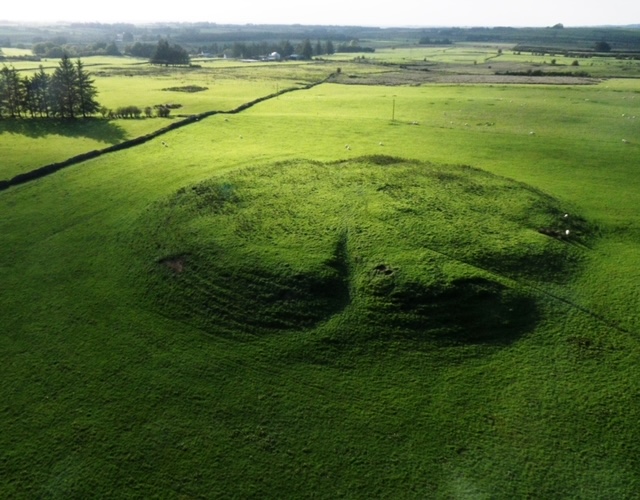 “Rathcroghan, the Irish Otherworld & the Home of Halloween”

The Rathcroghan archaeological landscape, Co. Roscommon, Ireland is a collection of 240 identified archaeological sites contained within a 6.5km (725ha) area in mid-Roscommon. Located on an elevated plateau of Carboniferous Limestone, this vast and impressive collection of archaeological monuments represents the remains of continuous human settlement on this fertile plain for the best part of 5,200 years, from the first farmers of the early Neolithic period (c.3200BC) through the 17th century. This is both the prehistoric and early historic royal site for Connacht, the western cóiced (fifth) or province of early medieval Ireland.

This fascinating landscape is replete with numerous prehistoric burial mounds, standing stones, massive linear earthworks, early medieval ringforts and enclosures and more, all crowned on the high-point of a glacial hill by a complex, multi-period ritual monument known as Rathcroghan Mound.

Our historic record of Rathcroghan tells us that this site was a focal point in the region for millennia as a political and symbolic place of importance; a place to bury the now forgotten prehistoric kings and queens of Connacht; and a place of celebration and feasting in the form of the óenach, the seasonal communal gathering or assembly. Connected with this, Ireland’s unrivalled early medieval literary collection, including the intoxicating mythology that we are proud to be able to read even today, places Rathcroghan as a pre-eminent location of residence and mustering for the legendary kings and queens, gods and monsters who toiled and warred, lived and died, in Ireland’s mythological realms. These names are known to us still, particularly the characters from the Ulster Cycle of Tales such as the Warrior Queen Medb of Cruachan, her husband Ailill, Cú Chulainn, Fráoch, Ferdia, the Mórrígan, Conor Mac Nessa, and more. 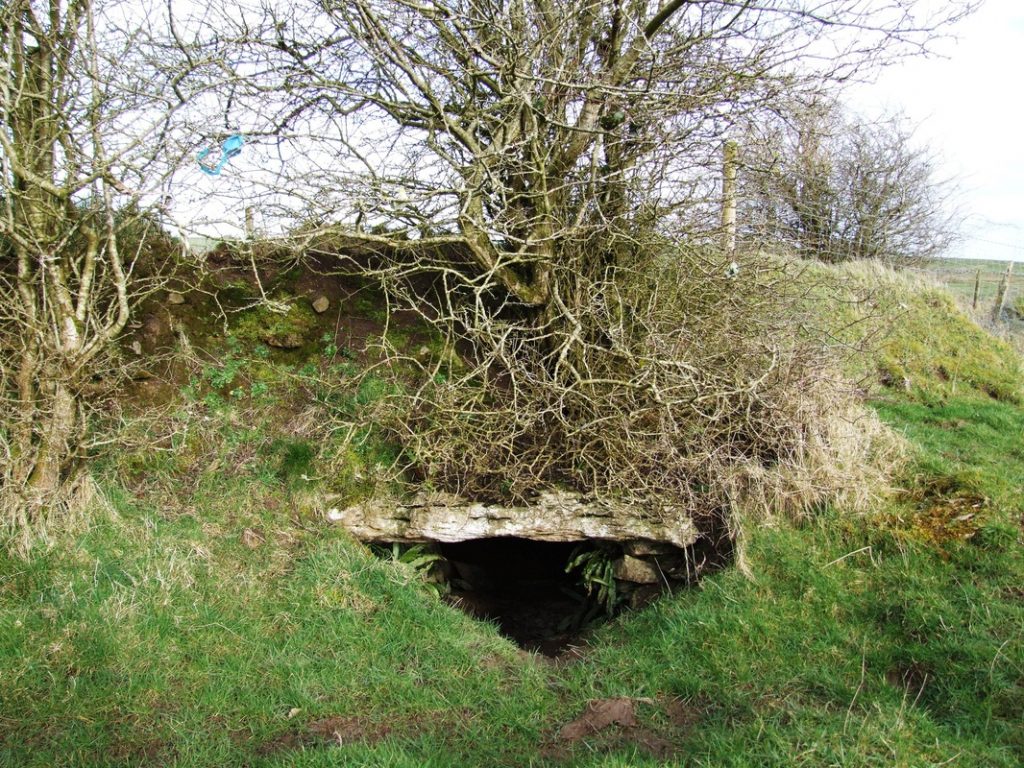 Joining these two pieces–the assembly or óenach activity with the corpus of Irish mythology–enables us to grasp the significance of one of the most enigmatic monuments in the Rathcroghan landscape, the cave of Oweynagat. Known in Irish as Uaimh na gCat (the cave of the cats), Uaimh Cruachain or Síd Cruachain, this cave is of considerable interest for a number of reasons.  First, it is composed of two elements, a natural limestone cavern, complete with small stalactites and other calcite deposits, which makes Oweynagat intriguing from a geological perspective.  Second, it has a formal entrance, constructed to permit access to this natural cavern, in the form of a souterrain, a passage that can be dated to the early medieval period (6th century – 12th century AD). This entrance passage houses two ogham inscriptions, rarely found on any monument in Co. Roscommon or, indeed, anywhere in the west of Ireland.  The legible example of the inscription actually records the names of Medb and the Connacht warrior Fráoch, which are the earliest recorded mentions of these two legendary figures in any literature.  Already, a picture is beginning to emerge for this site!

Christian scribes writing in the twelfth century felt the need to refer to Oweynagat as dorus iffiirn na Hérend (Ireland’s Gate to Hell). In reality, however, our ancestors believed that this cave was actually an entrance or portal to another realm, more correctly referred to as the Irish Otherworld. In the Irish mind-set, the Otherworld is neither a Hell nor a Paradise in the sense that we now consider it. Rather it is a land of eternal youth and bounty, and a place accessible, with difficulty, to the living. For those familiar with the Irish concept of Tír Na nÓg (the land of youth) in the Fenian Cycle of Tales, Tír Na nÓg and the Otherworld are one and the same. This realm was accessible by a number of means: travelling into the unknown over the seas, going beneath specific lakes (such as the now turlough of Loughnaneane – Enloch– in nearby Roscommon town); entering ancestral burial mounds (such as at Brú na Boinne – Newgrange, Co. Meath); and by entering the bowels of the earth itself. 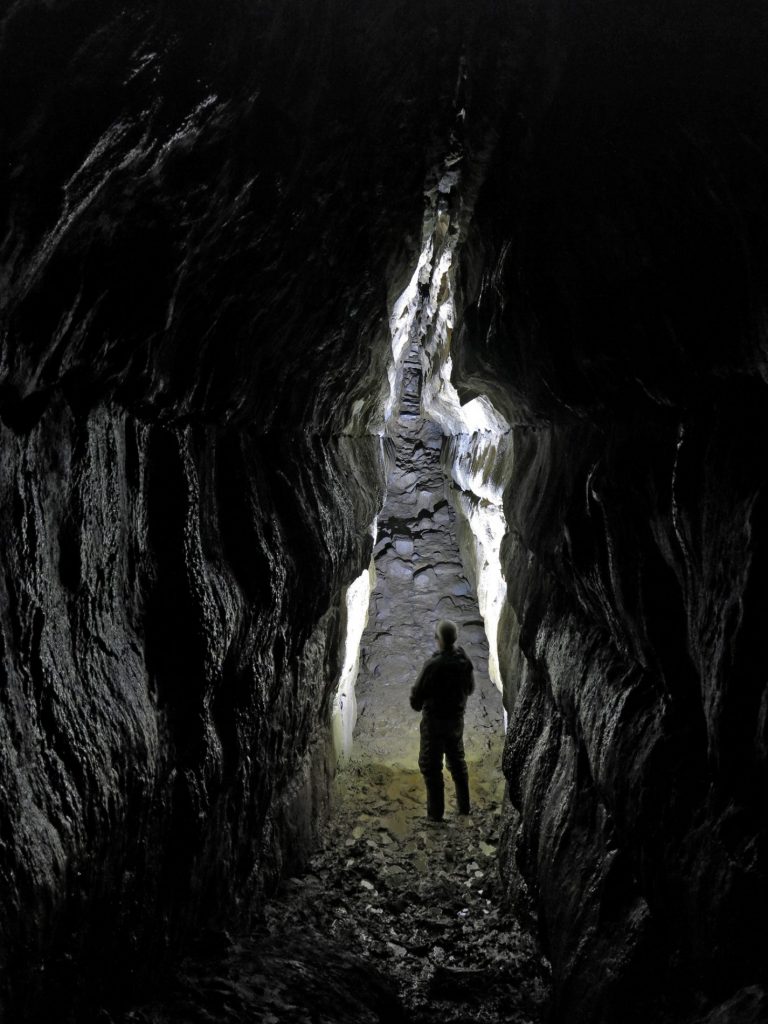 Access to the Otherworld via Oweynagat was a journey that a person could undertake only at one point in the calendar year, at the liminal time between the changing of the seasons from autumn to winter. Known today as the festival of Halloween, originally this Irish seasonal gathering was known as Samhain. The festival of Samhain marked the end of the harvest season, when people brought their livestock back from summer pastures, and slaughtered any animals they couldn’t keep through the winter. Therefore, Samhain was a celebration of the end of the harvest season, and the welcoming in of the winter season. The event involved rituals surrounding the cleansing of animals and rites to protect  the home, followed by gluttonous feasting on the recently harvested meat resources, with entertainment, trade, games, and horse racing. It also marked the arrangement of marriage contracts, the burial of important dead, and other communal activities. It has even been suggested that, at this point in the year in late prehistory, failed kings might be ceremonially despatched and replaced by their successors.

Central to these assemblies was the imparting of seanchas (traditional stories, lore and knowledge). The tales associated with Samhain at Oweynagat tell us of flocks of demonic birds emerging from the cave, birds which possessed a breath so foul that it withered the leaves off the trees. More stories relate the destruction wrought by a herd of magical swine who escaped the cave and caused chaos on the land, stopping vegetation from growing for up to seven years. Legendary warriors are also tested at Oweynagat against three-headed monsters, female werewolves, terrifying wild cats, as well as troops of Otherworldy warriors whose purpose is to destroy Rathcroghan.

These horrific manifestations are regulated in their passage to and from the Otherworld by a goddess of battle, who is described as using Oweynagat as her “fit abode” or lair. This goddess, known as the Mórrígan – an Mór Ríoghain (the Great or Phantom Queen), is a shape-shifting spirit, who uses a variety of forms in order to control her world, including the washerwoman, the grey wolf, a hornless red-eared heifer, and most notably, the raven or hooded crow. Oweynagat is her demesne, and she opens and closes the portal between our world and the Otherworld on that last night between autumn and winter, allowing the processes of winter to take hold.

These tales explain the reason why we dress up at Samhain: we disguised ourselves as the monsters, beasts, and demons that stalk the land on that liminal occasion, so as not to be brought back down into the Otherworld at night’s end. Oweynagat, Uaimh na gCat, Úaim Crúachan or Síd Crúachan – all of these names relay the nature of this physical entrance into a unique part of the mind-set of our early Irish ancestors, a place apart, and a supernatural force that brings winter into the world! Oíche Shamhna Shona Daoibh. 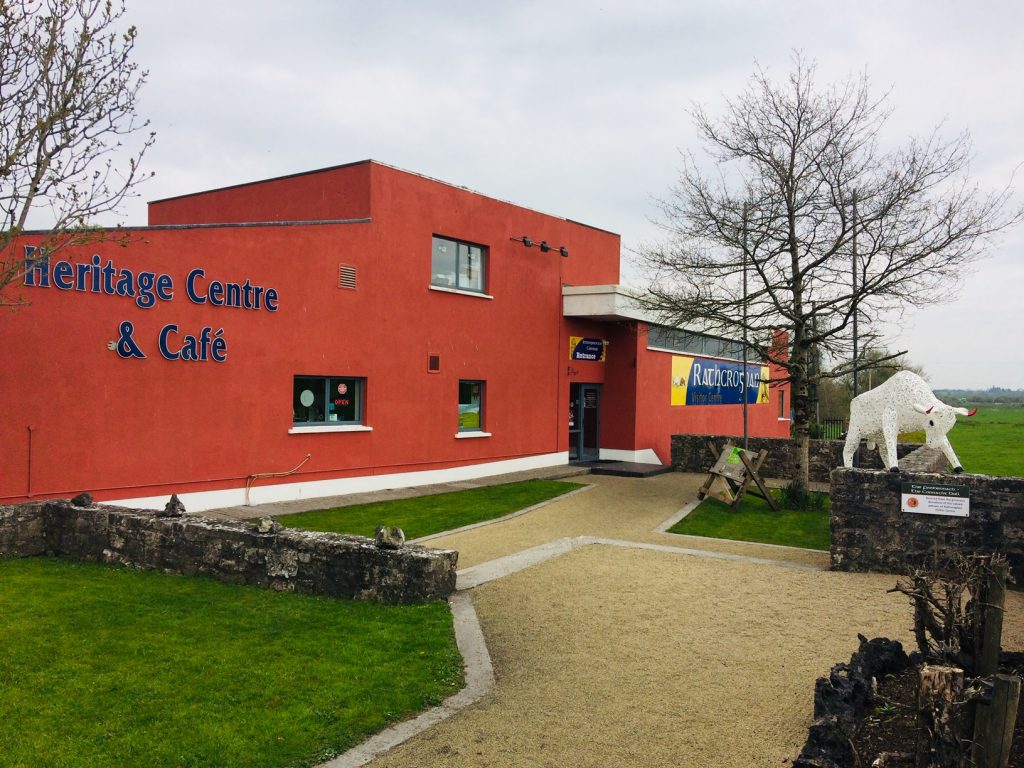 For more information on Rathcroghan, Oweynagat, and the origins of Halloween, visit Rathcroghan Visitor Centre in Tulsk, Castlerea, Co. Roscommon. 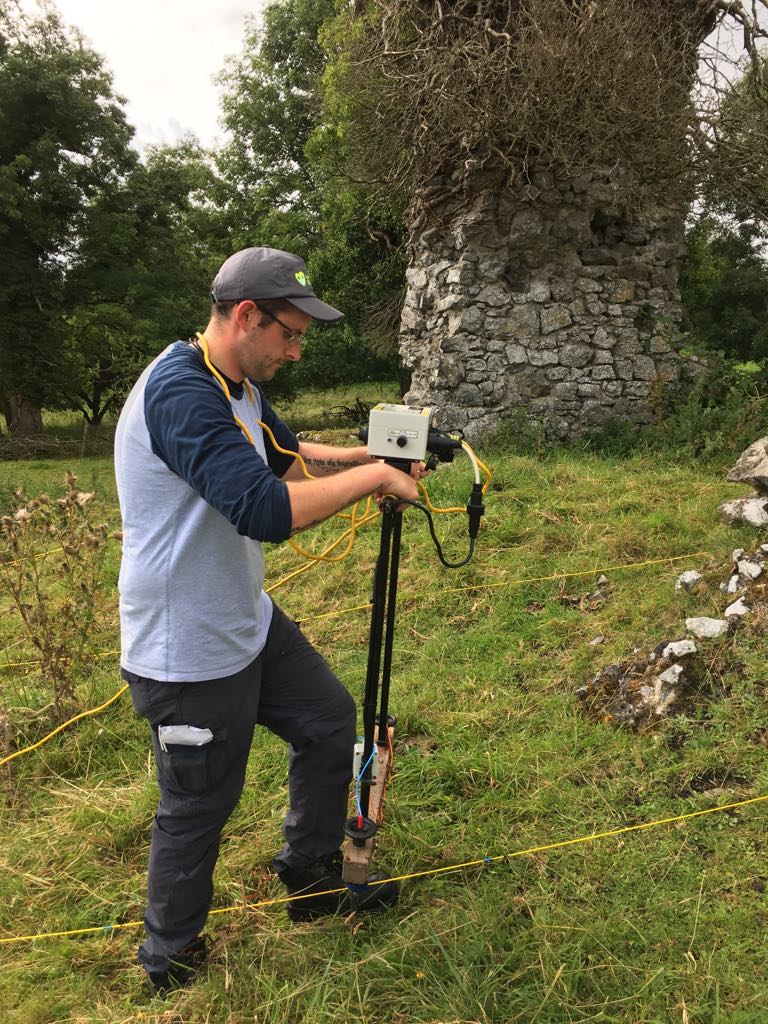 Daniel Curley is currently doing a PhD in Archaeology at NUI, Galway, based on the elite settlement archaeology of the later medieval Uí Chellaig lords of Uí Maine.

He is the manager of Rathcroghan Visitor Centre in Tulsk, Co. Roscommon, where they interpret the Rathcroghan Archaeological Landscape for the visitor through their award-winning museum and guided sites tours.

4 Responses to “Rathcroghan, the Irish Otherworld & the Home of Halloween” by Daniel Curley