This week Trasna is pleased to feature a new poem by Jean O’Brien, “Rupture,” and present two other readings. Jean is an award-winning poet residing in Dublin. She was a founding member of the celebrated Dublin Writers’ Workshop, and has taught in numerous other creative writing programs.

Her work explores the personal, historical, and contemporary. Collectively, these poems are a reminder that objects can speak to us in ways deeper than language; that history, no matter how ancient, lives with us still; and that poetry, that most beautiful language, can reveal our greatest sins, our foulest deeds: “I am here amongst/ the sticks and stones, swaddled in dirty words.”

Its dull case an ornament

in the corner, its use almost

forgotten. someone has taken

the table of the Singer Sewing

machine, once everyone had one.

If you lifted it out you could turn

the handle instead of footing

the treadle. Gone, along

with the table is the drawer

that held bobbins, my delight,

as a child sifting the

When my mother sewed

she favoured the blue bobbin.

All our curtains, whatever the colour,

were backed with blue stitches.

I helped her thread the needle

through a maze of eyes and hooks

down to where the thread vanished

into a small silver box.

stream of hankies from his sleeve;

it conjured another thread

and together, they and we,

At night when mother was busy

I used to slide the lid on the silver

chamber to see if I could figure out its trick.

I only saw the small half-moon lever

moving back and over

the edge of a blue bobbin peeping out.

I knew breath and air and for a brief spell

the smell of sunshine on my mother’s hair,

knew her lips when she kissed my fontanelle,

When the syntax broke, the language of me

fractured, I was wordless, airless, buried

with hundreds of others, small broken birds,

Blue of sky fixed in my eyes when my moon

and sun went from me. I am here amongst

the sticks and stones, swaddled in dirty words

that did hurt me.

At first we shy away from the fallen tree

then gather courage and move closer,

drawn as if by a magnetic field

despite ourselves curious to view

its inner workings, its maze of connections.

Usually we only see trees rise skywards from

the earth, growing always towards sunlight

and forget how, at the same time

they throw out searching roots,

that burrow deep and deeper still.

Some say the *Thuata Dé Dannan

use these erupted places, these pockets

of splintered shadows as portals

We learn now in these strange days

that anything is possible. The tribe

of the godess and gods seem to rise

the soughing of branches, or rustle

of leaves. We cannot see them though

they cloak the very air about us

a crucible where we can catch

the underworld to help Ireland in a time of great need.

Some say that they represent an empowering aspect or our psyche. 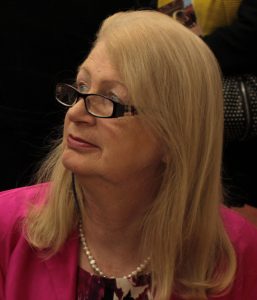 Jean O’Brien has five collections of poetry, her latest being her New & Selected, Fish on a Bicycle (Salmon Poetry 2016 reprint 2018) and is working on her next one. She is a prize winning poet having won, amongst others, The Arvon International and the Fish International and has been HC in the Forward Prize and RU in Voices of War (UCD). Her work appears regularly in magazines, journals and anthologies. She is currently taking part in the former UK Poet Laureate, Carol Ann Duffy’s on-line Covid Diary in conjunction with Manchester University (UK) called Write Where We Are Now. She took part in Epic Museum’s Poetry Juke Box Series and World Food Day, (2019). Her poem Child, about the scandal of the Irish Mother and Baby homes, was chosen by Poetry Ireland as one of their Poems on the Dart (Rail Transport) (2019). She holds an M.Phil. in creative writing/poetry from Trinity College Dublin and tutors in same. For more about Jean and her work, please visit her web page at: jeanobrien.ie

2 Responses to JEAN O’BRIEN Reads a New Poem, “Rupture,” Along With Two Others