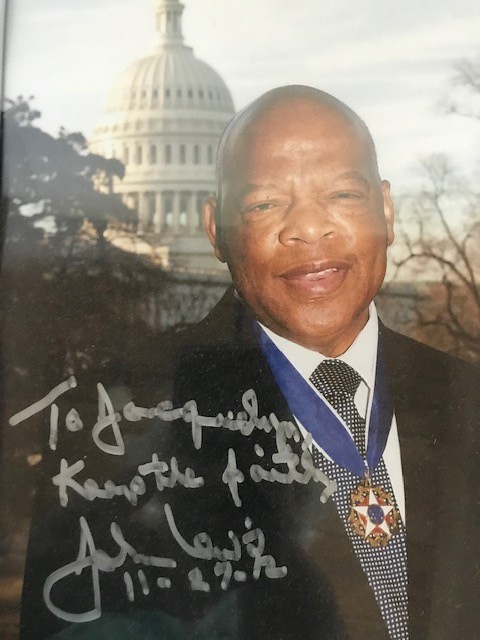 How I came to have an autographed photo of John Lewis

My admiration—indeed, my awe—of John Lewis goes back to the 60s when he was hardly out of his teens. His first civil disobedience event occurred in Nashville, Tennessee, the place I consider my hometown (though I’ve lived in Lowell longer than any other locale).

My mother was the reason I came to follow him in the newspapers. She worked at Harvey’s, the largest department store in the South and a Nashville institution that brought tourists, Black and white, from all over the mid-South to ride the merry-go-round in the infant’s department and to watch the monkeys nearby. The monkey bar had a huge room-size cage with four monkeys that entertained audiences by swinging from synthetic trees, howling, and mugging for their audiences. There were also large cages of mynah birds. Occasionally one would startlingly and pitifully cry “Help!” in a small child’s voice. (The story went that a little boy became separated from his mother.) And there were antique merry-go-round horses all over the store, especially beside the escalators, pointing either up or down.

Blacks were free to visit. And to buy. But they were not allowed to sit at the Harvey’s lunch counters, as they weren’t free to sit at any counter of a white-owned business in Nashville. But the city was a perfect breeding ground for young civil rights activists. It was the home of four Black-only institutions of higher learning: Fisk University, American Baptist College, Tennessee A & I, and Meharry Medical College. It was a perfect place also for James Lawson, a young man who had been to India to study Gandhian non-violence. He established a group from all four schools that met regularly to discuss non-violent protests.

It was this group, including a young John Lewis, that showed up at Harvey’s to sit-in at the lunch counter beside the children’s department that my mother worked in. According to David Halberstam, who wrote a book about the beginning of the civil rights movement in Nashville called The Children, they were turned away politely at Harvey’s, unlike the protesters at the other large department store in town, Cain-Sloan’s, where they were treated with contempt and physically forced from the counter. But my mom was upset. A lifelong Southerner, she still didn’t understand why they had to leave.

From the large department stores the protests spread to the lunch counters at Woolworth’s, Kresge’s and other downtown retailers where young activists like Lewis were beaten and arrested. Nashville was in the national news for weeks. The whole of downtown was filled with agitation, and my mother came home each night, distressed by the violence and disturbed that she was too frightened to express her solidarity with the students.

She wasn’t the only one. Nashville was, in some ways, chosen as a testing ground. It was a border state where there were more moderate voters than in the Deep South. The poll tax law, prevalent in the South, had been repealed and as a result the state had many Black voters. Nashville also had a moderate mayor, Ben West, as well as a progressive newspaper, The Tennessean. As it turned out, it had a moderate store owner, too. Fred Harvey and the executives of his store worked with the mayor and others in bringing an end to white-only lunch counters.

It was my mother’s dismay and her emotional solidarity with the students that left an indelible mark on me. As I followed the news and became active in civil rights activities myself, I began to hear again and again the name John Lewis: as he was arrested at lunch-counter sit-ins, as he participated with the Freedom Riders, as he spoke at the March on Washington, as his skull was fractured by police on the Pettus Bridge in Selma, and as he worked in Robert Kennedy’s presidential campaign. Finally, he became a representative from Georgia.

So it was somewhat amazing that, when I was volunteering in the Elizabeth Warren senate race, I met a young man from Atlanta. I asked him why he was working in a Massachusetts election. He said his boss wanted to see Warren elected. So I asked him, “Who’s your boss?” When he said, “John Lewis,” I blurted out, “John Lewis! He’s my hero!”

Two weeks after our conversation, I received an autographed photo of Lewis standing before the Capitol wearing the Medal of Freedom awarded to him by President Obama. His message to me: “Keep the faith!”

I’m a long-time Lowellian, but I was raised a Southerner, living during the first twenty years of my life in a small farming community, then in a small Tennessee town, and finally in Nashville. Recent events, such as the Black Lives Matter movement and especially the death of John Lewis, have jarred my Southern self and made me remember some of the poems I’ve written about being a white Southerner.

Holes in the River

He was my age
and I met him once.
He seemed afraid of me,
which made me shy.
He sat in a corner chair—
his feet not touching the floor—
while his daddy pumped gas
at my daddy’s filling station.

My dad felt his unease
and offered him a Coke.
But he refused—though I could tell
he wanted one.
Maybe it was because he felt
a Black child should hold back.

We swam in one hole in the river;
they swam in another. Near the Black hole
was a white’s man’s fishing spot.

I never knew the men who watched
him struggle. I heard
they laughed.  I heard that, laughing,
they walked away.

They didn’t have to drag the river.
He caught on a branch.
But we caught there, too,
in the wide arc above the water.
And the radio did and the newspaper, and then TV
zeroed in on those cackling throats.
Under the camera’s watch,
everyone could see what bubbled up.

The farm had a history of ghosts
lynched from a fence-row tree.
When we passed the white man’s farm,
my dad couldn’t remember
which tree it was his father
had pointed to, the history
slowly fading as the tree has faded
in the bleach of time.

My dad’s been dead for decades,
and as we drive past where
the Clark Brothers General Store once stood,
I try to remember which road
leads to that farm—as if I would
still remember which farm.

But ghosts are a stickier lot. Even time
cannot erase their heft.

Jacquelyn Malone is the author of a poetry chapbook (or pamphlet) called All Waters Run to Lethe(Finishing Line Press), and her work has appeared in many literary journals, including Poetry, Poetry Northwest, Salamander, Naugatuck River Review, and the Beloit Poetry Journal, all top-tier publications. She holds an MFA in creative writing from Warren Wilson College, where she studied with Louise Gluck and other writers. Recently, she joined Warren Wilson alumni for a reading. 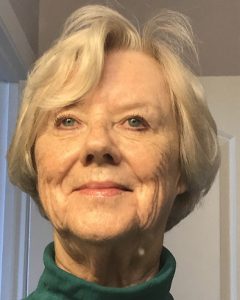