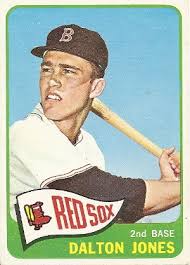 We dig into the archives for this story by Paul about a teammate of Tony Congiliaro’s on the 1967 Boston Red Sox.

‘This Is Dalton Jones’

I played baseball for Dracut High School for four years. I wasn’t a regular starter. I played shortstop, second base, and wherever I could help. I was a much better hitter in neighborhood games and in pick-up softball later in my life, but I held my own in high school—one time broke up a no-hitter with two outs in the last inning in Billerica. In 1965,  when I was 11 years old, my favorite Red Sox player was Dalton Jones. He batted .389 in the 1967 World Series, playing third base in games one through four. He was 7 for 18 with a .421 on-base percentage in the Series. Boston lost to St. Louis, as we all recall. I remember a newspaper cartoon the day after the series showing a sad kid in a Red Sox cap who had scrawled these words on a wall: “Julian Javier is a Jerk” (you have to say it with the j’s as h’s)—Javier was the Cardinals’ second baseman. Dalton was such a good prospect coming out of high school that the Red Sox asked another great left-handed hitter to recruit him: Ted Williams.

One Response to ‘This Is Dalton Jones’