Suzanne Dion: She Loved the Game 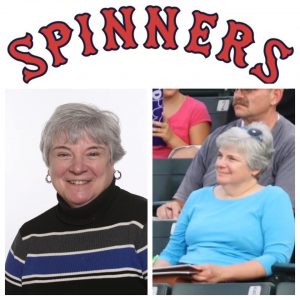 LeLacheur Park was Suzanne Dion’s summer haven–a place to celebrate the Lowell Spinners’ victories, to grieve their losses and to simply enjoy nearly 20 summers of minor league baseball just 10 minutes from her home.

Suzanne was a highly intelligent woman who likely found all the intricacies of baseball and its history a worthy challenge. But she was also thrilled just to sit in the stands watching the antics of Canaligator and his fellow mascots, the offbeat video and cartoon clips played season-after-season on the jumbotron, and especially toddlers racing the Canaligator around the bases between innings.

Hall of Fame shortstop Cal Ripken, Jr. once said “You could be a kid for as long as you want when you play baseball.” Suzanne would amend that to say “as long as you’re watching baseball.” Like the accomplished editor she was, she’d also have tweaked Ripken’s grammar while she was at it.

She and her father, the late Norman Dion, were among the very first to hold season tickets to Spinners’ games in 1996, when the team played at Alumni Field off Rogers Street.  They followed the team to LeLacheur in 1998 and had seats in Section 107, four rows above the dugout.

When her father felt he could no longer manage the bleachers, she kept both season tickets and shared them with family and friends, most often sharing them with me, a friend and former colleague at The Sun.

Her father was a die-hard baseball fan, and he conveyed his passion for the game to his daughter. She learned how to keep a baseball scorecard–which baseball writer Chaz Scoggins calls a lost art–under her father’s tutelage. Sitting in her seat above the first-base dugout with a scorebook on her knee, she drew attention from adults and children alike as she filled in the boxes with Ks.

She knew the careers of many legendary and some not so legendary players. She also knew the rules of the game probably better than many umpires. When I got home after a game, I often opened my computer and googled a rule she’d just cited, and found that I still didn’t get it.

By the first game of a Spinners’ season, she had done her own ‘scouting’ of new players and would tell me which ones to watch for potential careers with the Red Sox and other major league teams. Among those she pointed to were Kevin Youkilis, Jonathan Papelbon, Jacoby Ellsbury, Clay Buchholz, Mookie Betts, Jackie Bradley Jr., and Andrew Benintendi.

These players and many others became part of her bobblehead collection. On ‘bobblehead night’ at the park, she would be among the first at the gate to make sure she scored one.

After the 2012 season, she was offered seats in section 108 in the first row above the dugout. That move changed her involvement with the team because she became friends with a group of fans who serve meals to the young players after every Saturday night home game. She contributed a huge volume of potato salad to those meals under the bleachers. The young players–many in their late teens–devoured the meals ravenously. Players from visiting teams noted sadly that their supporters didn’t feed them.

Truthfully, it wasn’t just the game that drew her to LeLacheur. The park is a perfect place for people watching and eavesdropping on loud conversations from the rows above. Sometimes the conversations were silly as people who knew little about the game tried to explain it to other novices. And sometimes they were lessons in being careful what you say in public places–city employees, for example, complaining about their bosses.

Even in the last weeks of her life–she passed away on April 19th–she kept her eyes on the Spinners and worried about the team’s future at the hands of major league baseball owners. She fumed about the stupidity of owners who were blind to the role that minor league teams and  games play in developing fans of the game.

She loved the game, and, I think the early lessons from her father informed her conviction that fans are developed when they are quite young. Without teams like the Spinners, the game she loved would be in danger.

As Iowa farmer Ray Kinsella said in Field of Dreams, “If you build it, he will come” (not “they” as it is often quoted). Suzanne’s father built a baseball fan in his daughter, and she wanted to see youngsters in the stands at LeLacheur grow into fans, too. Fans like she was–someone who saw the game with the wonder of a child but with an adult’s appreciation of its rich lore.

3 Responses to An Appreciation of Suzanne Dion, Baseball Fan