This month Trasna is featuring writers participating in Words Ireland National Mentoring Programme. Every year, 22 emerging writers are selected for the program in the areas of literary fiction, creative non-fiction, children’s/YA fiction, and poetry. Each writer is paired with a mentor.

Featured this week is poet Enda Wyley, an accomplished Irish literary figure, who served as  a mentor for Martina Dalton in the Words Ireland Programme, 2019.  Of participating in Words Ireland, and mentoring Dalton, who appeared in Trasna earlier this month,  Wyley writes: “‘Martina Dalton is possessed of her own distinctive poetic voice, which is intelligent, imaginative, often surreal – and always driven by a fierce commitment to the poem itself and the journey it wishes to take itself on.”

As Enda Wyley establishes her place in the pantheon of Irish literary greats, she continues to teach and to mentor promising writers.  In the pieces  she has offered to Trasna, she shows us what it means to be an artist, as she calls life’s bittersweet experiences into being and beauty. Her offerings this week come in a variety of mediums, including an essay, poetry, and a video poem. 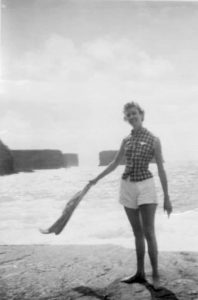 “THROUGH THE WINDOW” by Enda Wyley

Her first piece,  an essay entitled “Through the Window,”  originally featured on the radio show Sunday Miscellany, movingly recounts the loss of her mother, a nursing home resident during this time of COVID. Listen to Enda reading her  essay here. This essay may well become a signature piece of this time in our history. Above is a photo of Imelda Wyley, Enda’s mother. 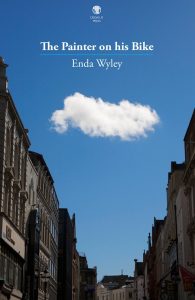 As he cycles down

the twist of string

loosens for a second

catches in the wheel

by the sudden sight

of his dead father’s eyes.

before I saw myself…

He stops at the kerb,

tugs at the twine, frees it

from the spokes, sets off

And later, a fire lit,

rise up, from the face

In the attic dark the red box

that’s waited for years to be

hauled down into the light again.

of your past, all dusty – your ancient longing

made real with the swipe of cloth

and those poems you wrote still there

from when you’d first imagined them,

How you ran through the snow to lose her,

unlearning her name to find her again in days

of bed and feasts of wine, nights of Callas –

that I later reached for on the bookshop shelf,

knelt to read in the hush of the poetry corner.

Her alabaster breasts, his querulous stare

and poised quill, her gentle hand on his

trembling in the palms of my hands,

this ledger of lost love I’d never read before

that thrilled, made me stand up then make

for the door, our future racing out onto

Dawson street and into the wideness of the city,

Larkin raising his hands to me, the gulls cawing

encouragement as I sought you out, your face staring

from a high window over Parnell Square, waiting for me,

the life you’d described becoming ours, the door unlatched.

Note: This poem is inspired by a collection of poems by Peter Sirr, The Ledger of Fruitful Exchange, (1995, Gallery Press) with its cover painting, ‘Self Portrait with his Wife, Anna Maria,’ (c. 1800) by Robert Fagan, the Hunt Museum, Ireland.

Finally, her poem “Home” is dramatized in the attached video and the narrator is her young daughter Freya. 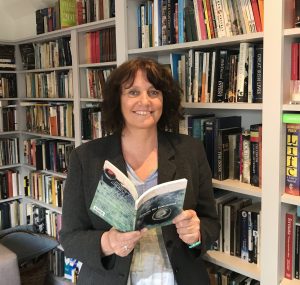 Enda Wyley was born in Dún Laoghaire, Co Dublin. She is a teacher and writer and is a member of Aosdána, the Irish academy of artists. She has published six collections of poetry with Dedalus Press: The Painter on his Bike (2019 ) Borrowed Space, New and Selected Poems, (2014), To Wake to This, (2009),  Poems for Breakfast, ( 2004 ), Socrates in the Garden, (1998) and  Eating Baby Jesus, (1993). She was the inaugural winner of the Vincent Buckley Poetry Prize, Melbourne University and was the recipient of a Patrick and Katherine Kavanagh Fellowship for her poetry. Her poetry has been widely broadcast, translated and anthologised including in The Harvard Anthology of Modern Irish Poetry, Lines of Vision, The National Gallery of Ireland and If Ever You Go, One City, One Book. She has been poet-in-residence for many projects and institutions including: The Coombe Maternity Hospital, Dublin, and The People’s Acorn, a sculpture project for Áras an Uachtaráin, the official residence of the President of Ireland. Enda Wyley’s books for children from O’Brien Press, are Boo and Bear, I Won’t Go to China! and The Silver Notebook. Her poetry for children has been included in anthologies such as Something Beginning with P, O’Brien Press and Once Upon A Place, Ed Eoin Colfer, Little Island.