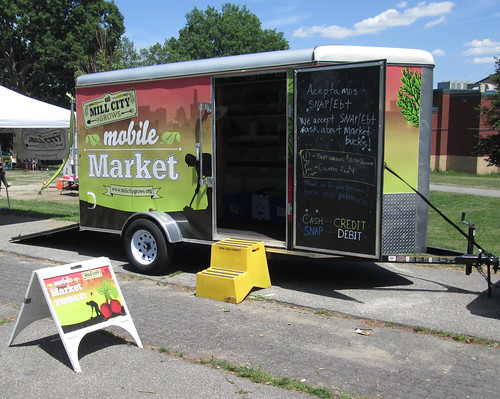 Five years ago Fred Faust contributed a series of blog posts about people in Greater Lowell who have taken initiative and achieved special things. In the following post which first appeared here on October 5, 2015, Fred wrote about Francey Slater and Lydia Sisson, the founders of Mill City Grows. Francey and Lydia have moved on to other things, but they left Mill City Grows in great hands and it continues to thrive. Yesterday’s kickoff of the 2020 schedule of the Mill City Grows Mobile Market prompted me to reach back into the archives and re-publish this post.

“To be in the farm industry as a young woman, you have to work really hard. You have to make sure that everyone knows you’re for real.”

Francey Slater and Lydia Sisson are modest about it, but they want to change the world. They see healthy foods, healthy families and greater community participation as changing health trends for the better, including a way to combat the frightening increase in childhood obesity. Fortunately, they decided that their healthy start would be made in their adopted city of Lowell. The named their organization “Mill City Grows.” To be sure, it is growing. After hearing their serendipitous story, it is hard not to think of these two young women as the proverbial two peas in a pod.

At the start of the recorded discussion about the organization, Slater helpfully suggests noting the contents of each speaker’s remarks with their names. “Are you going to be able to tell us apart? People say we sound alike,” Slater states.

The history of Slater’s and Sisson’s work together supports a theory of predestination.

Both women have strong social commitments. Both had majored in college in aspects of agriculture. Both had acquired practical experience by getting their hands dirty. Though in different schools and at different times, both had chosen food related internships or farm work in Italy. These type of experiences gave them a sense of food in a cultural that valued quality, presentation and natural, healthful ingredients.

A SEED GROWS AT UTEC

“We actually first met at a job interview in Lowell,” explains Slater. “I guess once we spoke, we found out we were cut from the same cloth.” The details are that Slater interviewed for a job at a food program at UTEC in Lowell. She had graduated in 2003 from the University of Pennsylvania, majoring in Psychology and Biology. Sisson graduated in 2006rom Vassar College with a degree in Environmental Studies.

As of 2007, Sisson was departing a farm support type job at the non-profit youth group and was asked to be part of an interview team. Slater was one of the candidates interviewed and offered the position but decided at the time to continue working in Cambridge. Subsequently, they kept on running into each other at events and social gatherings. At another such encounter in Jamaica Plain, Sisson says they laughed about these continuing occurrences, remarking at about the same time, “Hey, we should be friends.”

When Slater and her husband decided to find a more central apartment location because of their commutes, Sisson and her spouse offered to rent them an apartment. According to Slater, “They owned a two family house in Lowell. They said do you want to rent the upstairs apartment? And that worked out pretty well. That was really the fertile ground for all of this.”

The conversations about working together picked up steam given their new proximity.

They cemented their relationship and agreed that they should give up their full time jobs. They laugh about their income for the first six months but credit their spouses for their enthusiasm and full support. In 2011, they founded Mill City Grows.

Today, the non-profit’s assets include eight full-time, five part-time employees and a budget of $550,000. They have a farm site and multiple neighborhood gardens. They have also acquired a retail food van, farming equipment and many, many enthusiastic volunteers. They have won grants, started school programs and have been generally recognized as having achieved dramatic successes over a very brief period of time. Recently, they held a fundraiser at UTEC’s auditorium and function hall that drew over 200 people there to celebrate their success. This year, they each had their first child – about one month apart. At 31 and 34 years of age respectively, Sisson and Slater lead busy lives.

WE KEPT ON COMING BACK

Professionally, Slater and Sisson encountered immediate skepticism about their plans. When they had tried to meet with the former City Manager, two assistant city managers were delegated to speak with them. Slater recalls, “They said, you want to do what? A farm in Lowell? A garden? Oh sure, cool. But so many people had come to them with interesting ideas,” said Sisson, “We were not going to be persuaded otherwise. We kept on coming back, trying to figure out what we needed to do to make this idea a reality.”

Interestingly, the City Hall skeptics ended up being some of their strongest supporters. Sisson explains. “One day, Henri Marchand suddenly called back and asked, do you still want to do that garden thing? I think I found you something.” Adam Baacke, then Assistant City Manager for Planning and Development, caught the enthusiasm and later joined their executive board. The City supported collaboration with the active Back Central Neighborhood Organization, rewarding them for their interest and initiative.

Sisson also described their first meeting with Tom Bellegarde, the longtime Parks Commissioner in Lowell. “When he first met us, he just said ‘no way.’ This is never going to work.’ Now he’s really supportive. He does so much to support us and help us succeed. Tom is great.”

“So that probably is the kind of thing that happens to everyone,” Sisson recalls, “but we were not going to be persuaded otherwise. No, we were going to do this.” Slater and Sisson procured a grant from Lowell General Hospital to get started with a focus on health benefits of diet. They had enough now to pay themselves for five hours of work each week. They kept moving forward, participating in an accelerator business program offered by e for all, a non-profit that advances innovation and entrepreneurship in the Merrimack Valley.

Meanwhile, the first initiative with the Back Central neighborhood had kicked off. The neighborhood and their supporters were a great fit. Dave Koch and his large family and their friends had already been planting fruit trees and reclaiming abandoned property in the area.

Explains Slater, “So to get started we had set up a board, build a model, and a brand. We were going to quit our jobs. Wow, we said, we’re going to actually go through with this. The City had the money to put in a garden through the City Manager’s Neighborhood Impact Initiative. David Koch and the neighbors were great, but they didn’t know where to start.” Sisson continues the story. “And we were like, we can do this.” Slater just smiles. “And you know what? Neither of us had ever even started a community garden.”

The production of a community garden in Back Central commenced a new building program. In an urban community with a history of post industrial waste, a community garden – especially a large one as you see on Middlesex Street in the downtown – is not a simple or inexpensive matter. The bed needs to be framed, raised and significant clean soils must be brought in. Irrigation is needed. There is a need to till, plant, fertilize and separate crops. And of course, there is watering, weeding and the harvest. Training sessions, volunteer recruits, and “guardians” of the gardens all were needed. To date there are four community gardens in Lowell.

Mill City Grows has also developed educational programs and events, such as the Annual Harvest Festival that took place a week ago at the North Common in Lowell. An astounding 1,000 people plus attended the harvest event that brought life and attention to the historic North Common. The organization also has a truck and trailer that sets up as a portable fruit and produce stand. Weekend booths have been a success as well. Slater and Sisson, however, point to partnering with the Lowell school system and school children as the potential game changer.

“The partnership piece for us has been a huge opportunity,” says Sisson. “Working in the schools here, for example, it’s just been the kind of thing that’s become so much larger than us. It’s part of a culture shift. That way, we’ll be able to influence hundreds and thousands of kids.”

The satisfaction of starting a new and successful endeavor is just the beginning for Slater and Sisson. They’re working on a strategic plan for the next five years. They expect to up their budget by about 25% next year. They are strong believers in the need to scale up to be able to make an impact on the health and wellness of entire communities. As people are more conscious of food and health issues than ever before, they say modestly that they just happened to be here at the right time and that Lowell has been the “right place.”

Slater credits the openness of Lowell to new ideas. She also says that the ability to seize on existing contacts and partnerships is essential. Sisson continues. “Healthy food, healthy eating, and healthy communities. If we achieve that with the schools, it means that our mission has leapt forward without having to build the infrastructure from the ground up every time we start out. Leveraging existing partnerships is what it’s all about.”

Because two positive, dynamic and socially committed women decided to get their hands dirty and because they never gave up; Lowell has a most inspiring story and healthier future.

“What is initiative,” asks Sisson, mulling the question. “Initiative can be refusing to say no. But it also can mean showing up too.” Partner Slater agrees. “Yes, for the gate to open, you have to be constantly trying. I think we’ve been able to thrive just because, again, we just keep showing up.”

Finally, Francey Slater and Lydia Sisson credit their husbands, Aaron Slater and Derek Mitchell as among their strongest and most committed supporters. At this weekend’s harvest festival or on another crisp day this autumn, you will expect to see Aaron and Derek, likely with babies Julian and Layla in their front packs. You can also expect to see Lydia and Francey, the Mill City Grows co-founders enthusiastically planting new seeds wherever they go.