Diary in the Time of Coronavirus (8) 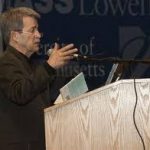