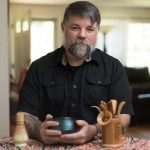 On Thursday night, I got a call from my mother’s assisted living facility. She is running a fever, I was told. They are testing her, again.

My mom has had dementia for over a decade. When it first became clear there was a problem, she would get lost while driving short distances. Her car would pull into the driveway with unexpected dents. One time, she went to get her taxes done at the local branch of a national accounting chain, drove back home, and then returned to have them done again. The same broker did her taxes and charged her a second time. It doesn’t take a reader of Tolkien to know that orcs and goblins are real and live among us.

She began to hallucinate that wildfires were breaking out on the street where she lived. She heard the sounds of crying babies in the yard at night and would wander around in her nightgown, searching for them by moonlight. Vacuuming at midnight, sometimes for hours, she would pass over the floorboards, sometimes laughing, sometimes with a face contorted by anger.

On Friday, I got a call that her fever had subsided. False alert. Back to normal.

On Saturday, I got a call that she had tested positive. We wait.

Since last summer, my wife and I had behavioral and sleep issues with our toddler. She is a curious, warm, funny individual, with a strong and engaging personality. But she was also struggling, and doctor visits and parenting guidebook research yielded no clues as to how to help her.

At times, the lack of sleep was impacting my health. I would put her to bed, after hours of cajoling, at 10 or maybe 11 p.m., only to have her wake up a few hours later and insist on playing. We tried being stern, mean, kind, gentle, playful, angry. Nothing worked. It felt hopeless.

So I started complaining about it.

I posted videos of her at 2 a.m. along with messages of desperation. And other parents began to write to me and tell me of their experiences. My wife and I took some of the advice, and decided on a few radical changes.

And now everyone sleeps through the night with rare exceptions.

What did we do?

The first step was to turn off the TV. Early on as parents we decided to restrict the screen time of our young ones, but our dedication to this noble decree faltered quickly. It was too easy to put on the TV and let her zone out to the electronic pacifier.

Out of desperation, we assumed the roles of stern overlords and banned daytime viewing. We allowed one show each night. Because the baby went to bed before this show started, she is no longer watching any television at all.

Within two or so days of implementing our policy, about half of the behavioral problems disappeared. And she didn’t even seem to miss watching TV.

As for sleep, we started rubbing magnesium oil on feet an hour before our targeted bedtime. A friend told me she put magnesium in her child’s milk when he had sleep problems and this worked. We didn’t have the powder, but I had an old bottle of the oil (not really an oil, by the way, although it feels like one). At first, our toddler was scared of the tingling sensation it produced, but soon began to look forward to it. I can make no health claims about magnesium oil, and for all I know the tingling sensation it produces results in a heightened placebo effect. But it worked.

Which is all why I’m able to sit out here in the garage at 6 a.m. writing this while my family sleeps. The weather is finally warming up. I hear no chainsaws or buzzsaws or engines — just birdsong from all directions. I am barefoot, and my toes are cold and my hands are shivering slightly. But otherwise I’m wrapped in a blanket … and look at this! Just saw my first hummingbird of the season!

Three: A Commonplace Book of the Pandemic

Thoreau used to keep a “commonplace book.” This was composed mostly of quotes he hand-copied from his readings. I don’t think this was an uncommon practice at the time. We do something similar, some of us, with memes, but the relationship changes when you do the work yourself and are not merely copying and pasting.

In fact, the essay as a genre may have grown out of a related practice. I was talking with a scholar friend who said Montaigne’s “Essais” grew out of the habit of jotting down quotes — write out a quote from antiquity, and then append a meditation on the lines.

“No, I’m am going to avoid building any arguments. I am going to refuse to stake a claim, to build a case and then defend it. The minute you circle the wagons you are vulnerable. What if you didn’t even want to defend that territory? What if it was not worth dying for? Everyone is picking fights out there. In the streets at night, on the feeds when they should be working, in 140 characters with borrowed opinions and impossible levels of anger. I can’t do it, not anymore. It’s all wasted energy, the flaring of a billion daytime candles. Why light them? What do they illuminate?”

“Our ferry’s crossing seemed to be taking longer than usual. From what we could remember of previous crossings, this seemed longer to us. Otherwise, matters proceeded in their usual fashion and things appeared to be the same, with none of us entertaining the notion that we hadn’t wanted to come.”

“Why is it that every time we try to break through the physical matter that fetters our spiritual effervescence, all our efforts are in vain? Only music defeats matter on this earth. A few airy tunes, a melodious breeze blowing from the soul, have the power of a blowtorch, melting all our material shackles in its intense flames.”

“Across America one light after another seemed to burn out. The oil lamps of another age flickered and died. The sign was silent, but the books on my night table beckoned. The Children’s Crusade. The Colossus. Marcus Aurelius. I opened his Meditations. Do not act as if you had ten thousand years to live . . . This made terrible sense to me, climbing the chronological ladder, approaching my seventieth year. Get a grip, I told myself, just revel in the last seasons of being sixty-nine, the sacred Jimi Hendrix number, with his answer to such a caution: I’m going to live my life the way I want to. I imagined Marcus and Jimi clashing, each choosing a massive icicle that would melt in their hands long before they acquiesced to spar.”

-Patti Smith, “Year of the Monkey”

“Let’s say you are on the lookout for the best possible trout stream or lake. What fisherman isn’t? You have been hearing about Silver Lake from some other anglers and would love to give it a try. Silver Lake, your friends tell you, is located directly southwest of the Blackton railway station. But there is no road from the train station to the lake.”

“For I live in a Porcelain room, a hard and brilliant palace in which the Imagination delights. This is not a symbol or a play on words. Later on I will yearn to weigh my words before I write them down. For a long time I have been setting down here everything worthy of a Palace of the Imagination.”

-Victor Segalen, “Journey to the Land of the Real”

“The radical psychiatrist R. D. Laing, among others, has said that the growing incidence of mental illness these days may be explained in part by the fact that the world we call real and which we ask people to live within and understand is itself open to question. The environment we live in is no longer connected to the mix of planetary processes which brought us all into being. It is solely the product of human mental processes. It is real, but only in the way that a theatrical play or a fun house is real. Our artificial environment is there and we can experience it, yet it has been created on purpose by other humans. It is an interpretation of reality, it no longer reveals how nature works and it cannot provide much useful information to human beings who seek to see their own lives as part of some wider natural process. We are left with no frame of reference untouched by human interpretation.”

Jerry Mander, “Four Arguments for the Elimination of Television”

“There is nothing more notable in Socrates than that he found time, when he was an old man, to learn music and dancing, and thought it time well spent.”

-My toddler, age almost 3, apologizing to my wife because I went into the basement to find some books