At the blog, we’ve had a great response to the series of updates on writers linked to Lowell and the region. My co-blogger Paul Marion contacted the writers and did the overviews of their activity in the past year as well as hints about what’s forthcoming in 2019. I wanted to be sure we included Paul in the round-up, which is not complete. We will be adding more writers in February. A couple of stand-out things have happened since we’ve posted about the writers. Jack Neary’s play Trick or Treat opened Off-Broadway with positive reviews, novelist David Moloney will be profiled in the fall issue of Merrimack Valley Magazine, and Matt Miller won a contest for a cycle of sonnets, proving he can write inside and outside the lines, so to speak. Speaking of plays, the Sunday Boston Globe previewed Merrimack Repertory Theater’s spring production of The Haunted Life, an adaptation of a Jack Kerouac short novel from 1944, set in Lowell, which he calls Galloway as he did in his first novel The Town and the City (1950).—Dick Howe

Paul Marion: Back in the Writing Saddle 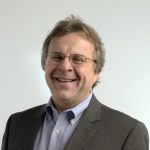 Many of our readers know that Paul wrapped up his long career at UMass Lowell in early 2016 and subsequently relocated to downriver in Amesbury last May with his wife Rosemary, who retired from her longtime job at the Lowell Plan, where she managed the Public Matters leadership program. Paul quickly turned his attention to writing, editing, and publishing in a way that he had not been able to since he was in his twenties and starting out on his writing path. Rosemary has stayed involved in community affairs, serving on boards at the Pollard Library, New England Quilt Museum, and Lowell Cemetery.

I asked him to summarize what’s been going on lately.

“Thanks, Dick. It’s been a busy couple of years. Of course, we did the big blog book, History As It Happens, covering ten years of the RichardHowe blog, through my Loom Press (40 years and counting), and Loom Press put out a collection of Michael Casey’s poems, new and selected work (There It Is), which earned strong reviews. And I was lucky enough to get my book Union River: Poems and Sketches published by Bootstrap Press of Lowell. Ryan Gallagher did a super job on the cover design.

“In the pipeline is a book called Haiku Sky from superlargeprint.com books on the west coast. When I heard what Brendan Gaylord is doing with books for low-vision readers (he’s the son of my longtime friends Susan and Charlie Gaylord of Newburyport), I thought haiku with so few words would be interesting to try on the pages with large type. Brendan liked the idea, so the project is underway. Jennifer Myers gave permission to use one of her remarkable photographs on the cover, an image of red maple leaves in fresh snow from a storm this past November. I hope to have the book in late spring. The haiku are ones I’ve written in the past 40 years. Brendan works mostly with material that is in the public domain, from Lincoln’s speeches to vintage fiction and sections of the Bible. I’m the first 21st-century writer for his company. He started doing the books one at a time for his grandmother who was running out of large-print books to read. With the haiku, the book will be both a visual and literary statement.

“I’ve been writing pieces for the new Bean Magazine, a spin-off of the popular Merrimack Valley Magazine. Bean is aimed at coffee lovers and the coffeehouse culture with articles about beverages, travel, food, the arts, lifestyle, and more. MVM publisher Glenn Prezzano did a deal to get Bean in hundreds of Barnes and Noble bookstore cafes around the country. The second issue is due on the street any minute. I wrote the cover story about MRT’s upcoming Kerouac play. Editor Doug Sparks worked with his design team to develop a stunning cover that is an homage to a famous Spider-Man comic cover. Kerouac loved the comics in his day and drew some himself. I also did the “On Coffee” interview with British writer Ben Myers, whose novel The Gallows Pole will be published in America this year, the first fiction from rock musician Jack White’s publishing company, Third Man Books. He’s got a record label by that name also.

“And I’m working with poet and painter Chath pierSath on preparing a big collection of his poems. Chath has been around the area for a long time. He has a master’s degree in community psychology from UMass Lowell. We’ve had a few of his poems on the blog. He’s involved with a vegetable-and-fruit farm in Bolton down Route 495 and travels to France and Cambodia for his art and interest in social issues. Last year, a gallery in Paris showed his new paintings. He has a strong body of work that should be out there. He intends to submit the collection to high-profile manuscript competitions run by university presses and top independent publishers.”

In May, Globe Pequot Books will release Geoffrey Douglas’s collection of magazine articles from his days at Yankee magazine. Geoffrey has been writing for the UMass Lowell alumni magazine for many years and is the author of several books including The Classmates, about his time at St. Paul’s prep school with the likes of John Kerry and Robert Mueller, and The Game of Their Lives, the story of the 1950 World Cup soccer match between the U.S. and England, which was won by the Americans against all odds. The book became a movie. The new book is The Grifter, the Poet, and the Runaway Train: Stories from a Yankee Writer’s Notebook, and our friend and co-blogger is the poet in the title—Geoffrey’s 2009 Yankee story about Paul,“The Man Who Loves Lowell,” is reprinted in the new volume. Congratulations to Geoffrey. We’ll be watching for this one. Here’s the link. 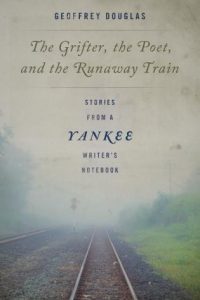 A final note. Paul’s been working on what he calls “a memory book” since the fall, a book of creative nonfiction that revisits his time as a kid and young guy in Dracut, from the mid-1950s to 1980. Although born when his family was living in Centralville, he moved to Dracut early on and stayed there through college and a little after. He says it’s an “episodic memoir” about the first wave of suburban pioneers after World War II. There’s a lot about his parents and French Canadian ancestors as well as what it was like to grow up in the time of President Kennedy, the Beatles, the Vietnam War, and moon landing–and it’s about his first steps on a writing path. He’ll tell us more as the book shapes up in the next few months. He’s got 65,000 words so far. There’s no publisher for this one yet.

One Response to Paul Marion: Back in the Writing Saddle