Live Poetry in Lowell
by Janet Egan and Paul Marion 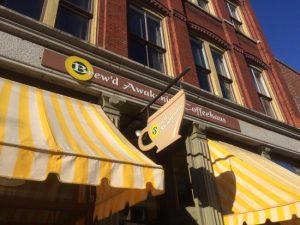 Lowell has been long-famous for Golden Gloves boxing matches at the Memorial Auditorium, but there’s a different competition for which the city has become well known. Every first and third Tuesday of the month, writers and their audience get together for the Untitled Open Mic at Brew’d Awakening Coffeehauson Market Street. Part of the nightly format is a poetry slam that qualifies participants for the Mill City Slam team.
How does a Poetry Slam work? This form of performance poetry or spoken word poetry is traced back to Chicago, Illinois, in 1984, a movement that added elements of theatre and sports to the presentation of poems. Another twist was the addition of judges pulled from the audience who ranked the competitors as the contest narrowed to a winner for the night. Reading poems in public is not new, in fact, that’s the root of the art form, storytelling. Dylan Thomas, Robert Frost, and other household name poets added to their popularity by reading to audiences. Through the mid-twentieth century, readings of this kind were common at universities and cultural institutions. But then came the Beat Generation writers of the 1950s, whose inclination was to follow Walt Whitman’s advice: “Unscrew the locks from the doors! Unscrew the doors themselves from their jambs!” In nightclubs, from festival stages, on benches in city parks, the Beats stood up and spoke out in a fresh way. It’s fitting that Lowell has a strong open mic culture in Jack Kerouac’s hometown.
In Lowell, Douglas Bishop is the slam master for the Mill City Slam. Last summer, Mill City once again sent a team to the National Poetry Slam in Chicago. The 2018 team representing Mill City in Chicago included Danielle “Scribbles” Bennett, Alex Hicks, Amanda Malnati, Mike Linehan, and Ricky Orng.  Alternate members who represented Mill City in Northbeast regional competition when needed included Douglas Bishop, Joe Bordeleau, and Thea Harris.  Scribbles, who has since moved to Arizona, was also one of the coaches of the Billerica (Mass.) Poetry Club, a poetic phenomenon of youth writers. They reached the semifinals at Louder than a Bomb (LTAB) in 2018. Lowell’s award-winning slam group, FreeVerse!, did not send a team in 2018.
One of the veterans of FreeVerse! is Febo (Anthony Febo) of Lowell and now Jamaica Plain, who was profiled in this series last month. He shared with us the news that Free Verse! is part of a three-year development grant from the state Cultural Council for youth poetry slam leaders in Boston, Worcester, and Lowell.
FreeVerse! alum Hailey Tran, who is highly talented, socially conscious, and “very Lowell,” won the 2018 Yung House Grand Slam Championship (a youth-led slam group in Roxbury, Mass.) and earned a place on the MassLEAP (Massachusetts Literary, Education, and Performance collective) international youth poetry slam team that went to the Brave New Voices festival in Texas last July. A student at Simmons University in Boston, she’s involved with the MassLEAP program for youth spoken word leaders. Another Lowellian and FreeVerse! alum is Elmer Martinez, who is in his senior year at Emerson College in Boston, where he is studying lighting design and dancing, while still doing poetry. This past fall Elmer was a featured presenter at Brew’d Awakening and at the Lizard Lounge in Boston. Two of Elmer’s poems are in the anthology Untitled from the Untitled: 10 Years of Spoken Word and Slam in Lowell, MA (Broken Head Press, 2017). 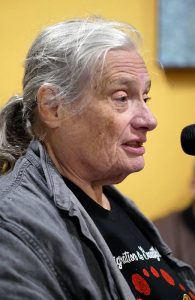 Co-author of this post, Janet Egan, is represented in the Lowell spoken-word anthology–PM
Several of the poets mentioned here are among the 24 writers in the Untitledanthology. This is an important publication, especially when taken together with an earlier book, Young Angel Midnight: An Emerging Generation in the Arts in Lowell,a showcase for writers, visual artists, and musicians, edited by Ryan Gallagher and Derek Fenner and published in 2011 by Bootstrap Press of Lowell in partnership with the Cultural Organization of Lowell. A spokesperson for the Massachusetts Cultural Council said at the time that no other community in Massachusetts had done such an ambitious project to promote its emerging artists. The book received a New England Art Award in 2012.
Young poets in Lowell (photo: Douglas Bishop)
Every October, the Lowell Celebrates Kerouac! literary festival sponsors a high-school poetry slam at Lowell High School. The 2018 winners were recognized at the Brew’d open mic last month. Of particular note is Mablean Ntoro, who won the Kerouac in 2017 and placed second in 2018. For more information about poetry slams, Louder than a Bomb, MassLeap, and FreeVerse! (Merrimack Valley Magazine article), follow these links