Matt Kraunelis believes in the power of poetry to make a community more vibrant. I’ve known Matt since his days as a founding member of the Robert Frost Foundation in Lawrence, which has brought poets like Seamus Heaney and Robert Pinsky to the city in past years and sponsors literary festivals and readings. He has since organized the Grey Court Poets, a writing-workshop group in Methuen, Mass., whose members do public projects. The group is named for one of the community’s palatial estates of old, Grey Court Castle, which burned in the 1970s. The property is now a state park, popular with artists and photographers. The Methuen resident is the author of Tackle Box, a collection of poems that was nominated for the Massachusetts Book Awards in 2014.

Matt is director of administrative services for the town of Reading. A graduate of Merrimack College (English Lit), he has a law degree from Suffolk University. For our series about writers in the region, I asked him to brief us on his recent activities and those upcoming. 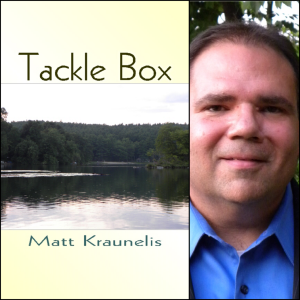 “I’m working on a full-length collection of poetry that I hope to finish during the first half of 2019. Highlights of my year were the publication and launch of the book Soulmates: A Union of Visual Arts and Poetry, a collaboration between the Grey Court Poets and the Arts Institute Group of the Merrimack Valley, both of which are based in Methuen. I have several poems in the book, which is a collection of short poems based on artwork that is reproduced in the book. We had a very successful launch event in Methuen in September attended by about 50 people—and we’re bringing the show on the road with an event at the Whistler House Museum in Lowell on January 23 at 6:30 p.m. 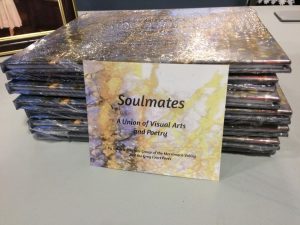 “One of my passions is community organizing around poetry and the arts. I’ve been working with a new group named Methuen Arts whose mission is to bring more public art and creative place-making to the Methuen area. I attended the Mill City Grows Harvest Festival this fall with the leader of Methuen Arts, Michelle Leger. We were inspired by your ‘poetry pumpkins.’ [John Wooding of Lowell’s Mill City Grows and Lowell’s City of Learning initiative displayed a mini-anthology of Fall-themed poems by well-known writers on 20 pumpkins set out in the festival area.] 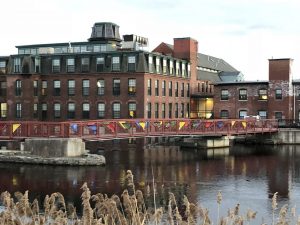 “After seeing that creative installation, we decided to so something similar in Methuen. We put the call out to the Grey Court Poets and other local groups for Holiday and Winter Poems. We got about 50 poems and printed out 29 of them using colorful holiday/winter templates. We made weather-proof banners and hung the poems on a footbridge in Methuen overlooking a waterfall. The project, ‘Words by a Winter Waterfall,’ is very popular and will hang until at least February. Our group is brainstorming more public poetry projects for spring.

“Besides those projects, the Grey Court Poets workshop meets on the first Monday of the month at the Nevins Library in Methuen. We gave several poetry readings last year and will do more in 2019. We’ll be the featured poets at the Robert Frost Foundation’s ‘Poetry Hoot’ on January 8 at 7 p.m. at Cafe Azteca in Lawrence.”

3 Responses to Matt Kraunelis & the Grey Court Poets of Methuen