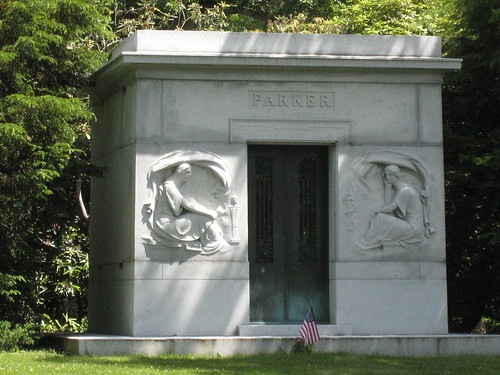 In her post earlier today about Alexander Graham Bell and the invention of the telephone, Marie mentioned that Bell’s good friend (and telephone company investor) Dr Moses Greeley Parker is credited with being the inventor of the telephone numbers. The photo above is of Parker’s mausoleum at the Lowell Cemetery which is a stop on the tour I give.

My understanding of Parker’s “invention” is as follows: In the late 1870s, Parker maintained a medical practice in Lowell while also being a big investor in the fledgling telephone company. At the time, all phone lines terminated at a central station where operators – in Lowell at the time there were only four of them and they were all female – would connect one person’s line to another’s, depending on who you wanted to talk to. The operators knew which line belonged to which person. When a measles epidemic broke out, Parker was concerned that all four of the operators would be quarantined and the city’s phones would be shut down because no one else knew the identity of the lines. Parker reasoned that if the lines were numbered, it would be a more rational system which would be easier for replacement operators to learn rapidly. The system caught on in Lowell and around the world and so we have Lowell being the birthplace of the telephone number.