A Review by Stephen O’Connor 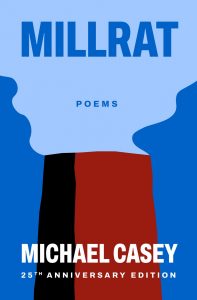 A professor of mine said  James Joyce wrote, “of the common man, but not for the common man.” Who but a graduate student in English would ever attempt more than two pages of Finnegans Wake? And Ulysses, while undoubtedly a work of genius and worth the time invested in it, is not the sort of book that my father would have taken to his easy chair after a day spent finishing drywall.

There are some writers whose writing is both brilliant and written in the parlance of common men and women. I remember meeting my grandmother’s nephew, Tom Toolin, a farmer in County Sligo back in 1972. When I came upon him, he was engaged in the ancient trade of repairing a stone wall. Later, we went into the town of Boyle and found ourselves in the town library. Tom went to the poetry section and pulled out The Complete Poems of Robert Frost. He showed me the card pocket glued into the back of the book and took out the card it held, on which his name was written several times. “I love his poems,” he said.

Michael Casey is a writer that Tom Toolin, or any working person with a decent high school education can appreciate. As a high school English teacher, I used a few of Casey’s poems with my classes. They were not honors students, but they understood and identified with the narrator. However, like Frost, Michael Casey is someone that the graduate student in English will also find impressive. The apparent simplicity conceals a refined craft.

Yesterday, I was delighted to find a copy of Casey’s collection, Millrat, in my mailbox. It has just been republished by Loom Press. It was Paul Marion of Loom Press who introduced me to Casey with a previous collection from that press called There It Is: New and Selected Poems.

Reading that book, I became an instant fan. Of course, I should have already been familiar with a poet from Lowell who was selected in 1972 for the Yale Younger Poets Award for his book Obscenities, which was inspired by his work as an MP in Vietnam’s Quang Ngai Province. A BS in physics from Lowell Technological Institute and a master’s in creative writing from SUNY Buffalo—a blended path for a poet who would eventually publish in The New York Times, The Los Angeles Times, The Nation and Rolling Stone.

So naturally, when I found Millrat in my mailbox, I immediately poured a cup of coffee and sat down with the book. I didn’t browse through it or read a couple of poems because the titles struck my fancy. I read it cover to cover. If you’ve ever worked in a mill or factory, on a construction site, or in any job where you had to punch in and punch out; if you’ve ever sat in a bar or a diner, and listened, really listened, to the people around you, you’ve been in Casey territory.

The author said that someone criticized him for “transcribing” rather than composing. In the same way that a great photographer “sees” the photo and isolates the scene for the viewer, Casey is able to capture the conversation, the exchange, that embodies the character of the speaker. What makes him a true artist is his ability to pick out, from the stream of conversation, from the stream of the quotidian, lines that illustrate something true about the human experience. He hears and understands and transcribes the words and reflections that capture the essence of people in a vivid literary photograph.

The poet, or the narrator of the poem, often concludes with an observation that is not only genuine but often hilarious. The reader will say, “I know these people!” My feeling, and I know I’m right about this, is that Casey loves his subjects—the mill workers, the soldiers, the young women in the knitting room, the guys in the dye house—the working people of America. He loves them despite, or maybe because of, their foibles. If you love the gate keeper in Macbeth or the grave digger in Hamlet, or the train-hoppers and ex-cons that Jack Kerouac meets on the road, you will love Casey’s people.

They are the young workers, trying to figure things out, screwing up, trying to get it right, and learning from experience. The collection opens with a narrator who struck the light pole at the Drum Hill rotary at 3:00 AM. Since the car will not go forward, he backs out of the rotary and attempts to hide the vehicle among a row of parked cars in a lot. His friends “split,” and hiding behind the car, he watches as a cruiser arrives, circles right up to him.

they get me for leaving the scene

driving under the influence

and being a minor in possession

The cop explains that he was able to locate the car by following the trail of the leaking radiator. The speaker concludes with this sad and somber realization:

has to be a genius

Walter, the foreman, Roland, Ronald, Mo, Boisvert, the mending room girl, the French, the Irish, ‘a couple of Portygees’ the Greek who doesn’t speak English well, (‘of course it’s American/to think someone with a foreign language is/either crazy or stupid or both’) the wise guys writing priceless comments on the team-building “Positivity Posters” in the mill, the forklift driver who ‘fucked up the elevator again,’ ‘the new guy’—they are all here, captured in the authentic language that anyone who has ever had a beer in the Old Worthen or a coffee in the Owl Diner will recognize.

. . . so Walter walked over to Ronald

Ron  why don’t you make the soap up

when ya through what ya doin

Ronald went and mixed up the soap

when he got a chance

Walter notice it too

the boss for nothing

It’s a wicked good book of poems. Casey’s voice is unique, and his characters are real. As one of  those characters says, “That’s all I know about it/ That’s all I’m gonna say.” I got the book yesterday and I think I’ve read the whole thing twice, along with the fascinating information and reviews in the back. If you take any literary advice from anyone, take this advice from me—buy the book. As Walt Whitman might have said, you will hear America singing.

Millrat by Michael Casey is available to order at loompress.com

One Response to A Wicked Good Book of Poems: Michael Casey’s ‘Millrat’–A Review by Stephen O’Connor