Blanche’s vision sharpened that October Saturday. People she thought she knew by heart were no longer what-you-see-is-what-you-get. Her mother, for instance, was always in control and made lemonade out of life’s lemons. But seeing her mute and compliant with Officer Kehoe had allowed the light to shine through the cracks of her humanness.

It was the same with Sister Gerald who had turned a blind eye to strict school rules and had encouraged the girls to indulge in sweets, one of life’s simple pleasures. The “crows” weren’t systematically vicious as so many maintained. A French saying came to mind – “L’habit ne fait pas le moine” (The garment does not make the monk.), the English equivalent of “Don’t judge a book by its cover.”

“Sticking everyone into a category isn’t fair. People are like Pierre’s crystals. They have many facets and, even though they’re all about the same, they’re all unique.” Blanche was thinking about her cousin’s enviable rock collection and had started one of her own with a few odd pebbles from the pond and the SFA grounds. “Yeah we all shine differently and that’s what’s important. That goes for Andy, Titi, C, all of the Sisters and me too!” She revelled in putting words to what she had always sensed.

The day’s events rolled around her mind in kaleidoscopic flashes of color as she was slipping on her canary yellow nightgown. Fatigue overwhelmed her and accumulated tension waned. Everything had gone well and, after a sampling of Mrs. Nelson’s, even Andy had ceased her snide comments. There was no reason to have a bad night. But migraines had a funny way of striking when one was about to wind down.

An hour after lights out, sharp throbbing pain behind her right eye interrupted her fitful sleep. Ice cream, chopped ham and candy churned in her stomach. To relieve the queasiness, she took a sip of water from the glass placed on her chest of drawers but as soon as she lay her head down again she felt like dashing to the toilets. Leaving the dorm at night was forbidden so she had to weigh the pros and cons. If she stayed in her cell, the noise of her retching could wake the light sleepers. If she ventured out, the creaky wooden floors could give her away. Irrepressible waves of nausea made her bolt. Just in the nick of time, she made it to the first stall, hit the toilet bowl bullseye and was relieved. A few dry heaves later, she was ready to head back.

As she was about to return to her cell, a slight figure in a pale nightgown appeared out of nowhere. It was neither a nun nor a ghost. Blanche waited for the apparition to vanish but it approached her.

“Is that you PF? What the heck are you doing up? Are you a sleep walker or something? You’re the last person I expected to see at this time of night.”

“I could ask you the same thing Titi? We’d better get back to the dorm before we get caught. I had to puke and I feel better now but I really need to sleep. If I don’t, my migraine will last for days. Are you sick too? What are YOU doing up?” Blanche didn’t want to engage in a lengthy conversion but curiosity got the best of her.

“Oh no, I’m not sick and I’m sorry you are. I often get up in the middle of the night to explore and I’ve never been caught.” Titi looked very sure of herself. Nothing lurking in the shadows could possibly perturb her.

“What is there around here? Just dorms and bathrooms.” Blanche was eager to leave the dark hallway because she had had enough excitement for one day.

Titi’s audacity took over. “OK, you really wanna know? Are you ready? Follow me.” Titi headed back to the toilets, passed the eight stalls and proceeded to the far corner of the cold damp room. A pungent blast made Blanche gag. She wanted to apologize for the acrid smell but refrained. Flushing was too risky. The whooshing sound would echo in the halls.

As the girls reached the back, Blanche whispered. “What are we doing? Let’s get outa here right now!”

“It’s too dark to see anything. What are you talking about?” Blanche was shivering and the migraine was waiting to grab her right eyeball again.

Above their heads was hanging a metal chain Blanche had never noticed.

“Pull on the chain gently PF.”

“What for? It’s the middle of the night and I have a migraine. I don’t know why I’m listening to you.” 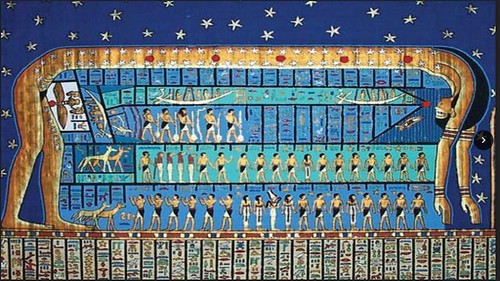 Titi pushed her friend aside and yanked on the chain to open a ceiling hatch and unfold a ladder. Over their heads was the midnight-blue firmament dotted with dazzling white gold stars which resembled an ancient Egyptian tomb fresco Blanche had seen in her family’s Encyclopaedia Britannica. The moon was playing hide and seek behind garlands of clouds whose silver strands illuminated the grounds below.

Titi carefully climbed the rungs and signaled Blanche to follow. As if the night itself were summoning her, she did. The ascent lead to a tiny rooftop balcony, no bigger than two toilet stalls, surrounded by a railing of wrought iron leaves, flowers and urns like those found in the New Orleans French Quarter. Blanche wondered why this elaborate railing had been installed in such an incongruous place. Who came up here and what for? Was it used to escape from daily drudgery? Did anyone come up here to contemplate Mother Nature’s glory? This certainly wasn’t a place of torment. She felt as if she were on a launching pad ready to be propelled light years away.

Barefoot in their flannel nightgowns, still and silent, the two friends drank in the night while the indigo celestial dome cradled their weeness. Like mute metronomes, the twinkling stars set the beat to faint sounds. An owl hooting in a nearby tree seemed to welcome the young visitors to its shadowy domain. A couple of bats whizzed by and an invisible creature made dry leaves gently crackle below. The girls assimilated the sheer stark beauty with a sense of tranquil invulnerability.

“How did you find this place? What is it? Who comes up here?” Blanche asked.

“I’ve been up here a few times but I’ve never talked about it because it’s my secret happy place. Since you shared your box of candy I may as well share it with you. I have no idea who comes here and why.”

Titi fished around in the side pocket of her nightgown. The click of a lighter produced a tiny flame and a circle of orange embers followed by a curly feather of tangy menthol smoke.

“Here, have a drag” offered Titi.

“Are you SMOKING?” Blanche’s shriek pierced the quiet.

“PF, WILL YOU SHUSH! That chick in last night’s French New Wave movie made me feel like a smoke and I was determined to have one so either share it with me or split. I’m warning you though. You may get caught on your way back to your room because you don’t know the terrain as well as I do. So good luck! Either you wait here for three minutes while I finish my Newport or else you take your chance in the creaking floor minefield out there.”

The migraine took possession of Blanche’s head again and gagging made her double over. The smell of smoke had always made her stomach turn.

Titi never called anyone a chicken; it wasn’t in her nature and she sensed that her friend was not well.  After a couple of deep puffs on her cigarette, she helped Blanche down the flimsy ladder, reluctantly abandoning the New Hampshire Autumn night and all of its mysterious inhabitants. To bid the girls farewell, the silver crescent of a moon appeared with a celestial smile from behind wisps of charcoal clouds.