Joe McGowan, a native of Mullaghmore, Co. Sligo, is a noted historian, novelist, folklorist, and an acclaimed storyteller. Readers of Trasna will be familiar with his talent as Joe launched our first issue of Trasna with his piece entitled, “May: Mary’s Month or Baal’s?”

Joe’s essay thoughtfully explored the “green world’s” connections between the ancient festival called Bealtine, which acknowledged the pagan god Baal, and the celebration of the Blessed Virgin Mary with May altars bedecked with flowers and greenery. The feasts paid homage to the season and welcomed the world to summer. Now, Joe McGowan is back to remind us that autumn is just around the corner. The richness of the summer is being harvested. His essay “Rattus, Rattus” offers an unusual twist. He includes ancient beliefs about the intelligence of rats and the power of poetry to control them. Moreover, while we are celebrating the bounty of the fields, Joe acknowledges that farmers are still engaged in a contest with hungry wildlife, especially the ever-present rats. As always, Joe skillfully weaves the tales of ancient ideas and practices with the modern ways of the farmers determined to protect the bounty of their labor. (by J. Judge) 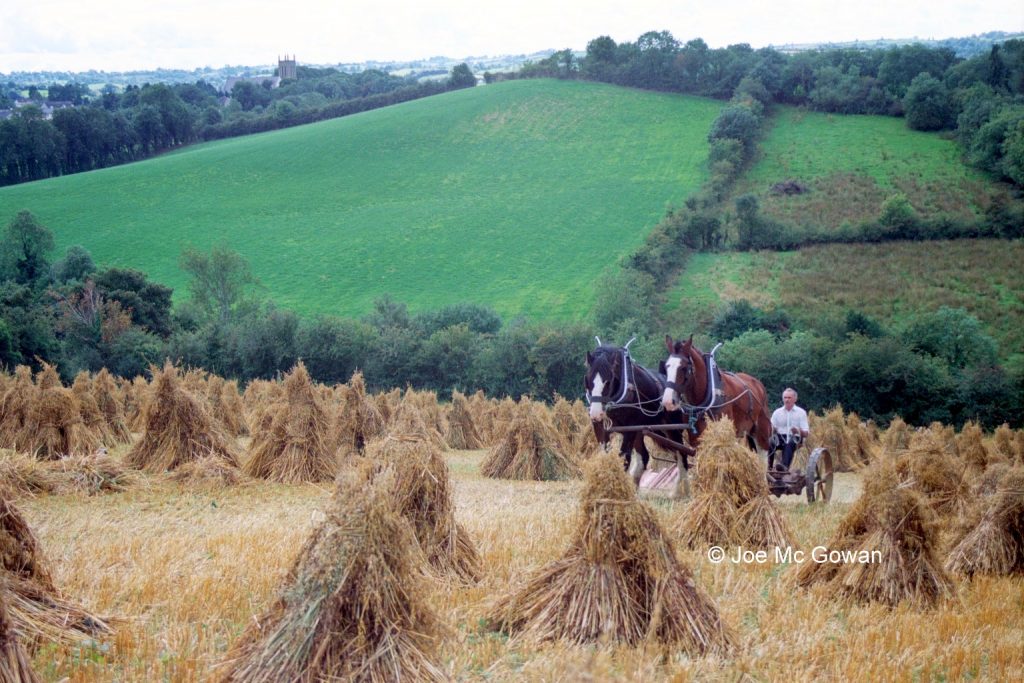 September was the time of year when the big circular stacks of corn were built in a corner of the haggard – a natural home for rats. It provided warmth, lots of material for a nest, and an endless supply of food.  In other words: Rat Heaven!   These stacks were always of oaten straw.  Rye straw, needed for thatch, was handled more carefully and brought straight from the stooks in the field into the barn

In country fields, the rats were always with us.  They were just as much a part of the wild landscape as the hare, the fox, or the rabbit.  In a rat hierarchy, however, they seemed a cut above the slithering rodents that haunt sewer and refuse dumps –and quite removed from their lower-class urban cousins, which were described by T.S. Eliot as dragging their “slimy [bellies] on the bank, while I was fishing on the dull canal.”  You might say that to be a field rat then had some status!  They had as much a right to make a bid for the bounty of the fields as we did, and they had gathered their food there as long as, and possibly longer, than man. That said, we hated and feared them and could only hope, at best, to control their numbers. Despite the constant war being waged against them, they could not be eradicated. There was just too much food everywhere in field and barn.

Although we regarded them as pests, some among us had great respect for their intelligence. Believing the rats could understand human speech, farmers would not speak out loud about their plans when putting down traps in case the rats might hear.  Some farm folk held that if you wanted to rid an area of the rodents all that was needed was to stand near the entrance to their holes and tell them where they could find other accommodation.  But the place had to be specific and sound much better!  A wise man might make sure the new home was across running water because rats, like witches, detested this and would be unlikely to return even if they didn’t like the new place. Judicious farmers in Co. Tyrone and in Antrim judged it prudent to seek out the head rat and address any advice to him.

Admittedly, the practice of talking to rats was not confined to Ireland.  In France a special formula was used: “Male rats and female rats, I conjure you by the great God to go out of my house, out of my habitations and to betake yourself to [name the village], there to end your days.”  In 1943, in the U.S.A., Colliers magazine published an account of similar practices by farmers in the state of Maine.

Indeed, there is a long tradition of agriculture in which  frazzled farmers tried to cajole the rodents off their lands. For example,  Frazer in The Golden Bough quotes an ancient Greek tract on farming which advises anyone wishing to rid their lands of mice to take a piece of paper and write on it:  “I adjure you, ye mice here present, that ye neither injure me or suffer another mouse to do so.  I give you yonder field [specify the field] but if ever I catch you here again, by the Mother of Gods I will rend you in seven pieces.” This curse is enough to intimidate a strong man, never mind a humble, if literate, mouse! The procedure was to stick the paper on an unhewn stone in the field before sunrise with the written side up. 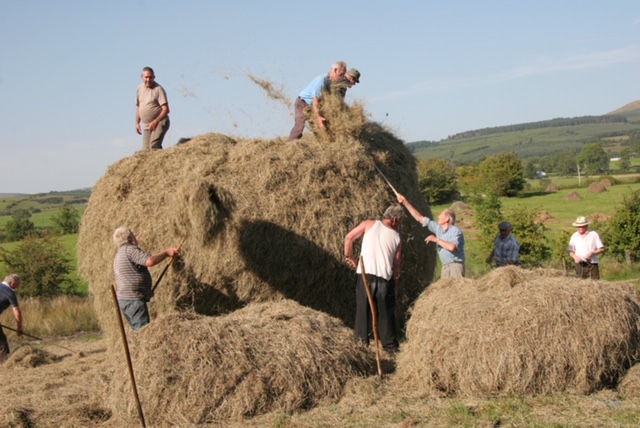 The last such recorded banishment in Ireland happened in the parish of Riverstown, Co. Sligo, at the end of the 19th century.  A woman who lived near Kilross graveyard, concerned with an infestation of rats there, went to a local priest for help.  She was afraid they might colonise the thatched roof of her house and so place her in great danger. The priest wrote something in Latin on a piece of white paper for the worried woman, giving her instructions to say certain prayers for a given number of days.  She was then to attach the paper to the gate leading into the graveyard. Following all instructions carefully, she waited and watched.  Some time later, to her astonishment, she saw the leader of the rat colony take the paper in his mouth.  Gathering behind him the rest of the rodents, they “swarmed through the bars of the old gate, crossed the road and plunged through into the townland of Knockatubber and were never seen afterwards.”

In an incident recorded in an American magazine in the 1920’s a farmer there took a more diplomatic approach.  Appealing to the rodents’ sense of fair play,  he wrote a civil letter to them and pinned it up in the barn.  The note, advising the rats, claimed his “crops were short, that he could not afford to keep them through the winter, that he had been very kind to them, and that for their own good he thought they had better leave him and go to his neighbours who had much more grain than he.”

We Irish, however, understand there is a time for everything. So, when the last few sheaves of our straw stack were moved indoors for scutching, the rat families’ homes, nests, and tunnels were exposed to the bright sunlight.  Ousted from their hidden havens and left with no place to hide, they were forced to make a run for it.

The race was on — big rats, small rats, little huddles of blind, pink, hairless baby rats still in their nest of chopped straw; swift rats scurried through the long grass darting here and there in search of a place to hide; smarter ones went straight for the cover of the stone ditch.  Like the rats of Hamelin made famous in Robert Brownings’s poem they,

fought the dogs and killed the cats,

And bit the babies in the cradles,

And ate the cheeses out of the vats,

And licked the soups out of the cook’s own ladles,

Made nests inside men’s Sunday hats,

And even spoiled the womens chats

By drowning their speaking

With shrieking and squeaking

In fifty different sharps and flats…..’

Some rats in blind panic went straight for the opening at the bottom of the nearest trouser leg. Unfortunate neighbours who didn’t have the foresight to tie the bottom of their trousers realized the terrifying experience of having the frightened rat climb up inside.  There was nothing for it then but to try and hold the twisting, clawing, biting beast through the cloth until the trousers were removed and the now mangled rat with them.

Most of us were unfamiliar with the genteel methods of spoken and written persuasion, which seemed to work for some farmers, and we had no Pied Piper to help us, but the family dog was in his element.  He darted here and pounced there barking madly. Snatching the escaping rats with bared teeth, he tossed them high in the air.  Grabbing them by the back of the neck, he bit through the spinal cord and left them chewed and lifeless on the grass.The children whooped as the grownups chased the rodents with pitchforks, following their rapid movements as they twisted through the grass.Eventually, impaled on the sharp prongs, the rats twisted in agony, squealed horribly, and died.

Our practical natures aside, we Irish have significant linguistic magic. In ancient Ireland it was commonly held that rats could be killed through rhyming verses.  This power, held by the poet classes, was recognised outside Ireland and recorded by the playwright Ben Jonson who wrote, ‘Rhyme them to death as they do Irish rats.’    Even Shakespeare was aware of this humane and uniquely Irish method of pest control.  In As You Like It, Rosalind notes the charming practice of lulling rats to death through poetry.  “I was never so be-rhymed since Pythagoras time that I was an Irish rat,” she says.  Yeats, too, was familiar with this power and mentions it in his poem, “Parnell’s Funeral”:

All that was sung,

All that was said in Ireland is a lie

Bred out of the contagion of the throng,

Saving the rhyme rats hear before they die.

The ancient Irish poets exercised their power to kill lower animals through a spell called an aer. Senchan Torpeist, 7th century chief poet of Ireland, holds the distinction of being the first person on record to apply this unique power.  Once, in anger, when his dinner was eaten by rats he uttered an aer on them which began, “Rats though sharp their snouts, are not powerful in battle…”  It is recorded that, following this slur on their good name, ten of the hairy mischief-makers dropped dead on the spot.  Noble rats, no doubt, who were so humiliated at such an insult to their valour that they just fell over and died!

A time of honour, warriors and heroes indeed — even in the rat world.

Joe Mc Gowan is a native of Mullaghmore, Co. Sligo. His short stories have featured on local and national radio programmes such as RTE1s Sunday Miscellany. He is author of several books: In the Shadow of Benbulben; Inishmurray: Island Voices; Constance Markievicz: The People’s Countess; Sligo: Land of Destiny; A Bitter Wind; Echoes of a Savage Land; The Hidden People, and most recently the classic Sligo Folk Tales.

One Response to “Rattus, Rattus” by Joe McGowan