David Daniel’s latest book is Inflections and Innuendos: Flash Fiction Riffs (2017), which is available to order here. He is a frequent contributor to our blog. 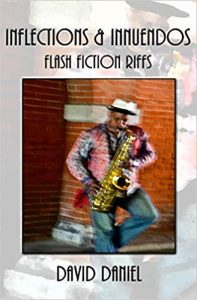 The Sommelier of Faces

You know someone like this. Someone with a thing for pairing faces. Like . . . check that guy . . .  a little mix of Colin Farrell and your kid brother. See it? Helen Mirren . . . in the cheeks, right? Openness around the eyes. Samuel L. Jackson? In the set of the jaw . . . resistance . . .

Joey Haddix was like that. When we were in high school he was always going on about people looking like other people—he’d name a kid, from the football team say, and go, “Doesn’t he remind you of Charles Bronson?” Or nod at a girl in the cafeteria and whisper, “Julie Christie’s sister.” Not that any of the people would ever win a separated-at-birth contest, but I would see where he was going. A funny thing is Joey Haddix had the most ordinary face you could imagine.

Years later he had his own reality TV show for awhile. My mother, rest her soul, got into it, and I’d watch it with her sometimes. He’d have on “experts” discussing the DNA of faces, the ethnic links, the genetics of family, race, culture. They’d talk about classical Greece and the ideal of physical perfection, or go into the newest facial recognition technology. The best part was when audience members would do a blind sampling of headshots to see if they could match what Joey Haddix saw. He was good. Someone (probably Oprah, my mother loved her show, too) said he was like a “sommelier of faces.” I had to look that word up.

I ran into Joey one night recently in our home town, at a carnival that comes each autumn. It’s been years since his show got cancelled. Even longer since I’d seen him in person. I went up and said hi.

He squinted. “You look familiar.”

I don’t know if he made the connection or not; he looked a little vague.

“Anyway, congratulations on everything,” I said. “How are you?” Our yearbook never predicted him for success at anything special (or me, either, for that matter; and in my case the non-prediction has been accurate). “Are you still pairing faces?”

“Huh?” He wasn’t listening; he was gazing down the carnival midway, which curved away like a necklace of beads on purple velvet. “I met Katy Rosen along here,” he said quietly. “Just by chance. She was sixteen-and-a-half, I was seventeen. We had soft pretzels and cotton candy, and then I asked her to ride the merry-go-round with me.”

I was trying to picture that girl from our class, picture Joey with her.

“She said okay. I was thinking it’d be a good place to get a kiss . . .” He and I looked at the carousel as it swept laughing riders into the glittering dusk. “But the horses kept moving, and I never got any closer.”

“Bummer,” I said. I couldn’t think of what else to say.

Joey’s face seemed to be trying to arrange itself into some clear emotion, but it looked only opaque. “I think it was Katy . . .” he murmured. “Or Karen? Super cute, with this trusting quality about the eyes . . .  kind’ve like a young Gene Tierney. Remember her? Or Nanette Fabray, even?”

“Maybe I should’ve suggested the roller coaster. Wonder what would’ve happened if we’d hit it off, me and her? If I’d married her? Had kids and stuff. It’s been years. Would my life be different?”

But he wasn’t really asking me for answers. He was trying to fathom where time had gone. I watched the carnival lights glimmer in his eyes. He reminded me of  . . . someone.

2 Responses to A Story by David Daniel: ‘The Sommelier of Faces’