My friend Renae Lias, a former colleague from UMass Lowell, is reporting on the presidential campaign in New Hampshire. Renae is a communications professional who has worked in state government and on government relations for higher education. She attends local events in N.H. and exchanges updates with a small group of friends on Facebook. I asked for permission to cross-post her latest report about Sen. Corey Booker as part of the continuing coverage on this blog of the presidential race.– PM 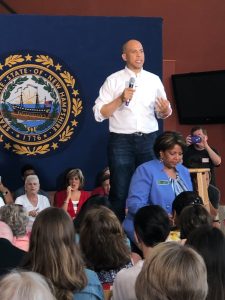 Sen. Corey Booker on the Trail in New Hampshire

Sen. Cory Booker of New Jersey spoke at Nashua Community College around noon today. Yes, he was a little late, and no, I wasn’t able to stay for the questions, so I may have missed something important at the end. There were about 150 people at this well-run, well-staged event.

The Cory Booker “Live” show is everything everyone says it is. He is engaging, he is funny, he’s a great storyteller, he knows how to flatter an important ally while also recognizing the man behind the woman (her husband, who is NEVER recognized and does so much). There is no doubt, Cory Booker connects with his audience. His warmth and heart come through while he delivers a searing analysis of the nation’s problems that reveals his advanced education and intelligence without sounding AT ALL professorial or self-righteous. He reveals his bio–rather than tells it–via anecdotes and conveys his experience by talking about how he got things done, either as Mayor of “Noork” (learning this is how natives pronounce Newark) or in the U.S. Senate–yes, even in the Republican-controlled Senate.

He is spot on about what we have lost as a nation–not only since Trump was elected, but beginning long before that. “The last fifty years, we’ve stopped investing in each other… Just trying to raise the minimum wage, here in New Hampshire, we can’t. We’ve stripped the dignity from work.” He says the minimum wage should be three times what it is so that those who work hard would be able to afford to live. He has plans that involve dramatically raising the Earned Income Tax Credit as one way to address this problem.

He talks about, of all things, POVERTY–which “we will CRUSH.” (This topic gets me every time, and why I cast a soon-to-be-much-regretted vote for John Edwards in the N.H. 2008 primary. Anyone remember “The two Americas”?) And then he lays out a plan to attack poverty–one part of which involves granting every newborn an interest-bearing account with up to $2,000 in it, depending on the family’s income. This will dramatically improve chances of completing college, he says (and I think there is data backing up this claim).

Toward the end of his stump speech, he says, “This might get me into trouble with Dems, but this election cannot be what we’re against, but what we’re FOR.” Then later: “We can’t win by FIGHTING. I’m not that candidate.” He says a supporter told him he needs to punch Trump in the face. “And I said, Dude, that’s a felony!” (This sounds corny, but in person he delivers it very well.) “We need to understand our common cause.”

Warm, funny, intelligent, attractive (in a bit of a goofy, almost lovable way) but not at all cocky, he offers soaring rhetoric combined with a very down-to-earth approach. Has executive experience (as Mayor of a BIG city with some BIG NYC-type problems–largest in N.J. and 67th in country) and some Congressional chops. Certainly, progressive enough to win a democratic primary.

So why is Cory Booker not among the front-runners?

My personal belief is that he is not going to make it to the top tier. I’m fairly sure I will not be voting for him. The main reason is this: With so many GREAT women candidates running AND a heavy hitter with a head start in name recognition across the country because he was V.P. and beloved by African-Americans–it’s hard to find a reason why someone would choose Booker this time around. (I like Kamala Harris, Eiizabeth Warren, and Amy Klobuchar–I think any one of them would be an excellent president. I also like Biden a lot and think he can win.) So why would I vote for Booker?

I simply think it is not his time, but, hopefully, his time will come.