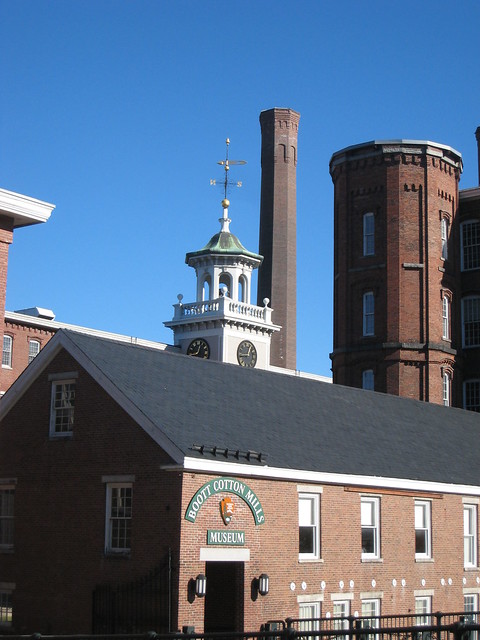 Youngsters who are made to troop through America’s historic landmarks might reasonably conclude that in the past, rich was typical. Ordinary people are shown mainly as servants, or as slaves, in the sumptuous mansions and town houses that predominate in what are grandly called “heritage tours.”

Labor Day is a powerfully apt occasion to celebrate an exception: the Lowell National Historical Park, set in a gritty Massachusetts city. Here America’s working men and women have starring roles in the epic called “The Industrial Revolution.” A thundering score sets the mood, provided by 88 belt-driven looms in an unusual factory museum run by the National Park Service.

Lowell became America’s first factory town when Francis Cabot Lowell, a Boston merchant, spirited from England the secrets of the power loom. Two years later, in 1813, he and a mechanic fabricated an American prototype. Within a decade the first mill opened in Lowell, ingeniously using split-level canals to turn the turbines that powered the looms.

By 1848, when Lowell wove 50,000 miles of cotton cloth, it was also the laboratory for a “Golden Experiment” that elicited admiring comments from visitors like Charles Dickens. 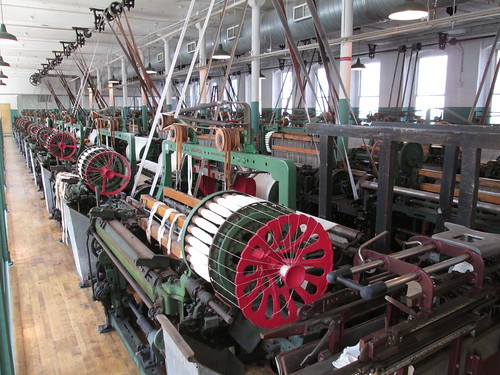 But the sounds at their workplace, less uplifting, are recaptured in the Boott Cotton Mill Museum, just opened this June, where visitors truly need earplugs to enter the weave room. The noise is bone-jarring. One articulate mill worker, Lucy Larcom, found she could accustom herself to the noise, so it became like a silence. “I defied the machinery to make me its slave,” she wrote in 1889. “Its incessant discords could not drown the music of my thoughts if I would let them fly high enough.” These mills were not, like those in the old folk song, made out of marble nor the machines made out of gold.

By this time, farm girls had been replaced by low-wage newcomers from Ireland, French Canada, the Baltics, Greece and Portugal. It is to the great credit of the Park Service that the harsh face of mill-town capitalism is not ignored. Taped interviews with retired workers evoke the horror of industrial injuries, the squalor of tenement life, the class bitterness that erupted in the great strike of 1912.

This is an American past that many grandparents lived, and still remember. Youngsters who experience even for a moment the gloom of these old mills will better understand why trade unions sprang into being to check rapacious capital.

The Lowell park and museum realize an imaginative scheme put forward in the 1970′s by former Senator Paul Tsongas, a child of Lowell. Restoring the old canals and the long-shuttered mills has given new hope and dignity to a Lowell now entering the post-industrial revolution.

What better time than Labor Day to remember that the toil and pain of ordinary working men and women was the ultimate lubricant for all the machines. “It is the boast of Lowell that it has no aristocracy, either of wealth or talent, or of rank or position,” Charles Cowley, a local historian, wrote in 1856. “It is simply a city of mechanics, who have made the world ring with their achievement.” A proud boast, and warranted.