A review by Mike McCormick 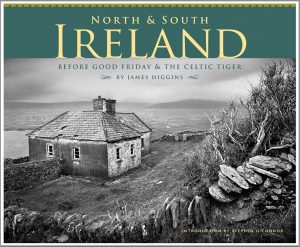 James Higgins’ handsome new book of black-and-white photography captures the Emerald Isle that parents and grandparents of Irish-American baby boomers could recognize as their ancestral home. Higgins shot the images in both the Republic of Ireland and Northern Ireland over a four-year period beginning in 1982. The photos convey a breadth of experience in the years immediately prior to the influx of multinational corporations in the South and peace in Northern Ireland.  Snippets of commentary and literature accompany most photos.

Irish photo books typically feature selections of iconic landscapes such as the Cliffs of Moher along with an array of impressive castles and mansions. Higgins’ book eschews the obvious and well known. His images offer glimpses into the lives of citizens in a bygone era. With only a few exceptions, Higgins’ subjects would rarely be recognized outside of their own neighborhoods and towns. And the locales, again with only a few exceptions, would not be listed on many guided tourist itineraries.

The richly detailed photos reward repeated and sustained viewing. Stories are told and questions brought up. Did the young couple jammed into the phone booth ride there on the bicycle propped against the back wall of a boarded-up building? Is the boy leaning on the back of a truck carrying junk cars related to the grizzled, pipe-smoking man looking away from the camera at the front left-hand corner of the photo? Is the girl in her First Holy Communion dress waiting for her parents to finish a drink in the bar behind the lounge door where she stands? What is that child doing standing behind the pub bar? 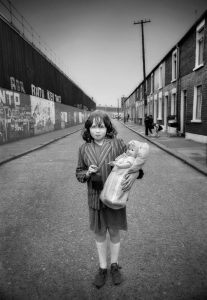 With the exception of a single female fiddler, every picture depicting a working adult shows a man. Higgins portrays quarry and bridge workers, a milkman, circus workers, a butcher, a cab driver, fishermen mending nets, bus mechanics, and a man resting, hands in his pocket, against a stack of peat piled for fuel. If Higgins’ photographed Ireland today, he’d undoubtedly find many more women for his consideration; in the 1980’s a greater percentage of women were homebound.

Higgins scatters photos of young children and teenagers, both male and female, throughout. Lovers caress in a side of a battered concrete bathing shelter while a shiny car sits idle in the foreground. Children, perhaps siblings, play on the edge of a tinker camp. A shot of a newspaper boy catching a brief snooze as he leans against a lamppost charmed me.

Besides the paperboy picture, other photos remind us of the importance of reading in Irish life. We see a commuter perusing a paper as he awaits a train in an empty Belfast rail station; a bespectacled senior citizen sits in front of a Renault on a folding chair also reading a newspaper. A 1984 photo depicts four lads seated against a storefront enjoying comic books. On the opposite page, a couple of booksellers sit with proud, beaming faces in front of floor to ceiling shelves of hardcovers.

The single most telling photo and caption in the entire book is wedged between these two photos of readers. Dermott O’Connor, a proprietor of “The Natural Shoe Store,” smiles in front of the store’s sign. The caption describes how Dermott’s business imports shoes from Denmark, Holland, and Germany and that many young people were leaving Ireland because of recession. The photo and caption provide a lens into the future; Dermot’s store was a harbinger of the multinational Irish Tiger invasion.

Higgins’ explorations coincided with the greatest flowering of interest in Irish music in our lifetime. In the early ’80s, The Chieftains, The Boys in the Lough, and other Irish ensembles ignited an interest in traditional music. A photo of an American fiddle player performing for legendary local musician Gussie Russell in O’Connor’s Pub in Doolin pays homage to ongoing Irish music traditions.

Concurrent to the explosion of traditional music interest, Dublin’s rock superstars U2 and punk rock bands such as England’s Sex Pistols developed international followings of more contemporary music.  Four photos, all shot in Northern Ireland, call attention to the exploration of punk fashion and evolving musical developments in that strife-torn country. 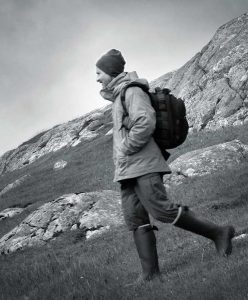 Photographer James Higgins in the field

A number of Higgins’ Northern Ireland photos show people going about their daily business in the midst of stark, decaying cityscapes often plastered with political graffiti and posters. The most affecting photos convey both the horror of the situation and the character of the people who carry on resolutely in the face of pain, decay, distractions and obstacles. One particularly memorable photo shows three schoolboys stepping atop a brick pile from a demolished wall and building as a determined, slightly hunched elderly woman makes her way past in front of the rubble.

Four of the most stunning photos have no people in them. The remains of Ringrone Castle (circa 1223) stand in stark isolation over a fog and cloud shrouded Bay of Kinsale. A masterfully composed photo of an old school house north of Portmagee in County Kerry, (used for the cover of the book) helps us imagine the lives of children attending an isolated, storm-battered school building situated on a rocky hill that affords a view for miles and miles. Photos of railroad tracks along miles of spectacular winding coastline in Downhill, Northern Ireland, and a donkey peering from boulders at the base of Bloody Foreland in Count Donegal are both spread across the crease of the book; the layout decision to expand the images beyond a single page enables them to better convey the dramatic interplay of land, sea, cloud and light.

Looking at Higgins’ pictures, I remember my own childhood, and of the upbringing of friends, relatives, and acquaintances throughout the Merrimack Valley. A 1983 picture of schoolgirls on a Cork City sidewalk could well have been two of my classmates walking to Haverhill’s St. James School in the 1960’s. A young couple standing on the edge of the road outside of Burger Sam’s in Belfast could be mistaken for a pair of teenagers leaving a 1960s burger joint somewhere in Massachusetts.

James Higgins has preserved a unique era in Irish history with North and South Ireland: Before Good Friday & The Celtic Tiger. This Loom Press publication will stir memories, inspire imaginations, and extend the knowledge of readers who add it to their libraries. To order the book, visit www.loompress.com or choose amazon.com if the buyer prefers.

Mike McCormick grew up in the Merrimack Valley and now lives in Alaska. He visited many of the locales photographed for this book during an extensive Irish journey in 1980. When he returned to Ireland in 2016, he realized much of what he ‘d seen and experienced on his earlier trip was gone. Mike is thankful that these photos help return him to the now mostly lost world that he experienced forty years ago.