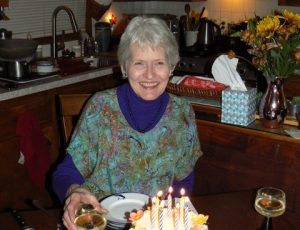 Remembering the artist Carol Durand of Dracut, former director of the Whistler House Museum of Art and cultural activist in Lowell in the 1980s and ’90s, particularly. She passed away after a long illness. By way of San Antonio, Texas, and Mass. College of Art in Boston, her roots in Lowell go back to the mid-1960s when my older brother Richard’s Gallery 21 at 21 Hurd Street near the District Courthouse became a hub for younger artists in the city, a new generation believing a “Lowell Renaissance” was possible . . . and needed. Carol and a cluster of likeminded painters, singers, writers, photographers, and crafts-makers stayed with the effort through the actual cultural revival in Lowell. Carol helped to create the Lowell Cultural Plan, released in 1987, making it the first such comprehensive cultural development plan for a city in Massachusetts.

In later decades she identified as a quilter as well, and belonged to a Hudson N.H. group. She is survived by her husband, the teacher Jim Nolan, and her son, Joseph, and his wife, Lene Harbott.

Here’s a link to her funeral notice.

And here’s an essay about the Lowell Bohemians of the Sixties that I wrote for the Lowell Historical Society’s Newsletter in 2008. I dropped as many names as in a classic Mary Sampas column in the Lowell Sun. It’s important to recall this formative period in the Lowell comeback over the decades. Carol was on the front line in her younger days.